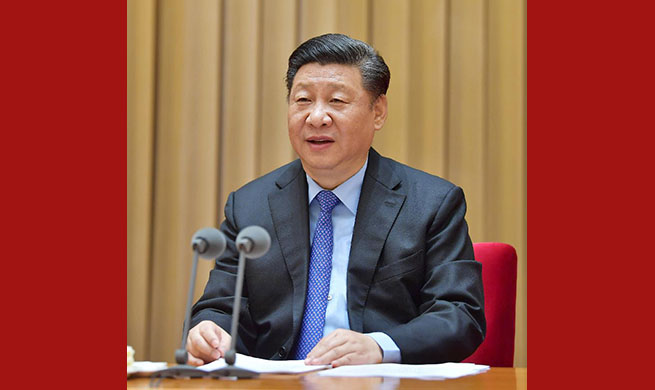 Chinese President Xi Jinping, also general secretary of the Communist Party of China Central Committee, chairman of the Central Military Commission, and head of the Central Cyberspace Affairs Commission, speaks at a national conference on the work of cybersecurity and informatization held from April 20 to 21 in Beijing, capital of China. (Xinhua/Li Tao)

Chinese President Xi Jinping called for "keenly" grasping the historic opportunity for informatization development in a bid to build the country's strength in cyberspace.

Xi, also general secretary of the Communist Party of China (CPC) Central Committee, chairman of the Central Military Commission, and head of the Central Cyberspace Affairs Commission, made the instruction at a national conference on the work of cybersecurity and informatization held from Friday to Saturday.

Since the 18th CPC National Congress, China has achieved historic progress in the development of cybersecurity and informatization, formed a model of cyberspace governance with Chinese characteristics, and developed a strategic thought to advance the country's strength in this regard, Xi said.

Xi urged improving the governance capacity in cyberspace and developing a governing network led by the Party.

Internet service providers should take responsibility to prevent cyberspace from degrading into a platform full of harmful, false, and provocative information.

Efforts should be made to enhance self-discipline of the internet industry, and mobilize all sectors to take an active part in cyberspace governance.

China will fiercely crack down on criminal offenses including hacking, telecom fraud, and violation of citizens' privacy, he said.

Stressing that the country will endeavor to achieve breakthroughs in core information technologies, Xi said more resources will go into researches, industrial development, and policy making.

The development of cybersecurity and informatization should contribute to China's drive to develop a modernized economy and achieve high-quality development, and to the new model of industrialization, urbanization, and agricultural modernization, Xi noted.

Efforts should also be made to develop the digital economy, promote deep integration between the internet, big data, artificial intelligence, and real economy, and make the manufacturing, agriculture, and service sectors more digitalized, smart, and internet-powered, he said.

The people-centered development vision should be upheld throughout cyberspace development, and the people's wellbeing should be the starting point and footing for IT development, Xi said.

Xi urged enhancing military-civilian integration in the field of cybersecurity and informatization, calling it a key and cutting-edge frontier field with the greatest vitality and potential in the integration drive.

He called for putting in place a comprehensive and highly-efficient network of integration.

Xi said it is a general trend and common aspiration of the people to promote the reform of the global cyberspace governance system by sticking to a multilateral approach with multi-party participation from the government, international organizations, internet enterprises, technology communities, non-governmental institutions, and individuals.

Cyberspace governance under the framework of the United Nations should be advanced and non-state entities should play a better role, he said.

He called for strengthening cooperation with countries along the Belt and Road in internet infrastructure, digital economy, and cybersecurity to build a digital silk road of the 21st century.

Xi also stressed the centralized, unified leadership of the Party over cybersecurity and informatization.

While presiding over the conference, Premier Li Keqiang said Xi has pointed a clear direction for development in grasping the historic opportunity of the information revolution, enhancing cybersecurity and informatization as well as stepping up the building of an internet power.

In his concluding remarks, Wang Huning called for concrete measures to implement Xi's speech, a "guiding document" for cybersecurity and informatization in the new era.