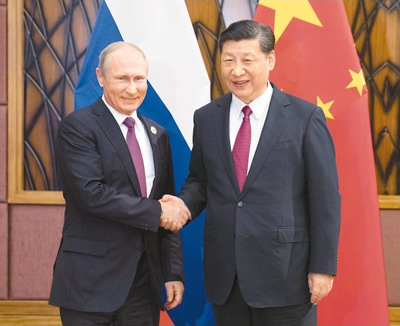 Chinese President Xi Jinping and Russian President Vladimir Putin exchanged congratulations on their respective election win in a telephone conversation on Monday and pledged to further deepen relations between their two countries.

Putin's successful re-election as Russian president is a right choice made by the Russian people, Xi said, adding he believed that under Putin's leadership, the Russian people will definitely continue to focus their attention and energy and forge ahead in unity to keep making new achievements in national development and revival.

Currently, both China and Russia are at a crucial period of national development and rejuvenation. This year is the first year for implementing the spirit of the 19th National Congress of the Communist Party of China (in October 2017) and also marks the 40th anniversary of the adoption of the policy of reform and opening-up to the world (in 1978), Xi said.

In addition to the election of a new state leadership and leadership of the CPPCC National Committee, important proposals such as constitutional amendment and a draft supervision law were approved while a new round of institutional restructuring of the State Council has started, he added.

These developments will be in the better interest of uniting and encouraging the Chinese people in the struggle for realizing the Chinese dream – the great rejuvenation of the Chinese nation, Xi said.

Noting that he very much agrees with the important ideas on such areas as national construction, improvement of the people's livelihood, and scientific and technological innovation Putin proposed in his recent state of the union speech, Xi said he believed both China and Russia will stick to their own development paths in the predetermined directions and make new achievements.