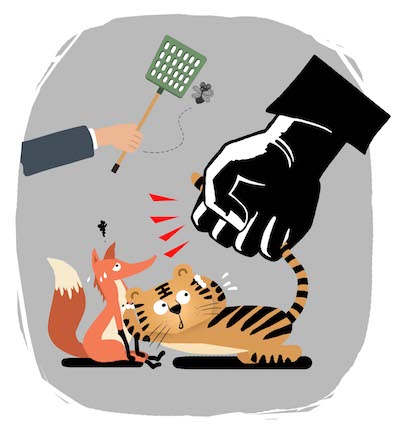 Under President Xi Jinping's anti-corruption campaign dubbed “catching the tigers and flies,” the Communist Party of China has penalized 1.54-million party members―including 440 centrally administered officials―over the past five years.This development prompted Xi, also the party's general secretary, to sustain his anti-graft campaign to “take out tigers,”“swat flies” and “hunt down foxes” among party officials, low-ranking party members and those who went on exile with their loot.

In his report to the party's 19th National Congress at the Great Hall of the People here, Xi stressed his campaign to rid the party of corrupt members to ensure compliance with party discipline and adopt the eight-point decision to improve the party and the conduct of the government.“We have taken tough action against the practice of formalities for formalities’ sake, bureaucratism, hedonism and extravagance, and have staunchly opposed privilege-seeking,” Xi said.

“The disciplinary inspections have cut like a blade through corruption and misconduct, they have covered every party committee in all departments at the central and provincial levels. No place has been out of bounds, no ground left unturned, and no tolerance shown in the fight against corruption. We have taken firm action to take out tigers, swat flies and hunt down foxes.”Xi said the goal of creating a deterrent against corruption had been initially attained, the cage of institutions that prevents corruption had been strengthened, and moral defenses against corruption were in the making.

“With firm resolve, we have tightened discipline and improved party conduct, fought corruption and punished wrongdoing, and removed serious potential dangers in the party and the country,” the CPC declared.While gains have been attained in the party's anti-corruption campaign, Xi admitted that the drive must be sustained to secure “a sweeping victory in the fight against corruption.”

Yang Xiaodu, deputy secretary of the CPC's Central Commission for CCDI, said its disciplinary inspection and supervision departments across the country had received about 1.55 million cases of corruption in the past five years, and some 58,000 people had been endorsed to judicial departments for corruption.The CPC Central Committee implemented its major anti-corruption campaign in 2012, targeting so-called high-ranking “tigers” and low –level “flies.”

“A total of 440 officials at or above provincial or corps level have been investigated, including 43 members and alternate members of the CPC Central Committee, as well as nine members of the CCDI,” Yang told reporters at the sidelines of the party's 19th National Congress.