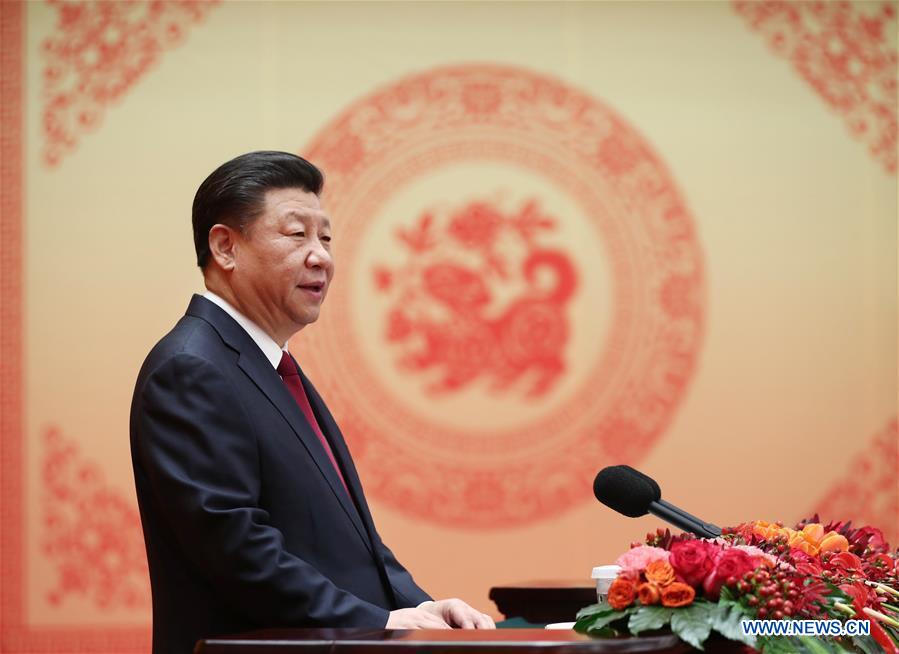 Chinese President Xi Jinping, also general secretary of the Communist Party of China (CPC) Central Committee and chairman of the Central Military Commission, delivers a speech to a festival reception at the Great Hall of the People in Beijing, capital of China, Feb. 14, 2018. Xi Jinping, on behalf of the CPC Central Committee and the State Council, extended Spring Festival greetings to all Chinese people Wednesday. (Xinhua/Ju Peng)

Chinese President Xi Jinping's Spring Festival greetings to all Chinese people with references to hard work and family values on Wednesday have struck a chord with overseas Chinese.

Addressing a festival reception at the Great Hall of the People in Beijing on Wednesday, Xi extended his greetings to all Chinese on the mainland, as well as in Hong Kong, Macao, Taiwan and abroad.

In his speech, Xi encouraged the Chinese people to continue their hard work in a "new era" following the 19th National Congress of the Communist Party of China (CPC) held in October 2017.

He also praised the multiple achievements made by the Chinese people in the past year, and called on them to uphold traditional family values at this time of the year in which family reunion carries great significance.

Liu Hao, a senior member of the Chinese Association of Brazil, said one part of Xi's speech where the president said "happiness can only be earned by filling one's life with endeavors" had inspired him.

"I was deeply touched by that," Liu said. "For us living abroad, only by carrying forward the spirit of hard work can we earn a life in a foreign land."

Echoing Xi's call to focus on realizing people's aspirations for a better life, Zhang Guoquan, head of the Federation of Associations of the Chinese Community in Rome, said it is high time that people like him strive for the realization of a better life for overseas Chinese, contribute to China's reform and opening-up, and facilitate the development of China-Italy economic and trade relations.

"By contributing to the Italian economy, we improve our own lives as well," Zhang said, adding that hard work will indeed lay the foundation for a happy life.

Qi Zihan, a businessman who has been working and living in Qatar for 17 years, said that the overseas Chinese's struggle for personal perfection has always been closely linked to the homeland's economic development, and that a smooth career path for an overseas Chinese is underpinned by the prosperity of the homeland.

"The Chinese economy has been developing by leaps and bounds ... Overseas Chinese nowadays are feeling a greater sense of pride and witnessing a surge in business opportunities," Qi said.

Ever since he became general secretary of the CPC Central Committee in November 2012, Xi has made realizing the Chinese Dream, which he further interpreted as "the great rejuvenation of the Chinese nation," a priority of the CPC.

In his speech on Wednesday, Xi also urged the people to integrate their personal and family dreams with the Chinese Dream.

"We should pool the wisdom and strength of more than 1.3 billion Chinese people in more than 400 million households to strive for the great success of socialism with Chinese characteristics for a new era and realize the Chinese Dream of national rejuvenation," he said.

Inspired by Xi's remarks, Liu Hongyou, president of the federation of the Chinese community in Japan, told Xinhua: "While enriching and improving ourselves, we overseas Chinese should also make our share of contribution to the development of the homeland."

Liu had just arrived in his hometown of Nanjing in eastern China from Japan, where he is based.

"China has developed so fast since its reform and opening-up 40 years ago. It has sailed into the ocean of community of shared future for mankind, just like President Xi has stressed," Liu said.

Li Li, president of a cultural society organized by Chinese people living in Britain, said she was moved by Xi's visit to families in the mountainous Daliangshan region in southwest China on Monday.

After listening to Xi's "affectionate wishes and inspirational words" on Wednesday, she said she was excited and proud of China's achievements and growing global influence since the 18th CPC National Congress.

"We overseas Chinese will continue to carry forward the love for our homeland and contribute to the great cause of the rejuvenation of the Chinese nation," she said.