Chinese President Xi Jinping on Monday sent a message to his Russian counterpart Vladimir Putin to express condolences over a massive shopping mall fire that killed at least 56 people in Russia's south central city of Kemerovo.

In the message, Xi said he was shocked at the news of the fire, which caused huge casualties and property losses.

On behalf of the Chinese government and the Chinese people, and also in his own name, Xi deeply mourned those killed in the fire and showed sympathy to the bereaved families and those injured.

Chinese Premier Li Keqiang also sent a message to his Russian counterpart Dmitry Medvedev to express condolences over the fire.

The fire, which started Sunday afternoon at a four-story shopping center, was put out near Monday noon, but rescue efforts are still going on, with dozens of people still missing, including many children. 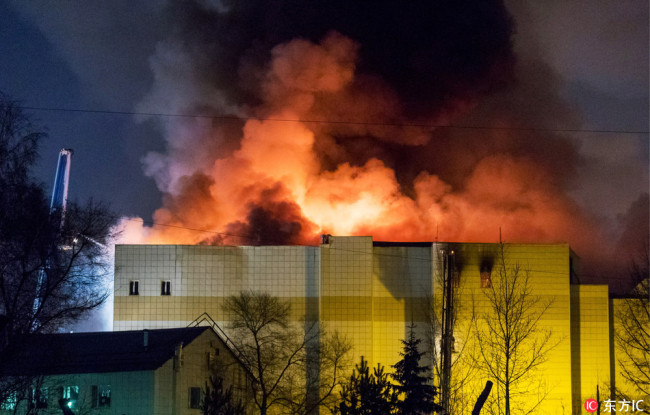 A fire breaks out at a shopping mall in Russia's south central city of Kemerovo. (Photo: IC/Danil Aikin/TASS)