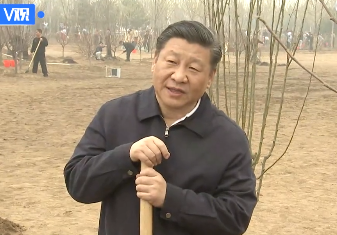 Xi, also general secretary of the Communist Party of China (CPC) Central Committee and chairman of the Central Military Commission, made the call when joining a voluntary tree planting activity in Beijing.

Leading officials at various levels should lead other officials and the public to plant trees voluntarily and treat the ecological environment as important as their lives, Xi said.

The president carried water with some students while asking them about their studies and physical training and urging them to raise the awareness of environmental protection.

Stating that afforestation has long been a fine tradition of the Chinese nation, Xi said that "we plant trees here to fulfill our legal duties."

Equal importance should be given to both quality and quantity in land greening programs while taking a greening development path that is scientific, ecological, and frugal.

Xi urged leading officials to continuously expand forest areas, and improve the quality of forests and the ecological system and its stability.

They should do a good job in land greening and enrich their ways of performing duties in planting trees voluntarily, Xi said.