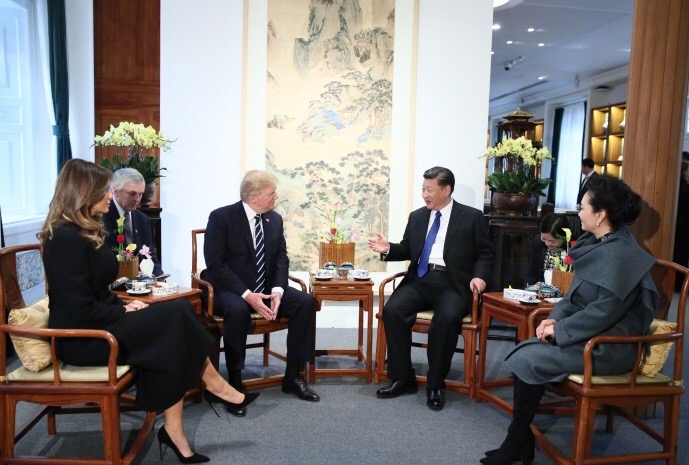 Chinese President Xi Jinping and his wife Peng Liyuan welcomed their US counterparts with an informal afternoon tea at the Palace Museum Wednesday afternoon.

US President Donald Trump and his wife Melania Trump arrived in Beijing earlier on Wednesday.

They had the afternoon tea in the Baoyun Building, also known as the Hall of Embodied Treasures, in the southwestern corner of the Forbidden City.

Xi thanked his guests for their kind reception at the Mar-a-Lago estate when he visited the United States in April and wished them a pleasant time in China.With a tablet computer, Trump showed Xi and Peng video clips of his granddaughter, Arabella Kushner, singing in mandarin and reciting a part of the Three-Character Classic and ancient Chinese poems.Xi spoke highly of the child's Chinese skills and said her performance deserves an "A+."Arabella is already a child star in China, said Xi, adding that he hoped she would visit China in the future.

Built in 1915, the Baoyun Building is a Western-style building in the former imperial compound. It was used to store antiques, but now serves as an exhibition hall for the museum's history.

The Forbidden City, the former residence of China's imperial families during the Ming (1368-1644) and Qing (1644-1911) dynasties, is a national landmark and a UNESCO World Heritage Site.

It covers about 72 hectares with a total floor space of approximately 150,000 square meters.