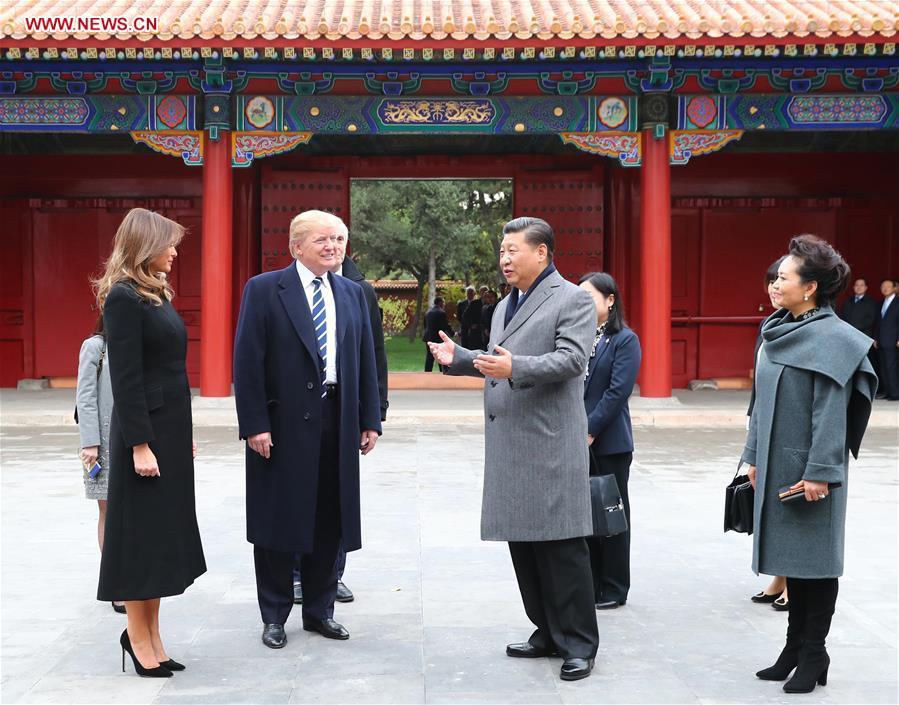 China and the US announced Thursday that the two sides have signed deals worth more than $250 billion during US President Donald Trump's China visit. The staggering figure reflects the unrivaled scale of Sino-US economic cooperation, and reminds people of the difficulties in managing and coordinating it.Trump said that he doesn't "blame" China for the trade deficit. He then faulted past US administrations "for allowing this trade deficit to take place and to grow" and questioned "who can blame a country for being able to take advantage of another country for the benefit of their citizens." Trump has softened his tone toward China on the trade issue.In fact, China hasn't taken advantage of the US, and isn't capable of selfishly manipulating trade in the era of globalization. China has no strength or leverage to forcefully guide the international division of labor. But Chinese are diligent, don't crave excessive profits, and are willing to make every effort to meet the demands of the international market, and therefore China's trade is growing despite immature domestic conditions.The combined cost of American products is too high. Except for high-tech products and high-end services, average American products are heavily encumbered by costs, yet Americans are unwilling to sell products with cutting-edge technologies to China. This is the root cause of the Sino-US trade imbalance.We believe Trump will gradually understand why the US has a trade deficit with China after looking into the actual situation of Sino-US trade. China isn't to blame, and the US should appreciate China's efforts to reduce the trade deficit by buying more American products.The way the Sino-US trade frictions are alleviated is also applied to other areas. For instance, past US administrations made a mess of the North Korean nuclear issue, making Pyongyang determined to develop nuclear weapons at all costs. Washington boasts that it has a number of options to address the nuclear crisis, but none of them has worked, and hence it turns to Beijing for help. China has tried its utmost, even at the sacrifice of Sino-North Korean relations. Trump has gradually learned that Beijing is indeed making selfless contributions to promoting the denuclearization of the peninsula. He can't demand more.Trump expressed gratitude for the reception he was given in China on Twitter. China has not only shown him respect, but also to the US' national interests. Beijing has the right to safeguard China's national interests, but meanwhile has a strong sense of considering the interests of its largest trading partner and is striving for win-win cooperation.The lists, on which China and the US announced consensus, are long, covering almost all aspects of the bilateral relationship and major international affairs. These consensuses can generally ensure the smooth development of Sino-US relations. As long as the cooperative spirit is spread to all fields of Beijing-Washington exchanges, no problem will pose a fundamental challenge to bilateral relations.Trump has not yet made public his Asia-Pacific strategy, but his China tour will be a key reference for his Asia policy. From the Mar-a-Largo summit to the Forbidden City visit, Sino-US ties are becoming more mature.