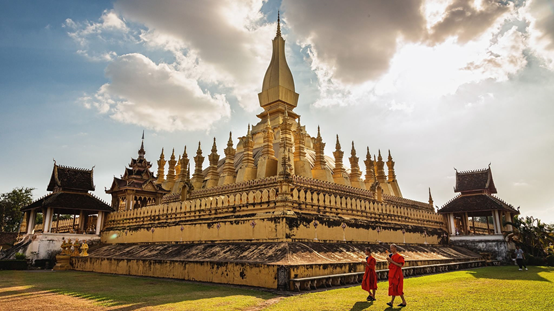 Chinese President Xi Jinping on Monday reviewed the China-Laos relations as "friendly socialist neighbors" and called on both sides to jointly build a community of shared future with strategic significance.

Xi made the remarks in a signed article published in Laos' mainstream media including the Pasaxon (the People), Pathet Lao and the Vientiane Times as he embarked on a two-day state visit to the Southeast Asian country.

Describing the two countries as "friendly socialist neighbors with shared ideals, the same social systems and similar paths of development," the Chinese president said the relations between the two countries have withstood the test of time and the changing global environment, leaving behind many "touching stories."

In modern times, Xi said, the comprehensive strategic cooperative partnership between China and Laos has been expanding and political mutual trust has been cemented.

The two sides "have always treated each other as equals and supported each other in exploring innovation in socialist theories and practice, in fully advancing economic, political, cultural and social development and in accelerating modernization," the article wrote.

"China-Laos relationship sets an example of good neighborliness and all-round cooperation between China and its neighbors," Xi said.

Noting that China and Laos have forged a "common destiny" by the common mission and ideals, the Chinese president urged the two countries to build a community of shared future with strategic significance.

To accomplish this mission, the two sides need to strengthen strategic communication to cement mutual respect and trust, jointly upholding the rights and interests of developing countries, Xi said.

China and Laos should enhance the complementarity of their development strategies through mutual assistance, advancing construction and operation of major projects such as China-Laos railway, economic cooperation zones, satellite, and hydropower stations, he noted.

He also urged both countries to expand practical cooperation for mutual benefit in areas including electricity, connectivity, finance, energy, and infrastructure, and to increase people-to-people exchange featuring mutual learning.

As Laos, in 2018, will co-chair the Lancang-Mekong Cooperation (LMC) framework, of which China and Laos are both important members, the Chinese president promised that China will work with Laos to "promote sub-regional development and bring more benefits to countries and peoples in the region."