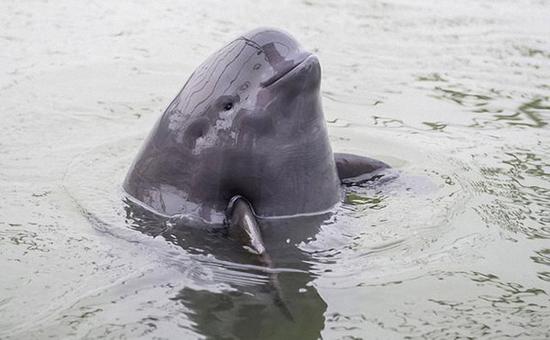 A Yangtze finless porpoise is seen in Poyang Lake in January. (Photo/Xinhua)

The Yangtze finless porpoise remains in extreme danger of extinction despite intensified efforts in recent years to protect the rare species, which is endemic to China's longest river, according to the most recent national survey.

The total number of the finless porpoises is estimated at 1,012 - with 445 in the main channel of the Yangtze River, and 567 in Dongting and Poyang lakes, two large freshwater lakes linked to the river, Yu Kangzhen, vice-minister of agriculture and rural affairs, said at a news conference on Tuesday.

The animals numbered just 1,045 in 2012, he said. It is listed as critically endangered by the International Union for Conservation of Nature. The survey was carried out by the ministry between Nov 10 and Dec 31. Researchers assessed the porpoises' population and distribution, Yu said, noting that there had been a 10 percent decline of the animals in the Yangtze, compared with a previous survey by the ministry in 2012, while the number of the porpoises in the two lakes increased.

"The rapid decline in the number of Yangtze finless porpoises has eased over the past few years," he said. "But they are still in extreme danger of extinction and face severe challenges."

The number of the species dropped by more than half between 2006 and 2012, but the decline slowed noticeably between 2012 and last year, Yu said.

"Human activity is still the major threat - water pollution, construction and overfishing," he said. "These have shrunk the porpoise habitat and can cause accidental deaths. In the first half of the year alone, more than 10 of the dolphins died because of human activity."

The ministry has taken steps in recent years to improve the reproduction of the species outside its habitat, including setting up eight nature reserves for the species along the Yangtze River and Dongting and Poyang lakes, he said.

Ma Yi, the ministry's chief fishing supervisor for the Yangtze, said the ministry is working with the National Forestry and Grassland Administration on a proposal to the State Council, China's Cabinet, to upgrade the species to a Category 1 animal for national protection. The porpoise is currently on the Category 2 list.

Yu said more efforts are needed to protect the porpoises from extinction, adding that the ministry has made special plans to intensify protection, including protection of its habitat, guiding more animals to reserve zones and promoting research in artificial reproduction.

The Chinese baiji dolphin, another major mammal once common in the Yangtze, was declared functionally extinct in 2007. It has not been seen since. Many experts have argued for stricter protection of the Yangtze river porpoise so it will not go down the same path