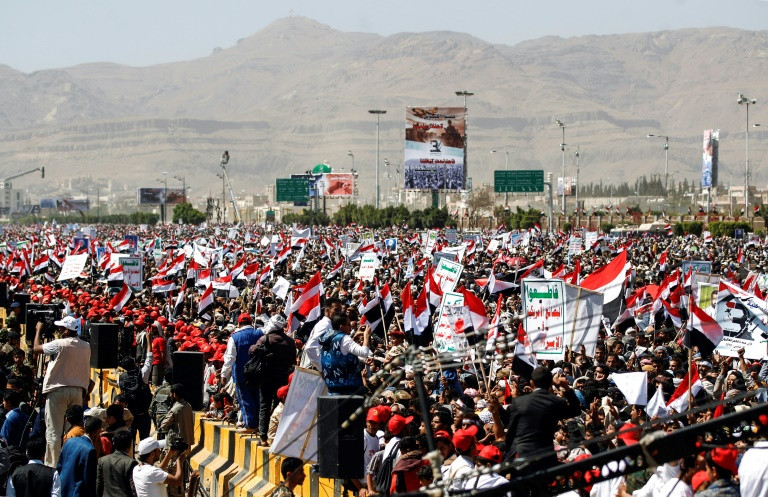 Supporters of Yemen's Huthi rebels attend a rally marking the third anniversary of the Saudi-led coalition's intervention in Yemen, in the capital Sanaa on March 26, 2018 (Photo: AFP)

Hundreds of thousands of Huthi rebel supporters flooded the streets of Yemen's capital Monday to mark three years of war, hours after Riyadh said it had intercepted seven missiles fired from rebel territory.

A Saudi-led military coalition intervened in Yemen on March 26, 2015 to try to restore the government of President Abedrabbo Mansour Hadi after the Iran-backed Shiite Huthis and their allies took over large parts of the country, including the capital Sanaa.

After the missile attacks that resulted in the first reported death in the Saudi capital, Sanaa's Sabaeen Square was a sea of Yemeni flags on Monday as rebel authorities ordered all schools and government offices shut for the anniversary.

War songs, poems and speeches condemning the United States, the main arms supplier for the Saudi-led coalition, echoed across the square.

"No one can speak on behalf of the Yemeni people. The people taking to the streets today are the real voice," Ibtisam al-Mutawakel, head of a Huthi cultural committee, told AFP.

About 10,000 Yemenis have been killed and 53,000 wounded since the start of the coalition intervention in Yemen, which triggered what the United Nations has called the world's worst humanitarian crisis.

The rebels remain in control of the capital, northern Yemen and the country's largest port.

Saudi authorities announced Sunday night they had intercepted seven missiles fired from Yemeni territory, including one that caused the death of an Egyptian labourer in Riyadh, killed by falling shrapnel.

The Huthis said on their Al-Masirah television that Riyadh's King Khalid International Airport was among the targets.

Abdul-Moteleb Ahmed, 38, died instantly in his bed when what appeared to be burning shrapnel struck his ramshackle room in Riyadh's Um al-Hammam district, leaving a gaping hole in the roof, according to witnesses interviewed by AFP at the site.

Three other Egyptian labourers in the same room were wounded and hospitalised, they said.

"He was the father of two young children and the sole breadwinner for his family," another roommate said, standing amid smashed furniture and scattered piles of debris.

Experts have cast doubt on the near-perfect interception rate reported by Saudi Arabia, which says it relies on a US-made Patriot missile defence system.

Amnesty International, which has criticised both parties in the Yemen war for neglecting civilian safety, on Monday said the "indiscriminate" Huthi missile attack "could constitute a war crime".

The rights group has also slammed the Saudi-led alliance for possible war crimes in Yemen.

Britain on Monday urged Iran to "stop sending in weapons which prolong the conflict", with Foreign Secretary Boris Johnson saying he was "appalled" by the attack and would stand "shoulder to shoulder" with Riyadh.

The US State Department also said Washington would support the Saudis' "right to defend their borders against these threats".

Rebel leaders have sought to highlight the role of the United States in the Saudi-led intervention.

At Monday's rally, Saleh al-Sammad, head of the rebels' Supreme Political Council, said the rebels were "ready to reach an understanding" to end the intervention and the coalition's blockade of Yemen.

"It is the Americans who are directing this aggression and participating directly on a number of fronts," Sammad told the rally.

The Hadi government, for its part, said Monday that the overnight attacks on Saudi Arabia amounted to "an open rejection of peace".

The US Senate last week rejected a bipartisan bid to end American involvement in Yemen's war, voting down a rare effort to overrule presidential military authorisation.

The US has provided weapons, intelligence and aerial refuelling to the Saudi-led coalition.