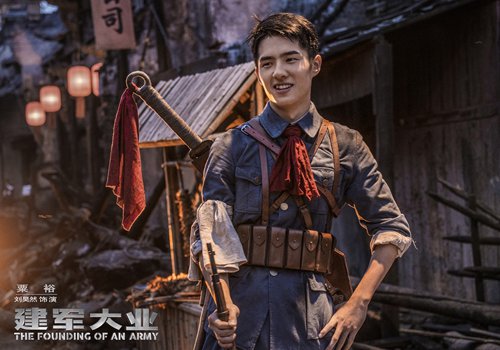 Chinese actor Liu Haoran stars as Su Yu in The Founding of An Army Photo: VCG

If you've been to the cinema in the Chinese mainland recently, you may have noticed that in addition to the short commercials marketing the latest big-name brands, China's young pop idols are also popping up in a series of short public welfare advertisements. This is just part of a recent trend in which China's young stars are taking an increasingly active part in patriotic productions. Appearing after July 1 of this year, the ads are being produced by China Central Television with the support of China's State Administration of Press, Publication, Radio, Film and Television (SAPPRFT). Titled Glory and Dream - Our Chinese Dream, this series of four ads features 32 of China's hottest movie stars such as Jacky Chan and Donnie Yen reciting ancient Chinese poems or passages from major works in order to illustrate major Communist Party of China (CPC)'s political ideology including core socialist values, the Chinese Dream and the Four Comprehensives. Cinemas choose which one of the four nearly four-minute long ads to show before the main feature starts. The series "aims to help the Chinese public better understand CPC policies in a way that can be more easily accepted by the average Chinese," wrote a July report on 1905.com, an online movie news platform subordinate to CCTV's movie channel. 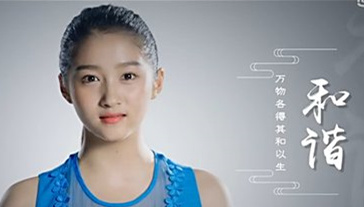 Guan Xiaotong in Glory and Dream - Our Chinese Dream. (Photo: Courtesy of iQiyi.com)

Taking an active partAmong the 32 stars, around a quarter are young stars belonging to China's Post-1990 generation. The youngest is 18-year-old Chinese singer and actor Wang Junkai. Almost all the young stars appear together in the ad that promotes core socialist values, which is probably why this ad and the Chinese Dream ad featuring Jacky Chan and Wu Jing, the star and director of the blockbuster movie Wolf Warrior 2, are the two most commonly shown ones.Audience response toward the ads has been relatively positive, according to a survey carried out by CCTV's movie channel in early July. "I think the ads caught my attention due to involvement of young pop stars, such as Zhao Liying, who starred in the latest hit TV drama Princess Agents," one young female moviegoer told CCTV.A similar ad project titled Our New Era is also on its way according to a 1905.com report from December 20. "Our New Era will focus on the 'new' and will incorporate more innovative and popular cultural elements," wrote the report, seemingly hinting at the involvement of more fresh faces from pop culture in China.Besides government-led ad campaigns, young stars have also been actively participating in other patriotic productions. In late September, mainland boy band YHBOYS, made up of seven members aged 10 to 13, released their cover version of patriotic song "Country."  Garnering more than 300 million views since it debuted on streaming platform v.qq.com, the song's music video sees the seven singers, dressed in white shirts with symbolic "Young Pioneer" red scarves around their necks, singing lyrics such as "family is a miniature country and country is home to thousands of families…"In a similar vein, Wang Junkai and 20-year-old Chinese actress Guan Xiaotong appeared together in music video singing the patriotic song "Chinese Dream" along with a youth choir. Supported by the Communist Youth League of China and produced by the China Youth Daily, the video quickly garnered more than 200 million views just days after its debut on Chinese streaming platforms in late November. 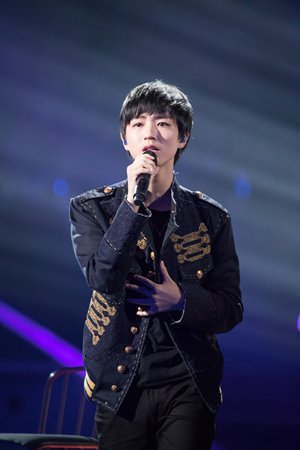 Patriotic rolesAlthough it's not unusual to see popular 20-something Chinese idols star in patriotic Chinese films, it is rare for one film to star a dozen of them. Yet, this is exactly what happened when The Founding of an Army debuted on August 1. Memorializing the 90th anniversary of the founding of the People's Liberation Army (PLA), the Andrew Lau film is the last work in a patriotic trilogy that includes 2009's The Founding of a Republic, which depicted the events leading up to the founding of the People's Republic of China, and 2011's Beginning of the Great Revival, which delved into the birth of the Communist Party of China. The Founding of an Army sees 24-year-old actor Ou Hao play General Ye Ting (1896-1946) as a young man, while 20-year-old actor Liu Haoran stars as PLA General Su Yu (1907-1984) long before he rose in the ranks.However, the casting sparked controversy before and after the film's premiere. Some descendants of these military heroes depicted in the film even wrote a joint letter to express their anger, saying that the producers "chose young stars simply due to their popularity and not because they fit the roles." But there are Chinese moviegoers who loved the stars' performance. "These young stars performed beyond my expectations," Zhou Quan, a moviegoer, told the Xinhua News Agency in August.The reliance on star power looks like it will continue into the new year. Highly-anticipated military film Operation Red Sea, which debuts during the important Chinese New Year holiday, stars 25-year-old idol Huang Jingyu.