HEADLINE Your cellphone can be unlocked by an orange peel!

Your cellphone can be unlocked by an orange peel! 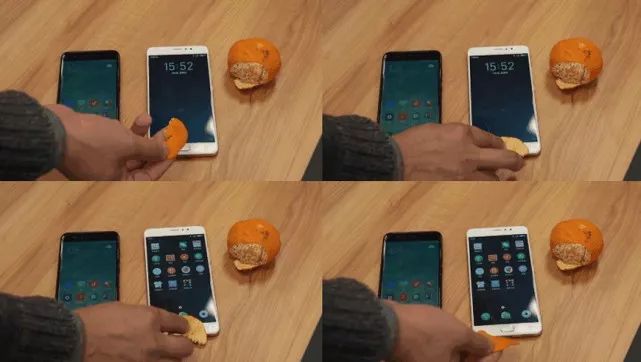 A man holds an orange peel to unlock the cell phone. (File photo)

An article posted on Sina Weibo created an uproar after it showed a broken cellphone being unlocked with an orange peel. The device was originally meant to be unlocked with the owner's fingerprints. Authorities have probed the incident, CCTV reported.

The article says a mobile phone with a shattered screen belonging to a man in eastern China’s Anhui Province. The man accidentally found that his cellphone could be unlocked by anyone's fingerprints even with a piece of orange peel after it was damaged in a fall. Technicians said that the crack formed a new pattern on the touch screen which is erroneously recognized as the owner's fingerprint. Hence, the device could be unlocked by anything pressed against it.

Theoretically anything that forms a pattern on a cell phone's touchpad and that is then recognized as the owner's fingerprints can unlock it, and be used for WeChat and paypal payment.

Actually, reliability of the fingerprint recognition technology used by cellphone manufacturers is a critical factor.

Generally the fingerprint recognition of an iPhone is more secure than that in an android cellphone which uses a software that can be hacked. The iPhone uses an independent module specially for data protection and encryption which is more reliable.

However, unlocking of the phone in the video has raised concerns over the reliability of the security technique that could have been compromised to save cost.

Experts say mobile phone users' information security should be given top priority. New and flashy technology should be combined with adequate security.

Amid ever-shifting hacking techniques, Cellphone makers should improve their products' performance and security, they added.