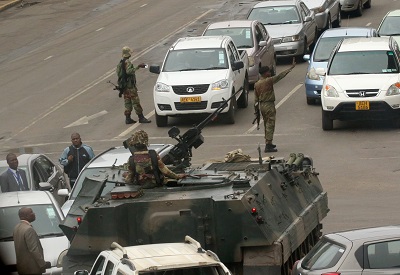 Johannesburg (People's Daily) - Zimbabwe military officers have denied on public television on Wednesday the reports that a coup is underway in Zimbabwe.

Soldiers had earlier taken over the headquarters of the ZBC public broadcaster.

A photo released by the Associated Press shows a military tank and armed soldiers blocking the road leading to President Robert Mugabe's office in Harare on Wednesday. The Zimbabwe army said Mugabe and his wife are safe and sound, and so is the capital.

Some Chinese people living in Harare said the city is peaceful and life is normal except for some armed cars parked outside the president's office. Some roads, under the watch of heavily-armed soldiers, have been closed.

The day began with several reported explosions in Harare and soldiers stationed at the headquarters of the ZBC public broadcaster.

Around 4:00 am, Zimbabwe's army denied on television that a coup was underway in Zimbabwe. It's not "a military takeover," they assured.

The military said Mugabe and his family were safe. AFP said a witness had reported heavy firefights near his home. "We are only targeting the criminals around him ... as soon as our mission is accomplished, we expect the situation to return to normal," according to an army statement.

Reuters reported that the army has blocked access to official buildings (ministries, parliament, courts) and contacts with several personalities, including the minister of finance, who are being held by the army. The minister is a representative of the "Generation 40" (G40), a younger fringe of members of the ruling Zanu-PF party. The president's wife, Grace Mugabe, who holds a prominent position in the party, intends to succeed the presidency.