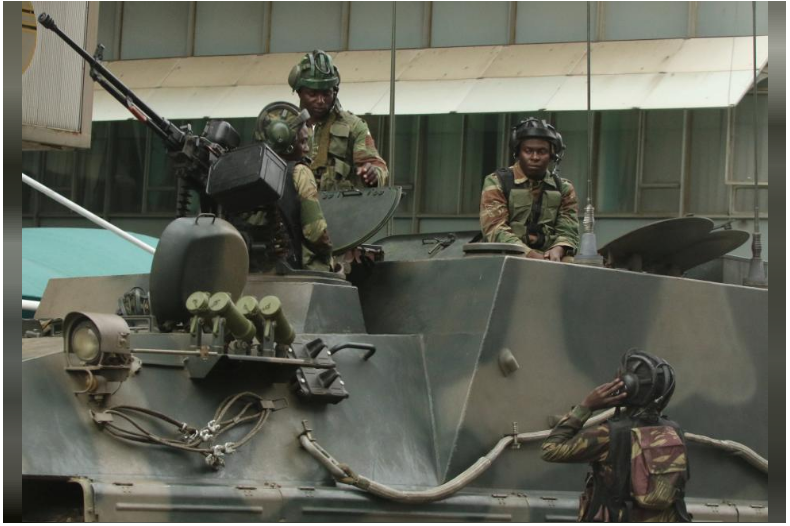 Soldiers are seen on the armored vehicle outside the parliament in Harare, Zimbabwe, November 16, 2017. REUTERS/Philimon Bulawayo       Photo: Reuters

A smiling President Robert Mugabe was pictured shaking hands with Zimbabwe’s military chief a day after the army seized power, throwing confusion over predictions that the 93-year-old’s nearly four-decade rule had come to an end.

Mugabe unexpectedly drove from his lavish “Blue Roof” Harare compound in Harare, where he had been confined since troops took to the streets, to State House, where official media pictured him meeting military chief Constantino Chiwenga and South African ministers sent to mediate the crisis.

The official Herald newspaper carried no reports of the outcome of the meeting, leaving Zimbabwe’s 13 million people in the dark as to what was happening as night fell on Thursday.

Mugabe is insisting he remains Zimbabwe’s only legitimate ruler and is refusing to quit, but pressure was mounting on the former guerrilla to accept offers of a graceful exit, sources said on Thursday. 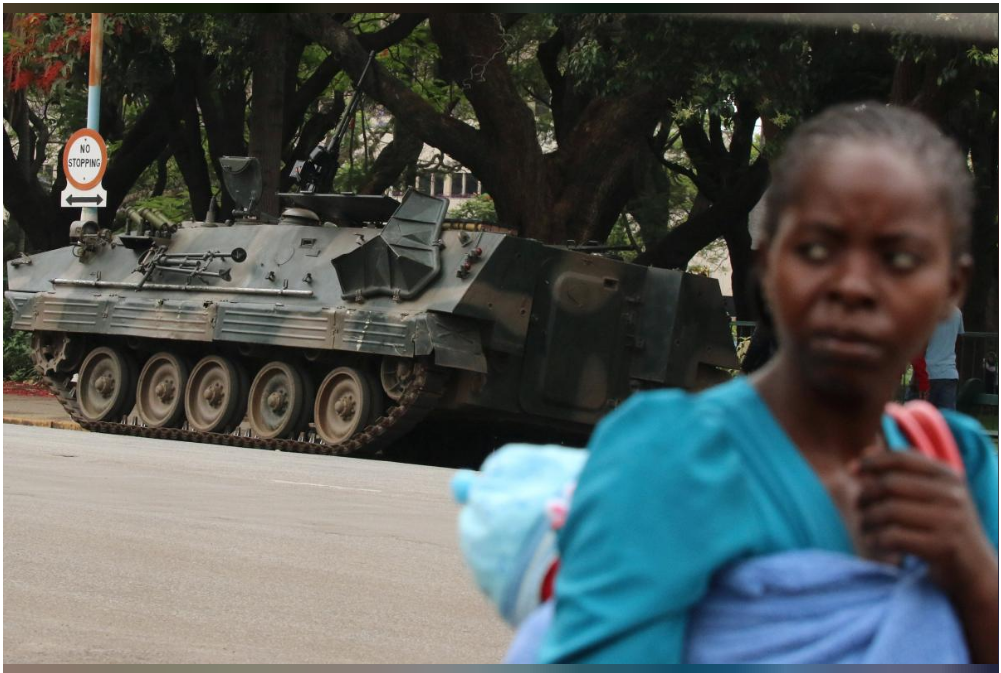 Earlier, a political source who spoke to senior allies holed up in the compound with Mugabe and his wife Grace said he had no plans to resign voluntarily ahead of elections due next year.

“It’s a sort of stand-off, a stalemate,” the source said. “They are insisting the president must finish his term.”

The army’s takeover signaled the collapse in less than 36 hours of the security, intelligence and patronage networks that sustained Mugabe through 37 years in power and built him into the “Grand Old Man” of African politics.

A priest mediating between Mugabe and the generals, who seized power on Wednesday in what they called a targeted operation against “criminals” in Mugabe’s entourage, has made little headway, a senior political source told Reuters.

Opposition leader Morgan Tsvangirai called for Mugabe’s departure “in the interest of the people”. In a statement read to reporters, Tsvangirai pointedly referred to him as “Mr. Robert Mugabe”, not president.

The army may want Mugabe, who has ruled Zimbabwe since independence in 1980, to go quietly and allow a smooth and bloodless transition to Emmerson Mnangagwa, the vice president Mugabe sacked last week triggering the political crisis.

The main goal of the generals is to prevent Mugabe from handing power to his wife Grace, 41 years his junior, who has built a following among the ruling party’s youth wing and appeared on the cusp of power after Mnangagwa was pushed out.

The last of Africa’s state founders still in power from the era of the struggle against European colonization, Mugabe is still seen by many Africans as a liberation hero. But he is reviled in the West as a despot whose disastrous handling of the economy and willingness to resort to violence to maintain power pauperized one of Africa’s most promising states.

Once a regional bread-basket, Zimbabwe saw its economy collapse in the wake of the seizure of white-owned farms in the early 2000s, followed by runaway money-printing that catapulted inflation to 500 billion percent in 2008.

After briefly stabilizing under a 2009-2013 power-sharing government, when Mugabe was forced to work with the opposition, the economy has once again cratered, with dollars scarce, inflation surging, imports running out and queues outside banks.

A fighter, both literally and figuratively during a political career that included several assassination attempts, Mugabe may now have reached the end of the road.

With the army camped on his front door and the police - once seen as a bastion of support - showing no signs of resistance, force is not an option. Similarly, he has little popular backing in Harare, where he is widely loathed, and his influence in the ruling ZANU-PF party is evaporating.

ZANU-PF youth leader Kudzai Chipanga, a vocal Mugabe supporter, publicly apologized for opposing the army after being marched by soldiers into the state television headquarters to read out a statement, sources at the broadcaster said.

He was then taken back to the army’s main KGVI (pronounced KG Six) barracks in Harare, where Finance Minister Ignatius Chombo is also being held, an army source said. 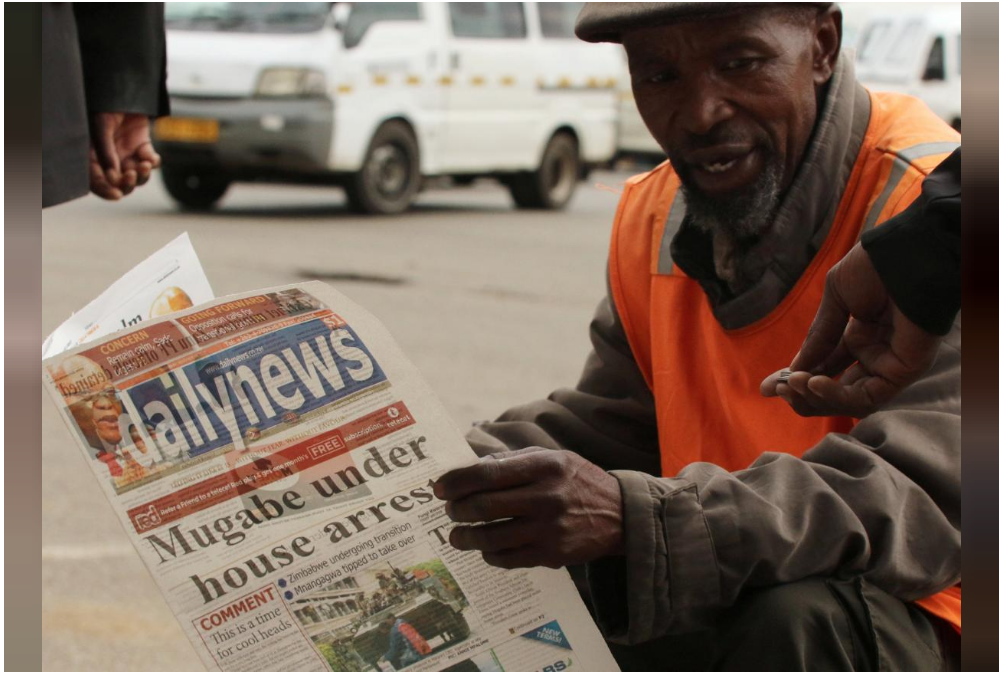 Video footage obtained by Reuters from the houses of two key allies of Grace Mugabe - cabinet ministers Jonathan Moyo and Saviour Kasukuwere - indicated that the army was also prepared to use force if necessary.

Moyo’s front door was blown open with explosives, scattering glass across the entrance hall, while the inside walls of Kasukuwere’s house were pocked with bullet holes.

The pair managed to escape on the evening of the coup and make it to Mugabe’s compound, where they remain under effective house arrest, one political source said.

Zimbabwean intelligence reports seen by Reuters suggest Mugabe’s exit was in the planning for more than a year.

Mnangagwa, a former security chief and life-long Mugabe confidant known as “The Crocodile”, is the key player.

According to the files and political sources in Zimbabwe and South Africa, once Mugabe’s resignation is secured Mnangagwa would take over as president of an interim unity government that will seek to stabilize the imploding economy.

Fueling speculation that this plan might be rolling into action, 65-year-old Tsvangirai, who has been receiving cancer treatment in Britain and South Africa, returned to Harare late on Wednesday.

Ex-finance minister Tendai Biti added to that speculation, telling Reuters he would be happy to work in a post-coup administration if Tsvangirai was also on board.

“If Morgan says he’s in, I ‘m in,” said Biti, who earned international respect during his time as finance minister in the 2009-13 government. “The country needs a solid pair of hands so one might not have a choice.”

South Africa said Mugabe had told President Jacob Zuma by telephone on Wednesday that he was confined to his home but was otherwise fine. The military said it was keeping him and his family, including Grace, safe.

Despite admiration for Mugabe among older African leaders, there is little public affection for 52-year-old Grace, an ex-government typist who began an affair with Mugabe in the early 1990s while his first wife Sally was dying of kidney failure.

In contrast to the high political drama unfolding behind closed doors, the streets of the capital remained calm, with people going about their daily business, albeit under the watch of soldiers on armored vehicles at strategic locations.