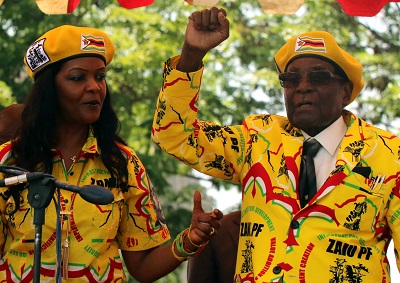 President Robert Mugabe and his wife Grace Mugabe attend a rally of his ruling ZANU-PF party in Harare, Zimbabwe, November 8, 2017. (Photo: By Philimon Bulawayo from Reuters)

Though the Zimbabwe military has denied staging a coup, what has been unfolding in Harare appears to  be the opposite as tanks and soldiers patrol the streets.

According to reports, Zimbabwe's military has taken over the headquarters of the country's national TV station and said in a statement early Wednesday morning that “they are only targeting criminals around President Mugabe,” who was said to be “safe and sound.”

NEWS24, a leading South African news website, said on Wednesday, "Mugabe preparing to step down,” without citing a source or providing further details.

Meanwhile, BBC reported that the ruling party Zanu PF's Twitter account has claimed that Emmerson Mnangagwa has been made interim president, but the account's validity was in doubt. Mnangagwa was fired by Mugabe as vice-president last week. He had been regarded as the most likely successor if Mugabe steps down or dies in office. The sudden dismissal was widely believed to clear the way for Mugabe's wife, Grace Mugabe, who is another key player in the unfolding political turmoil.

Grace Mugabe has been called "Gucci Grace" for her shopping sprees abroad, which were widely criticized because of extreme poverty in the country. She has also become increasingly vocal and active in politics. Her appointment as head of the ruling party's women's league in 2014 prompted even more speculation that she would be her husband's successor.

Analysts believe that Mnangagwa's dismissal signaled Mugabe's break with most of his allies in the ruling party. It is also clear that Mnangagwa enjoys strong support from the country's military, as his dismissal was followed by a statement from the head of the armed forces, who warned Monday that the military will intervene if the purge continued.

The 93-year-old Mugabe has ruled Zimbabwe, once considered as the breadbasket of Southern Africa, since the early 1980s. He was praised as a revolutionary hero to free Zimbabwe from British colonialism, but his drastic economic policies were also blamed for the economic deterioration in the country since the 2000s, as hyper-inflation and high unemployment rates prevailed for years in the country and a large number of young people had to seek employment in neighboring countries.

President Mugabe's situation and whereabouts remain unclear, but analysts believe that this turmoil will most likely change the country's political landscape.