HEADLINE Zuckerberg: Facebook must 'step up' after data scandal

Facebook chief Mark Zuckerberg broke his silence Wednesday on the data scandal rocking the social media giant, apologizing for a "major breach of trust" with its two billion users and vowing to not repeat the mistake. 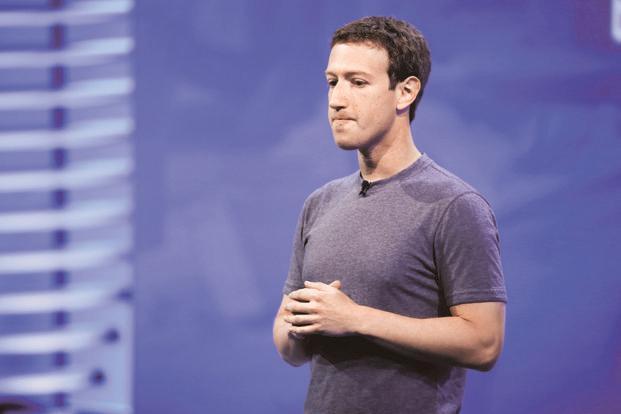 In his first public comments on the uproar over the harvesting of data on 50 million users by a British firm linked to Donald Trump's 2016 presidential campaign, Zuckerberg told Facebook users the firm had "a responsibility to protect your data."

He added that if it didn't, "we don't deserve you."

He promised that Facebook will investigate every application that has accessed large amounts of data at the leading social network, and do full forensic audits if anything looks suspicious.

"This was a major breach of trust and I'm really sorry that this happened," Zuckerberg said in a television interview with CNN.

"Our responsibility now is to make sure this doesn't happen again."

Zuckerberg's comments come after several days during which Facebook shares were pummeled and calls for investigations were launched on both sides of the Atlantic.

Writing on his Facebook page, Zuckerberg said "the most important actions to prevent this from happening again today we have already taken years ago."

"But we also made mistakes, there's more to do, and we need to step up and do it." 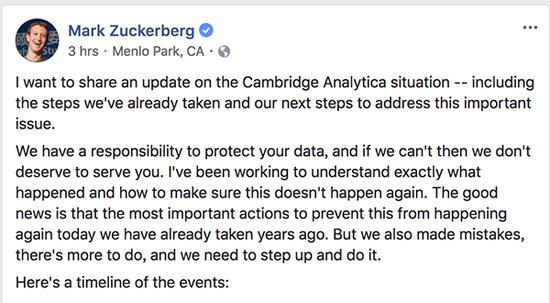 It has emerged that British consulting firm Cambridge Analytica obtained data on millions of people from an app developed by researcher Aleksandr Kogan, which was downloaded by thousands of Facebook users but also scooped up information from their friends.

Zuckerberg said some changes were made by Facebook in 2014 that addressed "abusive apps," and that "these actions would prevent any app like (the one linked to Cambridge Analytica) from being able to access so much data today."

While the transfer of such data is no longer allowed under Facebook rules, Zuckerberg vowed additional measures "to secure our platform."

Those will include an investigation of apps that had access to large amounts of information before the rules were changed, more restrictions on developers' data access and a requirement that developers obtain approval and sign a contract in order to ask anyone for access to their posts or other private data.

He said Facebook would launch a tool "to make sure you understand which apps you've allowed to access your data" which will be featured prominently.

"I started Facebook, and at the end of the day I'm responsible for what happens on our platform," Zuckerberg wrote.

"I'm serious about doing what it takes to protect our community ... We will learn from this experience to secure our platform further and make our community safer for everyone going forward."

During the CNN interview, Zuckerberg said he was open to testifying before members of Congress if he is the person at Facebook best placed to answer their questions, and that he is not opposed to Facebook being regulated.

"I am actually not sure we shouldn't be regulated," Zuckerberg said.

"Technology is an increasingly important trend in the world; the question is more the right regulation than should it be regulated."

For example, he said, he would "love" to see regulations calling for transparency about who is behind online ads.