Zuma calls for calm in Zimbabwe 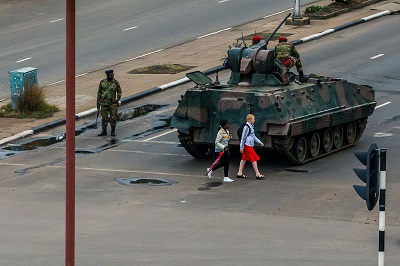 Young women walk past an armoured personnel carrier that stations by an intersection as Zimbabwean soldiers regulate traffic in Harare on November 15, 2017. (Photo: VCG)

In a statement on behalf of the Southern African Development Community (SADC), Zuma expressed concern over the unfolding political situation in Zimbabwe.

"I hope that developments in Zimbabwe would not lead to unconstitutional changes in government, as that would be contrary to both the SADC and African Union positions," Zuma said.

He also urged the Zimbabwean government and military to resolve the political impasse amicably, and called on the military to ensure that peace and security in the country is not compromised.