HEADLINE Zuma must give his answer about eventual departure on Wednesday

Zuma must give his answer about eventual departure on Wednesday 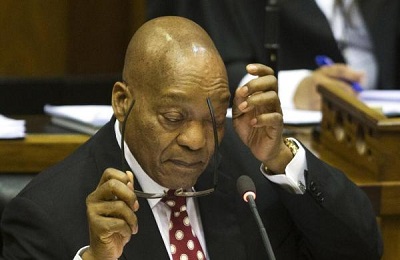 According to News24.com, ANC's national executive committee (NEC) recalled Zuma on Tuesday. Zuma has promised to give his answer no later than Wednesday.

It's official, ANC Secretary General Ace Magashule confirmed to the media on Tuesday that the party's NEC decided on Monday to recall Zuma as head of state.

The decision was made during a 13-hour long NEC meeting that ended in the early hours of Tuesday morning.

"We did not make these decisions because comrade Jacob Zuma has done anything wrong," Magashule said.

This means that the majority of the leaders of the ANC, gathered Monday night, have spoken in favor of a recall.

It is the ANC that reminds the head of state that South Africa is a parliamentary system. The party also has the power to recall him. Especially since there is a new president of the ANC since last December, Cyril Ramaphosa. There are elections in a year, and the NEC of ANC believe that with Zuma the ANC could lose these elections.

Magashule also shot down claims that Zuma's determination to hold on to his position for three to six more months was because of unfinished business around a nuclear deal he had been hoping to have with Russia. The president wanted to participate in the next summit of Brics held in Johannesburg in the coming months, but this request was rejected.

According to Magashule, the ANC wants Ramaphosa to replace the head of state as soon as possible. Finally, he said, "We are waiting for the president's response." For the moment, no date of departure has been set.

The ANC has not set a deadline for Zuma, even though the party has said it is committed to giving its answer by tomorrow, Wednesday. For the moment, between the party and the president, no compromise has been found yet. Moreover, constitutionally, he cannot be forced to submit to the decision of his party and could decide to extend his time.