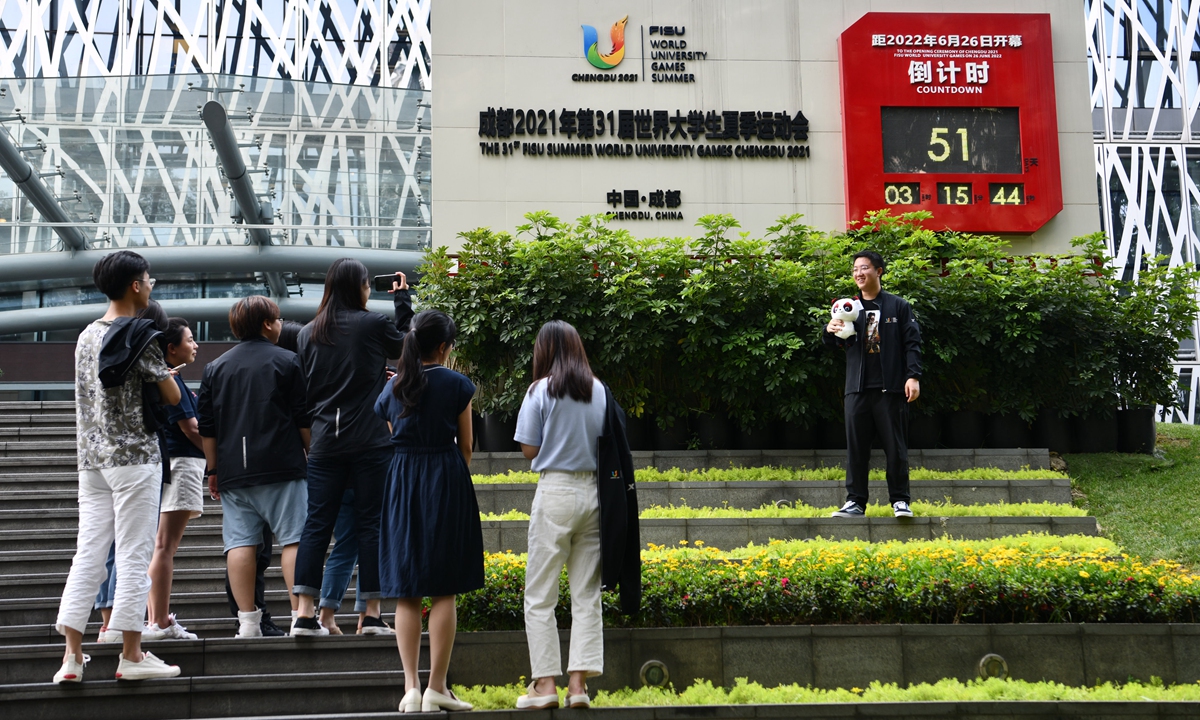 Staff members pose in front of the countdown board for the Chengdu 2021 World University Games. The International University Sports Federation (FISU) announced on May 6 that the Games has been postponed until 2023. (Photo: IC)

Three major sports events to be held in China in second half of 2022, including the Asian Games, have been postponed due to the COVID-19 outbreak, organizers announced on Friday, casting a shadow to the global sports calendar, as well as some athletes' career.

The 2022 Asian Games was scheduled to be hosted in East China's Hangzhou, a city in Zhejiang 200 kilometers from COVID-hit Shanghai, from 10 to 25 September. The Olympic Council of Asia (OCA) announced on Friday that the games have been postponed to 2023, due to the rising number of COVID-19 cases in China.

In An official statement, the OCA praised Hangzhou organizers who were set to deliver the Games on time despite global challenges. However, the decision was "taken by all the stakeholders after carefully considering the pandemic situation and the size of the Games."

Despite the new date which is under discussion and will be announced in the near future, the name and the emblem of the 19th Asian Games will remain unchanged, OCA said.

The OCA added that as the 2021 Asian Youth Games, which was scheduled to be held in December 2022 in Shantou, South China's Guangdong Province, had already been postponed once, will be cancelled entirely.

Also on Friday, 51 days before the opening of the Chengdu 2021 World University Games, the International University Sports Federation (FISU) announced the Chengdu 2021 has been postponed until 2023. The FISU Games had initially been scheduled for the summer of 2021 but were rescheduled for June 2022 following the postponement of the Olympic Games in Tokyo 2020.

Despite being rescheduled, Acting FISU President Leonz Eder praised the preparatory work of Chengdu, the Southwest China city in Sichuan Province. He said the postponement was not a decision made lightly, but is the right decision for university athletes, as their welfare is always our number one priority.

The Global Times learned from a source that despite rumors of postponement dating back to April, Chinese organizers have kept up the preparations ahead of the decision.

After nearly five years of construction, the 56 competition venues of the Hangzhou Asian Games have been completed and passed the comprehensive acceptance on March 31, 2022. The Hangzhou Asian Games Village finished construction on December 29, 2021, offering 108 buildings to provide accommodation, catering and medical services for more than 10,000 athletes and team officials, nearly 4,000 technical officials and about 5,000 media personnel.

Wang Dazhao, a Beijing-based sports commentator, told the Global Times on Friday that the postponement is undesirable, but no stakeholders should be blamed, as everyone has done their best under the circumstances given the epidemic.

He said the postponement is a great loss to the athletes who have prepared for the games for a long time. In addition, with the world of heightened tension, the postponement means a lost opportunity for athletes from different countries to interact through sporting events.