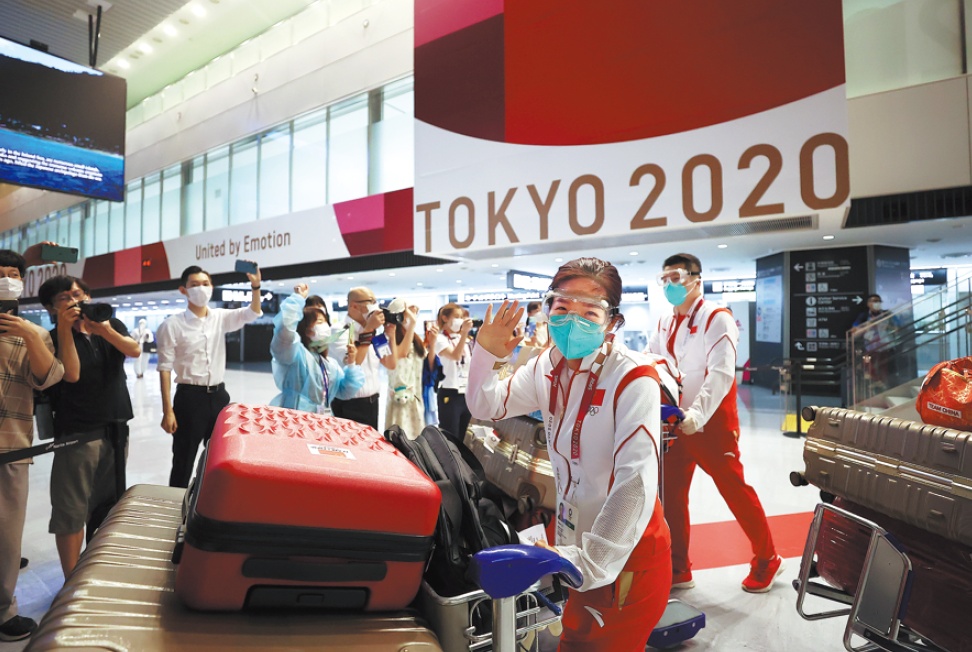 Liu Shiwen, of the Chinese table tennis team, arrives at Narita International Airport in Tokyo, Japan, on Saturday. Other members of Chinese Olympic delegation also arrived in Tokyo on that day.(Photo: Xinhua)

Well prepared and fully protected, China's Olympic teams have arrived in Tokyo safe and sound on a mission to do their country proud at the pandemic-hit Summer Games.

With four days to go before the 2020 Tokyo Olympics open on Friday, the majority of China's 431-athlete delegation had traveled to the Japanese capital on chartered flights by Sunday, kicking off the country's campaign to finish high in the medal tally at the multisports mega event, which was delayed for a year due to the COVID-19 pandemic.

Wearing masks and protective goggles, and some behind face shields, athletes and coaches from China's celebrated Olympics teams, including table tennis, women's soccer and badminton, appeared in high spirits at Narita International Airport over the weekend, to the excitement of awaiting supporters and photographers.

After an extra year of the waiting, Chinese Olympians have been braced for not just athletic challenges, but also strict pandemic-control restrictions at arguably the toughest Olympic Games in history.

"It takes a little longer than before, but the trip is fairly smooth, and my whole team is in good condition and ready for title challenges," Liu Guoliang, president of the Chinese Table Tennis Association, said on Saturday after going through complicated formalities that included a COVID-19 test upon landing in Tokyo.

Some of the teams, arriving in peak hours at the airport, had to wait up to five hours before receiving their negative test results and being allowed to go.

"It's understandable under this special situation during the COVID-19 pandemic, since epidemic-prevention is very important," said Jia Xiuquan, head coach of the women's soccer squad, adding that, regarding the requirements, the stricter the better.

Led by 24 Olympic champions and guided by experienced coaches, including 30 hired from abroad, the Chinese teams will compete on a goal set by delegation chief Gou Zhongwen to stay at least within the top three on the overall medal table in Tokyo, and to try to better China's haul of 26 gold medals at the 2016 Rio de Janeiro Games.

Gou, minister of the General Administration of Sport of China, stressed that it's a top priority that all Chinese athletes have to compete with sportsmanship and discipline, holding a zero-tolerance stance against doping.

China will count on athletes from six traditionally strong sports－table tennis, diving, weight-lifting, shooting, gymnastics and badminton－to bolster its medal hopes. Yet the host's improving strength in both racket sports and the strong competition from the United States in gymnastics and Germany in shooting have heralded tough battles for gold.

Designated to march into the opening ceremony as 111th among the delegations, Team China will be spearheaded by two flag-bearers－men's taekwondo reigning champion Zhao Shuai and women's volleyball star Zhu Ting, who were confirmed by the Chinese Olympic Committee on Saturday as being selected to shoulder the duty of honor.

Zhu helped the Chinese women's squad claim a high-profile gold medal in volleyball five years ago in Rio, and Zhao made history by winning China's first Olympic gold in men's taekwondo when he triumphed in the 58 kg category in Brazil.

"I really appreciate the trust from our delegation. It's a huge honor for me to be named the flag-bearer. I feel greatly motivated by it," said 26-year-old Zhu, captain of the Chinese team.

"Watching our national flag hoisted along with the national anthem is always my goal, and that of the Chinese women's volleyball team as well."