Jones leads No. 2 Duke to 73-64 victory over scrappy Ga Tech 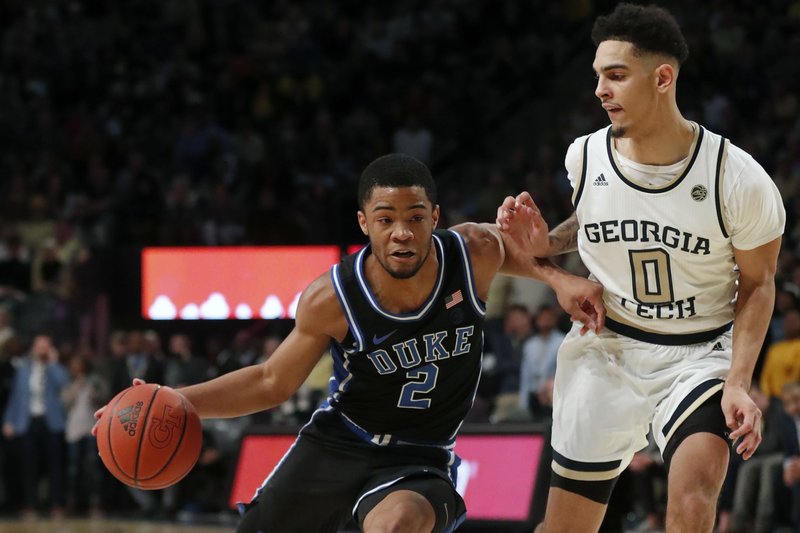 Duke has now gone a decade without losing to Georgia Tech.

Tre Jones scored 16 points on his 20th birthday, including two key baskets down the stretch, and No. 2 Duke held off the Yellow Jackets 73-64 on Wednesday night.

The Blue Devils (14-1, 4-0 Atlantic Coast Conference) extended their winning streak to eight in a row — and their firm hold on this series goes back much further. Georgia Tech (7-8, 2-3) has lost 13 straight to Duke since its last victory over the Blue Devils on Jan. 9, 2010.

“We really sat down on the defensive end those last few possessions,” Jones said. ”Our defense, once again — it seems like we say this game after game, but it’s so true — it’s definitely what’s giving us the wins right now.”

At the offensive end, Jones hit a pull-up jumper that snapped a 61-all tie with 4:17 remaining, putting the Blue Devils ahead to stay. With just under 2 1/2 minutes left, he knocked down a floater in the lane that extended the edge to 68-64.

Quite a gift to himself.

“Today being my birthday, I wanted to play a great game,” Jones said. “I didn’t have the best game, I would say, but down the stretch I just feel so comfortable with the ball in my hands. The coaches are calling plays for me, believing in me, trusting in me. I just took what the defense gave me.”

The Yellow Jackets rallied from a double-digit deficit but couldn’t make a basket in the closing minutes, missing 14 of their last 15 shots.

Their last hoop came with 5:20 remaining.

“We probably got a little tired because we exerted so much energy to get back in the game,” Georgia Tech coach Josh Pastner said. “It’s hard when you get yourself down to a good team like this. You lose your margin of error. We missed lot of short shots at the rim.”

“They knocked us back at the beginning of each half, and our kids responded,” coach Mike Krzyzewski said. “Our kids showed some amazing toughness. They really hung in there.”

Duke appeared to take control with a 12-0 run late in the first half. All six baskets in the outburst were layups or dunks, three of them set up by Georgia Tech turnovers.

The Yellow Jackets went more than four minutes without scoring and suddenly found themselves down 34-22 in a game they led throughout much of the opening period.

Duke went to the locker room with a 40-29 edge after Jones slipped under the basket to tip in a missed 3-pointer by Matthew Hurt, the ball dropping through the hoop just as the red light came on.

Coming off a 13-point victory at North Carolina, Georgia Tech did its best to impress a rare sellout crowd at McCamish Pavilion. A massive line of students wrapped halfway around the 8,600-seat arena, stretching thin a security staff and ticket-scanners who weren’t used to handling these sort of turnouts.

In the end, the Yellow Jackets couldn’t finish off a feat they have not accomplished since 2009-10 — beating Duke and North Carolina in the same season.

Senior forward Javin DeLaurier gave the Blue Devils some key minutes late in the game. He provided a boost at the defensive end and also made two free throws with just under a minute to go to help seal the victory.

“It’s the way our team has been,” Krzyzewski said. “It’s like a collection of guys hopefully doing enough to come up with a big-time win.”

Duke: Played without freshman Wendell Moore Jr., who underwent surgery after breaking his right hand in a victory over Miami last weekend. The 6-foot-6 forward will miss extensive time but is expected to return this season.

Georgia Tech: Michael Devoe, who came into the game leading the Yellow Jackets in scoring at 16.9 points a game, had a tough night. He finished 3 of 11 from the field, including 1 for 6 beyond the arc. The one he’ll really be kicking himself for was an open 3 that would’ve given Georgia Tech a 67-66 lead with less than three minutes to go. It clanged off the rim and went high over the backboard. The Yellow Jackets went scoreless the rest of the way.