Egyptian forward Mohamed Salah and Senegalese forward Sadio Mane are among the footballers in Europe's top five leagues with the greatest estimated transfer values, according to figures released by a Swiss research group. 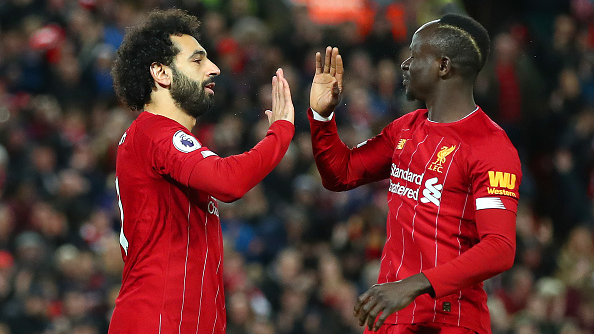 Mohamed Salah of Liverpool celebrates with Sadio Mane after scoring his team’s first goal during the Premier League match between Liverpool FC and Sheffield United at Anfield on January 02, 2020 in Liverpool, United Kingdom. (Photo: CGTN)

Salah is third on the list with a value of €175.1 million while Mane is fifth with a value of €155.6 million. The duo, who both play for English Premier League club Liverpool, who are defending European champions.

The International Centre for Sports Studies (CIES) released a list of 166 footballers who play in Europe's top five leagues (England, France, Germany, Italy and Spain) and are valued at more than €50 million.

The algorithm used by the Swiss firm factors in variables based on the player's performance for club and country, age, position and the economic level of the club they play for.

Other variables put into consideration for the valuation were contract duration, year of transfer, book value, loan status, nationality and the economic level of the recruiting club, which was estimated if it was unknown.

Mane, who was recently crowned CAF African Player of the Year, has scored 15 goals and assisted 11 this season. Salah, who finished as runner-up behind Mane, has netted 14 times and assisted seven.

Salah, Mane and Côte d'Ivoire and Arsenal winger Nicolas Pepe, who is valued €93.3 million, are the only African players to make the top 50 in the list.

Kylian Mbappe of Paris Saint-Germain tops the list with a value of €265.2 million. England and Manchester City forward Raheem Sterling is second €223.7 million while his compatriot at Borussia Dortmund Jadon Sancho is valued at €168.9 million in fourth place.