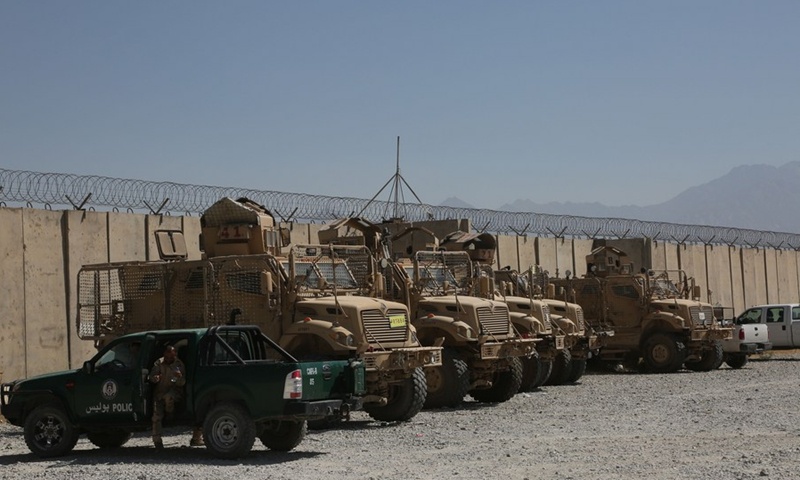 Photo taken on July 8, 2021 shows military vehicles abandoned by U.S. forces at the Bagram Airfield base after all U.S. and NATO forces evacuated in Parwan province, eastern Afghanistan. (Photo: Xinhua)

When US Secretary of State Antony Blinken denied the US' messy withdrawal from Afghanistan by saying "This is not Saigon," he might be right - the US' performance in Afghanistan is even worse than it did in Vietnam 46 years ago.

The US has lost its own face in Afghanistan. It is also facing the collective shame of the Western world caused by accusations against each other among NATO allies. The chaotic scenes of the US withdrawal have been rapidly recorded and put on the internet. Such visual impact on the audience far exceeds that in Vietnam, which mainly relied on words and photography.

As the leader of NATO allies in Afghanistan, the US military controlled the most important military and civilian resources. The US' chaos has made it difficult for allies to withdraw in an orderly manner as well. While mocking the US, many NATO allies have also criticized their own government. To deal with public opinion, these NATO allies have directed criticism at the Biden administration and NATO agencies. Passing the buck to each other has made the US and NATO even more shameful.

How to evaluate the NATO and West's achievements and losses in Afghanistan? How to deal with the follow-up problems after being swept out of the country? This has become an extremely troublesome matter. It may become another topic that tear up the relations between US allies.

In the Vietnam War that also lasted 20 years, the US put smaller scale of investment - about $250 billion (the equivalent of more than $1 trillion today). By contrast, the fact that Taliban rapidly swept the entire Afghanistan and occupied Kabul indicates that the US' efforts on counterterrorism and nation-building over two decades in Afghanistan, which involved 110,000 US troops and more than $2 trillion investment, are in vain.

If Washington could achieve a dignified and orderly withdrawal from Afghanistan, it would to some extent satisfy its NATO allies that have followed the US into war with heavy investments and casualties. But the hasty and chaotic evacuation has amplified NATO allies' cost.

Not only has a great deal of investment been spent with no return, the influence of the US and Europe on Afghanistan has been eliminated. But European countries will also soon have to worry about the prospect of a flood of refugees. Instead of addressing the Afghan issue, the US has created a new and bigger problem. This is not only the realistic cause for the current spat between Europe and the US. It will also become a long-term heavy shadow over the Western alliance system.

To make matters worse, the hasty withdrawal has shaken the confidence of Western allies toward the US, which may disrupt the pace at which the Biden administration reinvigorates US alliance systems.

The "America First" policy of the Trump administration shook the Western alliance system. At that time, what the West mainly concerned was US' willingness to lead the world would drop. But in regard of US' capability, especially its military strength, the West was still confident.

So after the Biden administration decided to revive the alliances and return to multilateralism to show US' leadership in the world, many Western countries gave the US a positive response to seek US security protection. They even follow Washington's steps to confront China and Russia. However, the indecent, chaotic withdrawal of US troops from Afghanistan, has highlighted the failure of US intervention policy.

It has also revealed some of the country's major problems. This includes misjudgment, mis-coordination, inaccurate intelligence and low morale in the US diplomatic and military departments. US allies in the West will have to redefine their interests, and rethink their relationship with the US. As a result, the voices in European countries advocating for strategic autonomy have recently grown louder again.

As US Western allies are questioning its capabilities and seeking more autonomy on policy, Washington's plan for a strategic shift and great power competition by withdrawing from Afghanistan has appeared unreasonable and powerless without support.

Washington is determined to maintain its global hegemony, and it has treated Afghanistan as a discarded chess piece and local human lives as if they were nothing. But unlike the US, most Western countries care more about their own interests and are concerned about "humanitarian crises" including the problem of refugees. But for now, they have discovered that after Washington has made the situation worse, there is more room to advance these interests and deal with their concerns through dialogue and cooperation with Beijing and Moscow.