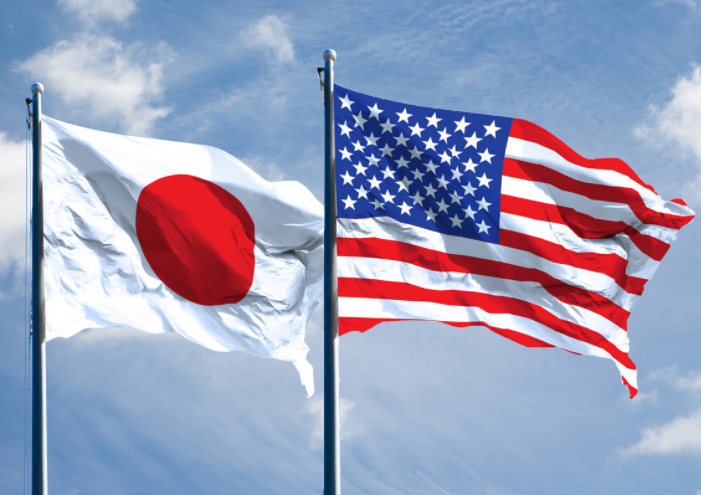 US President Donald Trump made his first visit to Japan on Sunday and Monday. When addressing service members at Yokota Air Base in Tokyo, Trump stressed that US stood "shoulder-to-shoulder" with Japan and that the US-Japan alliance is the cornerstone of regional security.

Trump praised Japan as a "treasured partner" and "crucial ally" of the US and thanked Japan for decades of wonderful friendship, firmly declaring the stability and importance of Japan-US relations to the world and the Asia-Pacific region. He also ramped up his tough rhetoric on North Korea.Japan's Prime Minister Shinzo Abe, whose Liberal Democratic Party won overwhelmingly in lower house elections last month, has been keen to deepen mutual trust between Japan and the US through Trump's visit, in order to deter Japan's rivals and promote his domestic political agenda.

In the economic field, "America First" was a major concern of Trump's trip to Japan. He stressed that the US has been running deficits with Japan for many years and the trade imbalance must be reversed.

Trump denounced the sizable US trade deficit to Japan during last year's election. To this end, Trump and Abe decided to establish an economic dialogue framework to resolve the trade imbalance through deeper dialogue when Abe held talks with Trump in February for the first time.

Trump said he expected Japan to buy a lot of American-made military equipment, which would not only help create jobs in the US, but also better protect Japan against threats from North Korea. And Abe appeared open to Trump's suggestion.

It is worth noting that after Abe said he would cooperate with the "America First" policy economically, he said that the US and Japan had reached a consensus on policy toward North Korea, and Japan would begin to impose sanctions on Pyongyang.

Apparently, Japan is more concerned about security issues than economic issues. Whether the two sides can further strengthen cooperation to prevent North Korea's nuclear and missile development is the biggest focus of their talks. Issues over the regional situation, including responding to China's maritime activities, are also involved. Japan believes that the US security umbrella is vital to Japan's security.

On how to handle North Korea, the two leaders agreed to increase international pressure to the utmost on North Korea to curb its nuclear ambitions and ballistic missile development.

Japan has been cozying up to the Trump administration to bring it onto Japan's presupposed track over the past year. Abe defined Trump's tour as a "historic visit" and said that "there have never been as close bonds between Japan and the US."

However, Trump's "de-globalization" and "America First" policies demonstrate that Japan and the US are not as close as they appear to be. Although Trump did not mention the free trade agreement that Japan has strongly backed, the divergence between the two countries stands out as Japan attaches great importance to rule-making in the Asia-Pacific region. On the other hand, the two leaders' focuses differ. Abe focused on security issues while Trump cared more about business, urging Japan to reverse the trade imbalance between the two sides.Trump's business background still disturbs Abe, who worries that Trump might make deals with other countries at the expense of Japan.

Under the shadow of "Russiagate," the scandal-scarred Trump needs diplomatic achievements to deal with domestic criticism. Anyhow, Trump won't map out the US' Asia-Pacific strategy very soon, but the strengthening of Japan-US relations is a certainty.