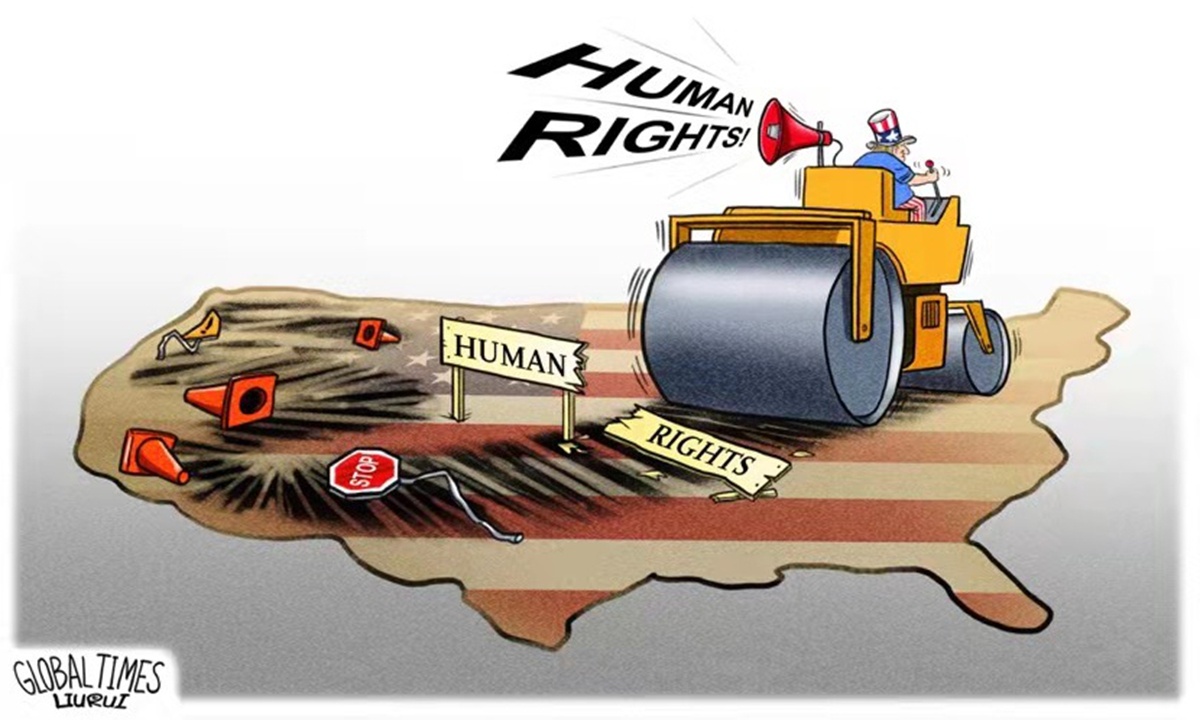 Thursday marked Human Rights Day. If there is a list of countries with severely deteriorating human rights situations this year, the US will be among the top. The US broke a daily record for COVID-19 deaths again on Wednesday, with at least 3,011 new fatalities. This was more than those who died from the 9/11 attacks (2,977).

Partisan politics has caused the institutional abandonment of the virus fight in the US, leading the country to a huge humanitarian tragedy where human lives are treated like grass. The current US administration is actually committing crimes against humanity and it will eventually face a moral trial by history.

Ironically, the US Embassy in China has taken advantage of the day to call on Chinese people to "speak up and step out" to defend "the right to peaceful assembly." But the embassy failed to say anything about the US' deplorable human rights record in 2020. The embassy's appeal on Sina Weibo has been heavily mocked by Chinese netizens.

The human rights situation in the world is undergoing profound changes. The concept of modern human rights originated in the West, and for a long time, the US had a near-monopoly on defining human rights.

However, in recent years, the appeal of the US on human rights issues has been weakening, mainly because the human rights situation in the US has been continuously declining along with the distortion in the economic and social situation. This is a tragedy that the US wants to forge iron, only to find it is not hard enough to be the hammer.

This year's COVID-19 outbreak has been the Waterloo for US "leadership" on human rights. The country has done worse than many developing countries, with the highest death toll and biggest number of cases in the world. Washington has done its best to separate its serious epidemic situation from human rights questions, but it ultimately has to face the apparent link between the two - after all, the high number of innocent Americans killed by the virus is clearly recorded, and other countries who have done a better job is in stark contrast.

In the past, the glory of the US masked its ugliness. Even the situation of poor people in the US was not bad compared with those in the rest of the world. This was the foundation of American society's confidence in human rights. However, the country's economic lead has weakened and the gap between the rich and the poor has widened.

This has led to an erosion of its self-confidence. Its comfortable sense of superiority over human rights has also been undermined and turned into more of an unruly frenzy.

The concept of human rights has been widely accepted in the world. Each country needs to figure out the achievements and shortcomings in its human rights sector and explore the path to develop human rights. Countries which fail to do so will pay a price.

The problem is that the US and some Western countries view human rights as their favorable diplomatic resource. Countries, especially the US, have turned human rights into a tool to pressure other countries, while Washington is not interested at all in whether its moves help human rights development in those countries.

Take Hong Kong. The core of Hong Kong affairs is the resumption of order, but the US labels it as a human rights issue and interferes in it. But the US actions are unlikely to improve "human rights" in Hong Kong, but will only stir up trouble and add costs to the process of China's rise, which is Washington's true intention. It is frustrating that the debate on human rights has been turned by Washington into a geopolitical game.

China, which has been developing fast in recent years, has improved human rights. The independent thinking of the Chinese people toward modern human rights has become mature. The "American idol" has fallen flat, especially since the COVID-19 pandemic.

The Chinese people despise US hypocrisy when it comes to the human rights issue. They witnessed how their government did everything to fight the virus at whatever cost, while what set a stark contrast is that the US government turned a blind eye to its people during the pandemic. Facts speak louder than words. Humanitarianism of the US, a country which lectures China on human rights, has taken a back seat to pumping up the stock market.

China is aware that there is room for improvement regarding its human rights. But it will walk its own path in developing the cause of human rights and develop it in a steady and fast manner.