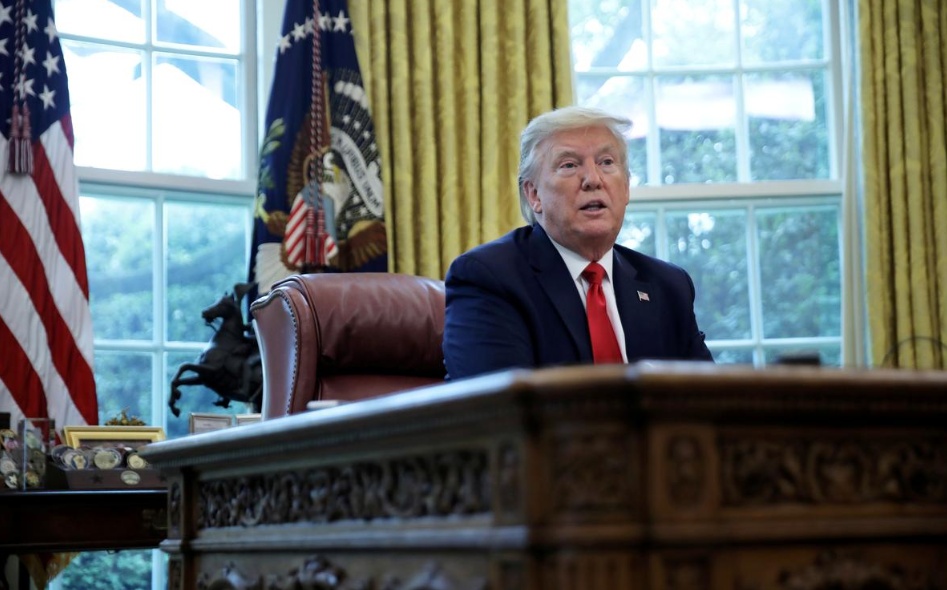 US President Donald Trump answers questions during an interview with Reuters about China, the novel coronavirus (COVID-19) pandemic and other subjects in the Oval Office of the White House in Washington, US, April 29, 2020. [Photo/Agencies]

For the US administration, the heavy loss of life caused by the novel coronavirus — more than 83,000 as of Wednesday, nearly one-third of the world's total — is because the pandemic is a sneak attack on the United States.

When the US president said that it is China that should be asked why the US is still seeing so many deaths and new cases when, as his administration claims, the US has done a much better job than other countries in testing, while taking the question at a news conference on Monday, it is clear that the US leader remains steadfast in portraying China as the enemy, not the virus.

Which is in line with his rhetoric last week when he called the COVID-19 pandemic the "worst attack" on the US — worse than the Pearl Harbor and the World Trade Center — and one that should have been stopped by China at the source. In doing so he is trying to establish a correlation between the two plotted surprise attacks and the novel coronavirus outbreak.

The reasoning seemingly being that since it was a sneak attack, his administration's belated response to the pandemic is pardonable.

Although he skips over it, there is plenty of proof that the virus is natural, not man-made; that there were COVID-19 cases in the US before any appeared in China; and most imported cases in the US are not from China but from elsewhere in the world.

The virus is a common enemy, and the US is in the same trench as China. Indeed, this is a foe of all people, which is being fought on many fronts. Although the first big battle was fought in Wuhan, Central China's Hubei province, where 83 percent of the deaths caused by the virus in China occurred, that does not necessarily mean that is where the virus first attacked.

And were it not for the huge sacrifice made by the residents in Wuhan who endured a lockdown for 76 days, the situation in China and the world would undoubtedly have been more daunting.

After losing the golden opportunity to contain the virus in a concentrated area in the same way, the US has to deal with cross-transmission at the community level nationwide, which means it is jumping the gun in encouraging people to return to work.

To weather the perfect storm that is battering the country calls for decision-makers in the US to give due respect to science and the facts. Something the current administration is loathe to do as it would settle once and for all that the virus is not a Chinese weapon, real or imagined, and make it obvious to all that the US is the one weaponizing the pandemic as a means to attack China.