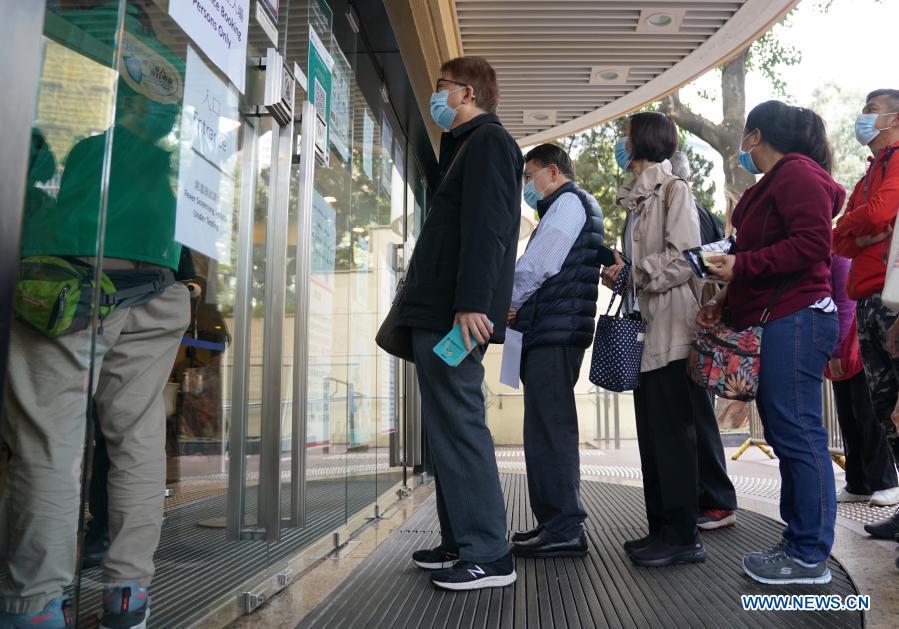 People line up for the COVID-19 vaccination at a community vaccination center in Hong Kong, Feb 26, 2021. (Photo: Xinhua)

On Tuesday, the Food and Health Bureau of the Hong Kong Special Administrative Region government responded to inquiries about COVID-19 vaccines and said that by Monday there were still 2 million doses left unused.

At the same time, the HKSAR government said a total of 2.2 million doses of vaccines have been given to residents, of which 921,500 have already completed their second injection.

Besides, the number of those applying for BioNTech vaccines daily is only about 10,000, or about one-fourth that of the vaccine centers’ capability. The currently stored BioNTech vaccines will expire in mid-autumn, and if the number of vaccination applicants remains so low, the bureau will consider donating the unused ones to avoid wasting precious medical resources.

Later they fabricated more rumors, such as mainland vaccines being of low quality, or that the DNA of Hong Kong vaccinated residents would be sent to the mainland for storage.

These repeated rumors, although refuted almost immediately by the HKSAR government every time they emerged, misled some Hong Kong residents to take a wait-and-see strategy. As the pressure of COVID-19 is still quite heavy, they deal a threat to Hong Kong residents’ health for their own political interests.

Worse, they also curb the recovery of the local economy. Just like Wong Kwok-kin, one LegCo member, pointed out in an interview in December 2020, those who badmouth vaccines from the mainland might drag the recovery pace of the Hong Kong economy, thus hurting the SAR’s prosperity.

In one word, Hong Kong residents pay the price while some “opposition politicians” get political interest. It should be noted that vaccines take time to produce, and in case the pandemic rises again, Hong Kong might not be able to get an ample supply within a short time.

On Tuesday, Ko Wen-je, “mayor” of Taipei city, said his whole city had only two bottles of vaccines left, enough for 20 only. It’s hoped this won’t happen to Hong Kong, and the best way for residents there is to get vaccinated as early as possible.