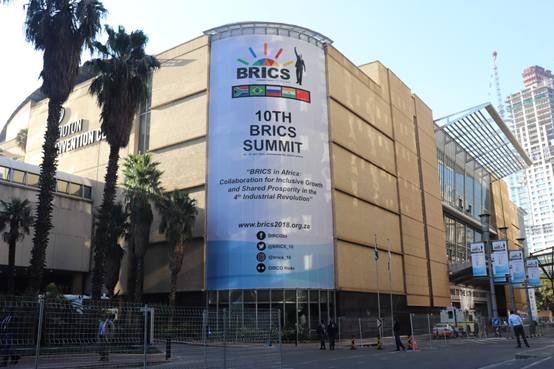 A giant poster of the 10th BRICS Summit hangs on the outer wall of the Sandton Convention Centre. The summit was held in Johannesburg, South Africa from July 25 to 27. (Photo by Liu Lingling from People’s Daily)

South Africa’s largest city Johannesburg is in the mist of an atmosphere of the 10th BRICS summit, as national leaders and business heavyweights gathering in the “rainbow country” are cementing their confidence towards the bright future of the BRICS cooperation.

A series of the “BRICS Plus” events, a legacy of last year’s BRICS Xiamen summit, were arranged a day following the plenary session of the BRICS Johannesburg summit held on Thursday.

“We should expand the coverage of BRICS cooperation and deliver its benefits to more people. We should promote the ‘BRICS Plus’ cooperation approach and build an open and diversified network of development partnerships to get more emerging market and developing countries involved in our concerted endeavors for cooperation and mutual benefits,” Chinese President Xi Jinping’s remarks at last year’s Xiamen summit well explained the “BRICS Plus” cooperation approach. His proposal to expand the circle of friends has set a plan to seek common development.

The “BRICS Plus” cooperation approach has been broadly echoed over the past year. The ongoing Johannesburg summit also includes the BRICS-Africa Outreach and second BRICS Plus Cooperation with Emerging Markets and Developing Countries (EMDCs) into its agendas.

Johannesburg has carried on the momentum for cooperation of Xiamen summit, said Minister of International Relations and Cooperation Lindiwe Sisulu of South Africa, adding that the “BRICS Plus” cooperation approach will give a substantial boost to South-South cooperation.

More than 10 countries from Asia, Africa and Latin America were invited to Johannesburg this time. The invitation sent to these non-BRICS members is a concrete action to implement Xi’s proposal of the “BRICS Plus”, said Russian Foreign Minister Sergey Lavrov.

Thanks to the “BRICS Plus” philosophy, the BRICS cooperation is seeing expanded radiance and coverage. It will become a unique and resilient platform that can link economic integration of different regions.

“BRICS Plus” model suggests infinite possibilities, since the multi-dimensional cooperation creates huge opportunities for common development and prosperity. The BRICS countries will work together with other emerging markets and developing countries for mutual promotion.

"Those who work alone, add; those who work together, multiply." The “BRICS Plus” model will fully release the potential of BRICS cooperation and expand the influence of the mechanism. It is expected to inject more positive energy in driving economic growth, improving global governance and democratizing international relations, and make greater contribution to the lofty cause of peace and development for the mankind.