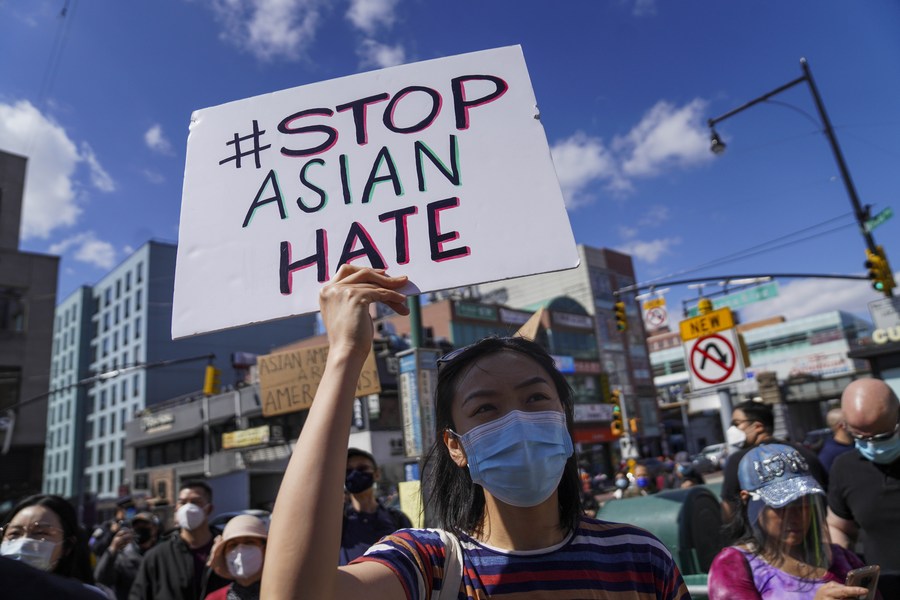 People attend a rally against racism and violence on Asian Americans in Flushing of New York, the United States, March 27, 2021. Photo/Xinhua

An 18-year-old Asian student was brutally stabbed by a fellow bus passenger in Bloomington, Indiana on Saturday. The suspect was quoted as saying she thought the Asian was Chinese.

Indiana University confirmed the attacked girl was their student and blamed the attack on "Asian hate". What they didn't mention is that the Asian hate comes from certain US politicians' tireless "Chinese threat" propaganda.

In the late 1800s and early 1900s, when Chinese workers were building railways in the US, they faced discrimination too, being called "dirty" and "untouchable". Now that China is working to uphold globalization, they see China as a "threat".

That's how Asian hate emerged and has grown. By propagating the "China threat" theory, US politicians and media are widening the split in their own society and encouraging the US people to hate Asian Americans for no reason. By stabbing an Asian student, the perpetrator has exposed the danger that lies in US society.

The cheerleaders there invented the "China threat" fallacy to play international politics, but it is a toxin in US society. The policy aimed at pitting the rest of the world against China has successfully pitted US citizens against US citizens.

To bridge the deep social divide and curb Asian hate, what the US needs to do is not only profess love and brotherhood among different ethnic groups, but also give up its anti-China policy and policy of demonizing this imaginary enemy.