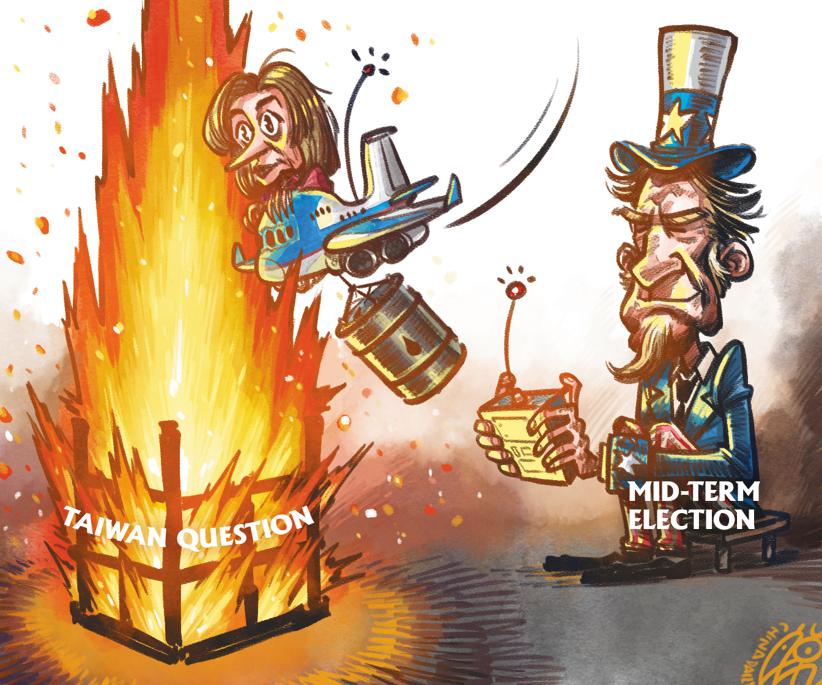 US House of Representatives Speaker Nancy Pelosi made an unnecessary stopover in Taiwan on Aug 2 during her Asian tour. Some Western media reports suggested that since Beijing was vehemently opposed to her planned visit, it could further worsen Sino-US relations and could even trigger a conflict.

Pelosi's spokespeople said she visited the island to project of the United States' commitment to the democracy and counter the Communist Party of China's plan for forceful reunification of the island with the motherland.

I barely pay attention to such reports because they are typical of Western media. But certain words that portray a less bleak future for Asia-Pacific region always catch my attention. So I was all ears for words like "diplomacy", "peaceful dialogue" or just "dialogue". Instead, all I heard was "military action", "Chinese aggression" and "Pelosi's promotion of democracy" repeated ad nauseam.

As a historian, I apply history, nuance and context to whatever I am told to be fearful of. For nuance and context, I kept my ears piqued for Western media reports on Pelosi having easy access to intelligence reports (corporate and government) and being married to Paul Pelosi, owner of real estate and venture capital investment and consulting firm, Financial Leasing Services, Inc.

But I heard no mention of the fact that in 2020, a wave of insider trading allegations were leveled against US Congress members, including Pelosi herself, when it was reported that Pelosi's husband, through his firm, made millions of dollars from almost preternaturally well-timed purchase of Big Tech stocks just when congressional bills affecting those companies were being drafted of finalized behind the closed doors of the Congress.

Congress members are legally bound to disclose trading of stocks worth more than $1,000 and despite the media's efforts to make the allegations seem like a non-issue, the scandal continues with enough evidence to show that some enterprising individuals have built apps that track Pelosi's and her husband's stock purchases.

Amid the war-mongering rhetoric of Nancy Pelosi's visit to Taiwan, one specific stock purchase by Paul Pelosi's firm stood out. On June 17, he exercised call options worth $5 million in shares of US semi-conductor company Nvidia Corp, shares he would later sell, with many social media commentators saying it is odd for Nancy Pelosi and her husband both to disclose they had sold their Nvidia shares at a loss just days before her trip to Taiwan.

Aside from the ethical issue of people in government using their access to intelligence or advance knowledge of legislation for profit, the disclosures beg more scrutiny for three reasons. First, is it the first time that Pelosi and her husband had engaged in such a public act of supposed transparency?

Second is the fact that just several days prior to her visit, the House of Representatives passed the Chips and Science Act of 2022, which includes more than $50 billion investment in the US semiconductor sector with the aim of boosting production. The bill will also provide $52.7 billion in direct subsidies and tax breaks for companies that move their chip production units back to the US. President Joe Biden on Tuesday signed the bipartisan bill to boost domestic high-tech manufacturing.

The third reason is that Taiwan is a global powerhouse in semi-conductor production and much of Nvidia Corp's graphics chip architecture relies on the Taiwan Semiconductor Manufacturing Company. It remains unclear whether Nvidia would benefit from the chips act, because the bill discourages fund beneficiaries from outsourcing their supply chain to companies outside the US. However, from July 6 to Aug 6, Nvidia's stocks climbed from about $148 to $192 each. It seems this time around, the Pelosi missed out on making profit by selling their stocks at the wrong time, though the "loss" of about $341,365 pails into insignificance compared with the gains they made.

For example, the $5.3 million Paul Pelosi's firm profited in 2021 by exercising a call option on Google's parent company, Alphabet, that its stock price would rise just one week before the House of Representatives Judiciary Committee voted 21-20 in favor of a six-part, anti-trust Ending Platform Monopolies Act aimed at reining in the power of Big Tech companies such as Google, Amazon, Apple and Facebook to monopolize their services.

At the time, many market watchers thought the six-part, outwardly well-intentioned bill would see Big Tech stock prices slide. Yet to the contrary (and Paul Pelosi's delight), they rose when investors saw the bill posed no real threat to the influence of Big Tech in the US. Perhaps the fact that so few know of Paul Pelosi's impeccable timing is a testament to the exercise of the very power the law was supposed to weaken.

So was Nancy Pelosi's trip to Taiwan, and unnecessarily loud disclosure of financial loss, a convenient attempt to quell the allegations plaguing her and her husband? Or was it a convenient convergence of interests from a divided nation? Perhaps both? Who knows?

But one thing is certain: the Western media rely on people having increasingly shorter and shorter memories, and no notion that whenever the US claims it is spreading democracy, what actually it does is to sow divisions, and spread anarchy and fear.