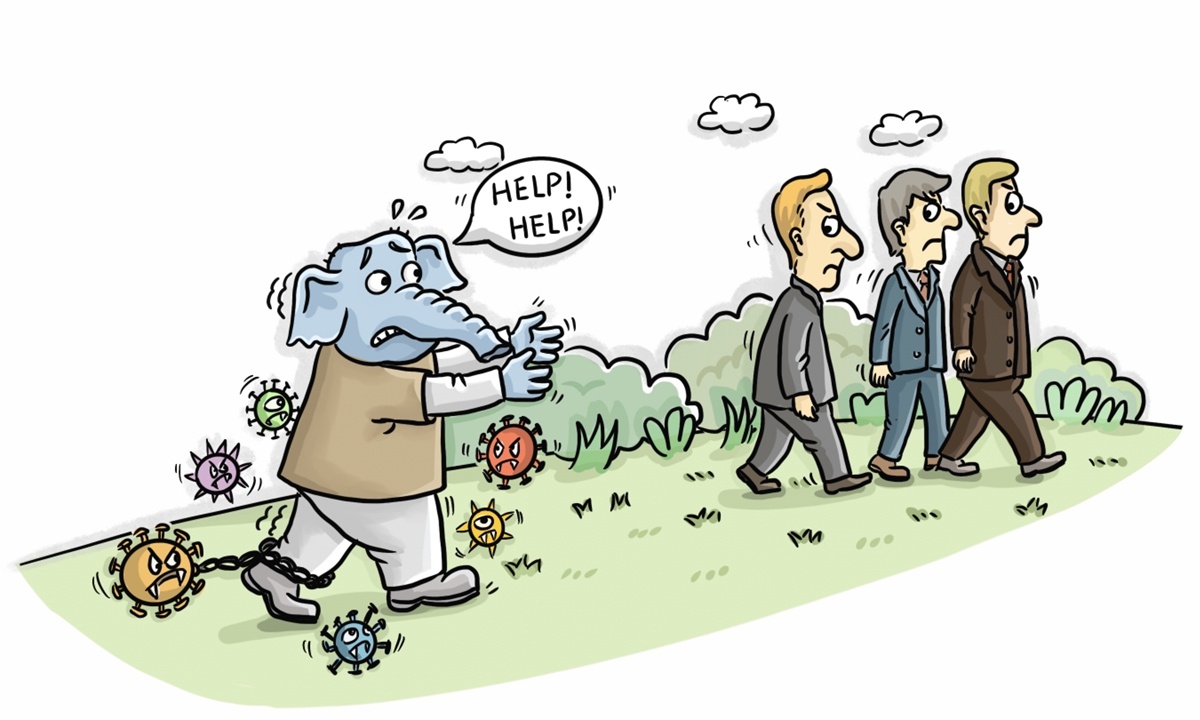 India is experiencing an unexpected wave of denunciation from the Western media lately, thanks to the uncontrollable COVID-19 situation across the country. "Indian government tightens its grip on Twitter as COVID-19 cases surge," an article in France 24 titled. The Wall Street Journal claimed that "Modi's party is poised for gains" as the Indian prime minister held massive campaign rallies amid the spread of the coronavirus. "The world sent India millions in COVID aid. Why is it not reaching those who need it most?" CNN asked.

Indeed, the epidemic in India has led the whole country into a state of disorder. The way that the Indian government deals with it exposes the inability of the government and the fragmentation of Indian society to the West.

The West used to place high hopes on India. It believes India, which claims to be a major power, could play a vital role in containing China. What the West sees now is a country that has no ability to save itself out of a crisis. To the West's dismay, it witnessed China's strength and robust manufacturing power. This is what India lacks. The West finds that it is fine for India to talk about confronting China. But once something real occurs, New Delhi clearly does not have the ability to handle it.

The course of Western opinion toward India may change. This could happen at the official level, from companies and among the public. For quite a long time in the past, the West boasted about India's importance. India hailed the US as the most developed democracy. And the US praised India as the world's largest democracy. Ironically, these two democratic countries are the hardest hit by the coronavirus. During the policymaking process to fight the pandemic, the outside world did not see the essence of democracy. Public opinion was not really respected in the two countries.

The West often talked with India about "common values," which include democracy, freedom and human rights. This was nothing but rhetoric. India's cooperation with the US and other Western countries has nothing to do with democratic values - only geopolitics. The fundamental aim is to cope with the so-called challenges and threats from a rising China. The West has played up Indian democracy only to prove how "undemocratic" China is and that China's path to steer away from Western democracy is a mistake.

From their deep heart, Western countries are well aware that with the many defects, India's ability and national strength is fragile. Among the so-called like-minded countries of democracy, India is the weakest link. At present, some opinions are associating India with the term "authoritarian." As an article in Foreign Policy magazine put it, "even longer-lasting damage has been done to India's soft power, which was already dented under Modi's authoritarian regime." The New Yorker magazine argued about whether or not India's democracy can regenerate. It said that it seems "a less certain prospect."

Meanwhile, the anti-US sentiment is exacerbating in Indian society. This is due to the US' refusal to lift the ban on raw materials to make vaccines. It is also magnified by the US indifference to the Indian people's sufferings during the initial stage of the coronavirus outbreak. Although the Indian government has been downplaying it, such sentiments are expected to hinder New Delhi's coordination with US foreign strategies.

When a country cannot properly handle its domestic issues and is in a state of poverty and underdevelopment, it can hardly contribute to the international community. India has been pursuing a permanent seat in the United Nations Security Council. But this membership requires responsibility that India is actually incapable of bearing. The epidemic will impair India's ambitions to become a global power. It will undermine the opinion of the international community from neighbors and the West alike. If the West continues to brag about India, it will only show its hypocrisy.

But this doesn't mean that the West will give up India. The West is poised to contain China, and will continue to exploit India's usefulness. It has no other alternative in the Indo-Pacific region. Moreover, the feud between China and India is always there - the border disputes between the two will not be solved in a short time. And India's hostility toward China will remain.