OPINIONS 'I don't take responsibility at all'

'I don't take responsibility at all' 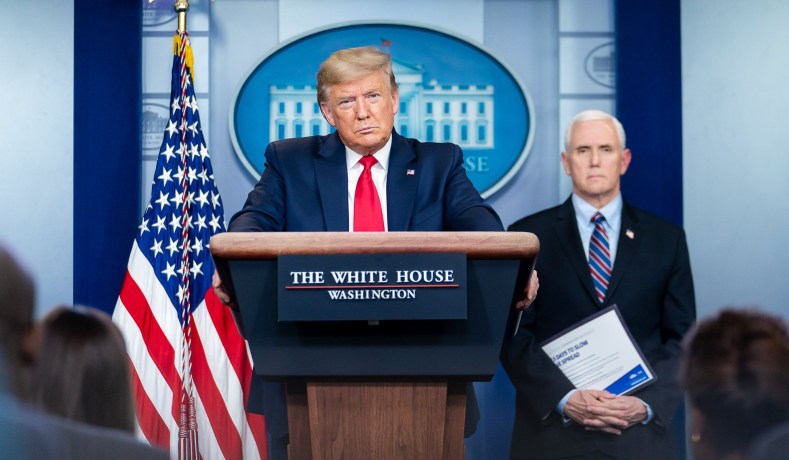 People are burning down mobile phone masts in the UK, concerned that 5G technology is spreading the COVID-19 epidemic. This is a crackpot theory, but it does seem to fill people's psychological need to criticize others and cast blame.

And this theory only slightly crazier than President Donald Trump's efforts to blame everyone but himself for the U.S. response to the coronavirus epidemic.

In recent days, Trump has come under fire after it was revealed a close adviser gave an early warning about the magnitude of the coronavirus risk. Trade adviser Peter Navarro wrote a letter on January 29 warning the coronavirus risked "evolving into a full-blown pandemic, imperiling the lives of millions of Americans."

Perhaps to distract the public from this issue, Trump responded by blaming the World Health Organization (WHO) for its response to the epidemic. "They called it wrong. They call it wrong. They really, they missed the call," he said at a media conference on April 7. Trump also denied seeing Navarro's letter.

Trump's repeatedly criticized the WHO for not recommending closing international borders to stop the spread of the epidemic. "We're going to put a hold on money spent to the WHO." As if Trump were improvising, he walked the threat back moments later, saying he was simply considering it.

The WHO first tweeted about the Wuhan coronavirus cluster on January 4. On January 10 it released a document intended to help countries identify gaps to prepare for an outbreak. The very first item was: "Which coronaviruses (CoV) diagnostic tests is the country capable of conducting?"

On January 30, the WHO declared a Public Health Emergency of International Concern. Rather than closing borders, the WHO recommended "strong measures to detect disease early, isolate and treat cases, trace contacts, and promote social distancing measures commensurate with the risk."

The U.S. did not do this, but instead put in place a partial travel ban from China that went into effect on February 2. As late as February 26, Trump was claiming the number of cases in the U.S. would drop to zero. Despite the WHO's advice, widespread testing was still not available, allowing the virus to silently spread.

Trump finally declared a national emergency on March 13. Ever since, he has been falsely and without evidence suggesting the end of the virus threat is just around the corner. The president's proxies have fanned out on television to blame the UN agency.

One of them was Republican Senator Rick Scott of Florida, who said if WHO "had done their job, everybody would have gotten more ready."

Judging by the actions of Scott's fellow Republican, Florida Governor Ron DeSantis, nothing anybody said would have encouraged a proper response. DeSantis waited until the number of confirmed coronavirus cases nearly hit 7,000 people on April 1 to issue a stay-at-home order for the state.

Defending his actions, DeSantis said he was taking his cues from the White House. Trump at the time called him "a great governor who knows exactly what he's doing." In the week since DeSantis gave the order, an additional 7,000 people have been infected and 200 have died. Florida's beaches remain open, and his order made an exception for "religious services conducted in churches, synagogues and houses of worship" and "recreational activities."

The WHO is only Trump's most recent scapegoat for his lackadaisical and at times mendacious response to the epidemic. Earlier targets include the former Barack Obama administration, which had set up a unit to handle a global pandemic in the National Security Council which the Trump administration dismantled. Trump also got rid of a U.S. epidemiologist embedded in China's Centers for Disease Control last summer amid trade war tensions.

Trump has also started blaming China for the outbreak, despite his initial public praise for Beijing's response in January and February. The president has also blamed his own country's governors for not being adequately prepared, remarking the federal government is "not a shipping clerk" for life-saving supplies.

His administration went so far as to change the text of the Department of Health and Human Services website, downgrading the role of the Strategic National Stockpile from "the nation's largest supply of life-saving pharmaceuticals and medical supplies for use in a public health emergency" to "[supplementing] state and local supplies during public health emergencies."

Throughout this crisis, Trump has undercut his own officials. Most recently, Trump told reporters that he would not wear a face mask despite a recommendation to the public do so from the Centers for Disease Control and Prevention.

This is reminiscent of his friend, UK Prime Minister Boris Johnson. Just over a month ago, Johnson bragged during a media conference that during a visit to a hospital where coronavirus patients are being treated, "I shook hands with everybody, you'll be pleased to know, and I continue to shake hands with everybody." As of April 9, Johnson was spending his third day in an intensive care unit, fighting COVID-19.

Former U.S. President Harry S. Truman is perhaps best remembered for keeping a sign stating "The buck stops here" on his desk in the Oval Office. President Trump will most likely be remembered for his words, "I don't take responsibility at all."