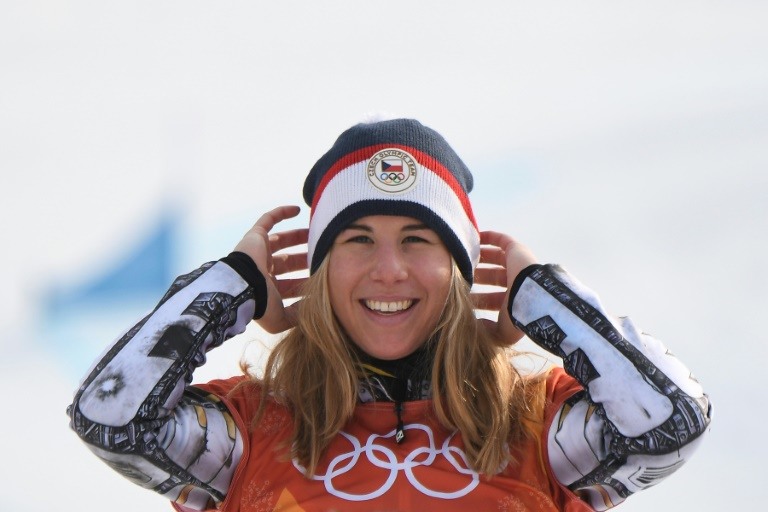 Ester Ledecka completed a historic Olympic double on Saturday when the Czech star romped to snowboarding parallel giant slalom gold to add to her shock super-G title in alpine skiing.

The 22-year-old world champion became the first woman to capture gold medals in different sports at the same Winter Games after beating Germany's Selina Joerg by almost half-a-second in the Pyeongchang final.

"It was quite tough to change myself back into a snowboarder today," said Ledecka, already the first athlete to compete in snowboard and alpine skiing at a Winter Olympics.

"But suddenly the snowboarder girl showed up and I was just riding with confidence and enjoying the race."

"Today was a big day for snowboard Ester! I'm still confused but terribly happy at the same time," she added.

"It was something very special -- I'll think about this moment until the end of my life."

One week ago, Ledecka stunned a strong field including defending champion Anna Veith and American Lindsey Vonn to win the super-G, becoming one of the stories of the Games.

Ledecka now joins Norwegians Thorleif Haug and Johan Groettumsbraten as the only athletes to do a multi-sport double in the same Olympics.

Haug did the cross-country and Nordic combined double at the 1924 Olympics and Groettumsbraten won the same events at the 1928 Games.

Ledecka never looked seriously threatened in a giant parallel slalom competition she was expected to dominate, beginning the day by overpowering 2014 gold medallist Patrizia Kummer to avenge her loss to the Swiss in the Sochi quarter-finals.

The Czech, dubbed a "miracle on snow" by her national media, dealt equally ruthlessly with Austrian Daniela Ulbing, who had narrowly avoided running over a squirrel in winning her first race.

Ramona Hofmeister was no match in the semi-final, wiping out as she tried in vain to catch Ledecka. The German finished with the bronze.

"In the skiing I really didn't believe what happened," said Ledecka, when asked which gold medal tasted sweeter.

"My plan is to stay with my heart, so for now I think I'll continue to do both because I love both," she added. "I'm in my skin and doing what I love."

Ledecka started skiing aged two and first strapped on a snowboard at five, going on to compete at world championships in both disciplines, although she had never medalled on skiis before the Pyeongchang Games.

Joerg paid rich tribute to Ledecka, who had been in a class of her own throughout.

"She's incredible! I've heard of people competing in summer and winter Olympics, but never in two sports in one Olympics," said the silver medallist.

"It's more than a full-time job. I think she shows what is possible in sports, she's an amazing athlete and she deserves it. She's the girl for the future and the world is looking to Ester now."

Hofmeister added: "I knew everything had to work perfectly for me to day and it (did). It still hasn't sunk in yet. It feels like a gold medal."