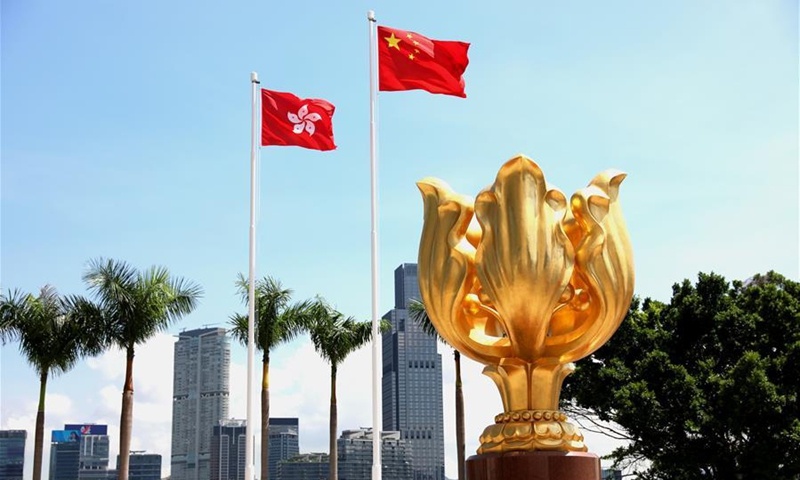 The White House on Aug. 5 local time issued a so-called memorandum directing the deferral of removal of certain Hong Kong residents who are present in the US for 18 months.

Some US politicians, when posting the message on social media, once again resorted to the "stand with Hong Kong people" rhetoric, despite the slandering and hypocritical nature of the so-called memorandum. Such insincerity once again exposed the US' intention of political manipulation.

The slandering and hypocritical nature of the so-called memorandum shows certain US politicians' negligence of justice and fairness. Claiming to offer a safe haven for those who are afraid of returning to Hong Kong, the White House has just turned a blind eye to the facts and the mainstream willingness of the Hong Kong residents and fabricated lies to slander the national security law for Hong Kong. It wishes to undermine Hong Kong's stability and prosperity, and contain China's development with the help from anti-China rioters.

Such blatant interference in China's domestic affairs and violation of international law and the norms governing international relations will always be opposed by the 1.4 billion Chinese people, including Hong Kong compatriots.

Facts have proven that nothing about the so-called "stand with Hong Kong people" rhetoric is real, and let's just have a look at what the anti-China rioters supported by the White House had done and how much damage they had caused for Hong Kong.

The "Hong Kong independence" forces, black-clad protesters, and the "burn with us" tactic backed by the US caused huge suffering for Hong Kong residents. During that time, constant violent activities left more than 3,000 people injured. The number of bricks that mobs peeled off could fill 48 basketball courts. And if we put all the railings these rioters stripped down together, it would be 124 times taller than the International Finance Centre Tower 2, Hong Kong's landmark skyscraper. In 2019, Hong Kong's economy reported first negative growth in the recent decade, and about half of the service sector experienced a drastic drop in revenue. The revenue of the accommodation and retailing industries plunged 14.3 percent and 11.1 percent, respectively. With a huge decline in the number of visitors, there was a high unemployment rate in the retailing, accommodation and catering industries. Such data and facts, as a result of the so-called American "rights and freedoms," were exactly what Washington wants to see.

With an evil intention to trouble Hong Kong, the US doesn't care about the rights or freedoms of Hong Kong residents at all. What the US aims at is the "freedom" of some anti-China rioters to disturb orders in Hong Kong and undermine China's national security. The White House is not standing with Hong Kong people. On the contrary, it is hurting their interests.

No one cares about Hong Kong's development, stability and prosperity more than the Chinese central government. Since the national security law in Hong Kong was enacted a year ago, Hong Kong law enforcement agencies have arrested some key figures for disrupting Hong Kong and China as a whole, and the number of crimes in Hong Kong has dropped significantly. Hong Kong's economy and finance have continued to be strong, and the confidence of Hong Kong society in the "one country, two systems" principle has increased. The international community is still optimistic about the future of Hong Kong. Hong Kong residents deeply understand that only with guaranteed security can Hong Kong embrace a better future and more prosperous development.

Hong Kong residents want stability and security, something that no form of right or freedom should offend. Some US politicians have overestimated their strength by going against the will of the Hong Kong people and supporting the anti-China rioters who don't want to see a more prosperous Hong Kong,

The national security law for Hong Kong is a guardian for the special administrative region that brings valuable stability to the people there. With strong patriotism and a firm determination, Hong Kong will make solid steps to regain its glory that no country or individual is able to block.