OPINIONS 'Tribunal' on Xinjiang is new farce in the making

'Tribunal' on Xinjiang is new farce in the making 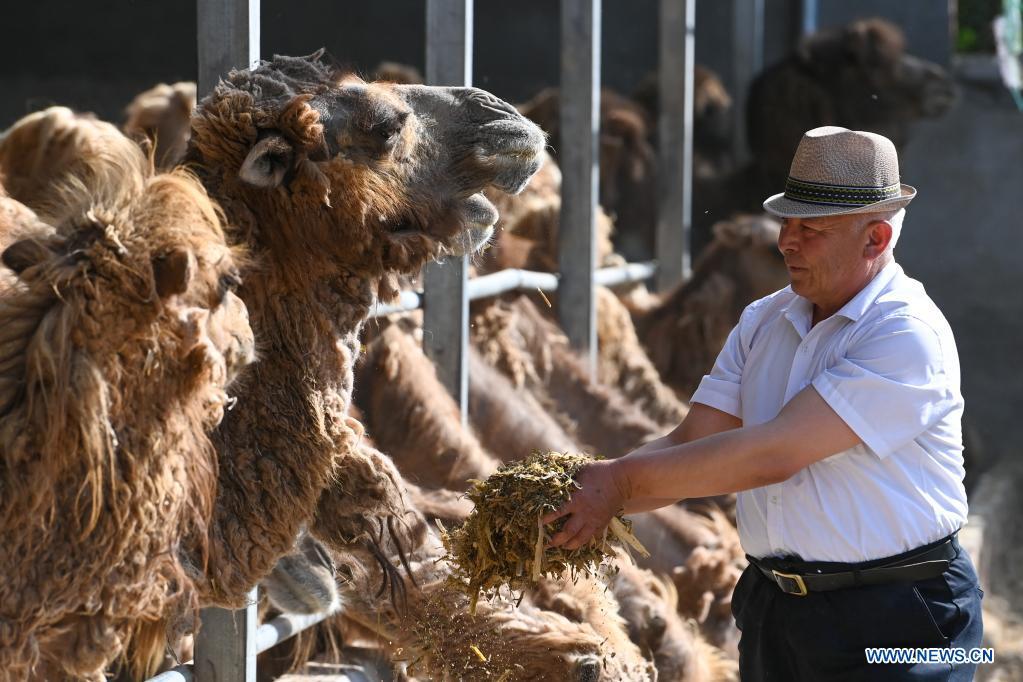 A man feeds camels at an organic cultivation base of a dairy company in Yining county in Kazak autonomous prefecture of Ili, Northwest China's Xinjiang Uygur Autonomous Region, May 27, 2021. (Photo: Xinhua)

Several hearings were held In London from June 4 to 7 by a self-appointed tribunal into alleged genocide and human rights abuses in China's Xinjiang Uygur Autonomous Region. The tribunal plans to reconvene for further hearings between Sept 10 and 13 and issue its conclusions by year's end.

The tribunal is chaired by Geoffrey Nice, a British barrister, with Nick Vetch, a businessman, as his vice-chairman. It has also recruited Helena Kennedy, a human rights lawyer, to be its "external adviser".

Nice and Vetch have previously worked closely together, and also in relation to China. In 2019, they both sat on the so-called China Tribunal, also chaired by Nice, and to which China strongly objected. Then, as now, the tribunal was devoid of official status, although this did not prevent it from producing a damning report that accused China of forced organ harvesting from prisoners of conscience. China's London embassy denied the allegations.

Once again, aping international nomenclature, those inquiring into the Xinjiang situation have grandly styled themselves the "Uyghur Tribunal". Although Nice says the tribunal plans to "review evidence "and then "reach a judgment", it has no legal standing and no enforcement powers. He says, nonetheless, that "what we hope to achieve is to provide facts that others may use".

China denies that abuses have taken place. It says that, faced with a proliferation of terrorist atrocities by separatists that caused numerous deaths and destabilized the region, it was necessary to initiate a deradicalization program. The purpose of this was to reeducate people at risk of indoctrination, to provide them with rehabilitative training, and to reduce poverty.

Foreign Ministry spokesman Wang Wenbin has said the tribunal is "neither legal nor credible".

Whereas Nice says that the tribunal will seek "to reach an impartial and considered judgment on whether international crimes are proved to have been committed by the PRC", Vetch says it is "an independent endeavor and it will deal with the evidence and only the evidence". As they both presumably realize, their report, to have any credibility, must at least give the appearance of objectivity. Yet this is precisely where their problems lie.

To objective observers, the close involvement of Nice and Vetch with the "China Tribunal" in 2019 is indicative of an anti-China mindset. As China sees it, there is a sustained campaign in the West to misrepresent the situation in Xinjiang, the purpose of which is to harm its international standing.

Nice and Kennedy were among the nine individuals and four organizations sanctioned by China on March 26 for having "maliciously spread lies and disinformation "about the "so-called human rights issues in Xinjiang". The impression, therefore, that they have a grudge against the country they are investigating is inescapable, although this is by no means all.

On June 4, Benedict Rogers, who runs Hong Kong Watch, the propaganda outfit that specializes in churning out fallacies about China, claimed that it was he who had introduced Nice to the Uygurs some two-and-a-half years earlier. He has, moreover, clearly taken a shine to Nice, as he recently appointed him as a Hong Kong Watch patron. Another of its patrons is David Alton, whose name will forever be linked with the now infamous report on the Hong Kong Police Force that the All-Parliamentary Group on Hong Kong, of which he is a vice-chair, produced in 2020.

The All-Parliamentary Group, which was established in November 2019 and has no official standing, announced it would hold an inquiry into the police force's handling of medical workers during the Hong Kong protests. Once the inquiry was established, however, researchers discovered that the group was being covertly funded by Stand with Hong Kong, an anti-police body with close ties to both the protest movement and Hong Kong Watch.

Indeed, the group's report, which maligned a brave and professional body of men and women, was by any yardstick a travesty of justice. That unsavory episode leads inexorably to the question of who is funding Nice's inquiry, and at this point foreign money again rears its ugly head.

According to the tribunal's website, it was in June 2020 that Dolkun Isa, head of the "World Uyghur Congress", "formally requested that (Nice) establish an independent people's tribunal to investigate 'ongoing atrocities and possible genocide' against the Uyghurs, Kazakhs, and other Turkic Muslim populations".

In other words, the US has a direct interest in the outcome of Nice's inquiry into the Uygurs.

The tribunal has also revealed that it was launched with assistance from the Coalition for Genocide Response, which was founded by Hong Kong Watch functionary Luke Pulford, who also has close links to Stand with Hong Kong. Hong Kong Watch, despite its name, is now operating on various fronts increasingly unrelated to Hong Kong, but all of which have China animosity at their core.

Although the tribunal proclaims that its proceedings are conducted "in accordance with international law and international legal norms", anybody watching its proceedings would have been startled at its cavalier approach to evidentiary issues. Questioners, for example, repeatedly put the answers they wanted to hear into the mouths of witnesses, and the rule that inhibits the use of hearsay evidence was routinely flouted.

The "Uyghur Tribunal" claims that it is run by an independent civil society body dedicated to impartiality, objectivity and a fair outcome. If this is true, it begs the question of why so many organizations hostile to China are so heavily involved behind the scenes.

All the signs point to the tribunal simply dancing to the tune of others, in which case its report will not be worth the paper it is written on.

The author is a senior counsel, law professor and criminal justice analyst, and was previously director of public prosecutions for the Hong Kong Special Administrative Region.