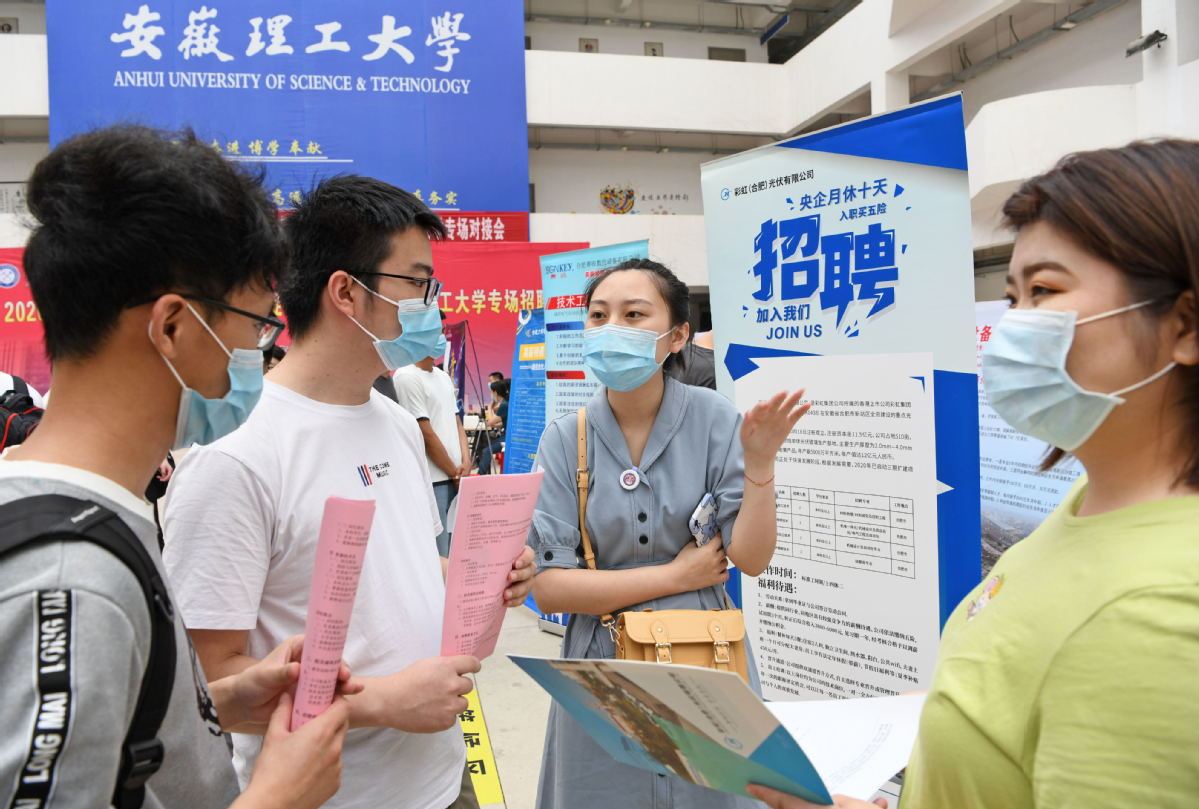 Job seekers stop by a company booth at a career fair at Anhui University of Science and Technology in Huainan, Anhui province, on June 16, 2020. (Photo: China Daily)

Although college graduates may have reason to feel concerned because it is quite challenging to find a good job with handsome pay that will allow them to best display their potential. "An unemployment wave" is not a proper phrase to describe China's job market. For almost a decade, China's supply of workers has been in balance with its needs, and anyone who carries out any field surveys will find that one sector after another complains about a shortage of hands.

But there is now a structural mismatch, which, in plain words, means that the labor skills of labor force do not match the needs of employers.

That has much to do with the majors in colleges, some of which are outdated or impractical and need to be reformed. Various colleges and universities have been doing this and revising their lists of majors so as to help graduates find jobs.

Society is moving so fast that many old industries are disappearing and their workers going to new, emerging ones, particularly in the rapidly expanding service sector. A typical example is that overcapacity in some old, high-polluting industries such as the steel industry in several provinces and cities forces workers to find new jobs.

And we should not ignore that the COVID-19 epidemic has been a sudden shock to the economy, its effects being felt particularly in February and April, and the hospitality and offline retail industries are still recovering. That's why people are especially worried about finding jobs.

The government has been doing what it can to address the issues. First, it has cut tax and other fees so as to inject more vitality into the economy and help the small and medium-sized and micro enterprises that provide about 90 percent of jobs.

Second, it has been promoting consumption, so that money can be circulated and more opportunities created. When more people travel, for instance, there is a greater demand for taxi drivers, restaurants and hotels.

In the second half of the year, the national GDP growth rate had already come back to 3.2 percent, and the surveyed unemployment rate, which best reflects the job market, had fallen to below 6 percent.

We are confident that the economy will continue its recovery momentum and the unemployment situation will improve in the third quarter.