OPINIONS “Who are we?” – Brexit talks, one year on 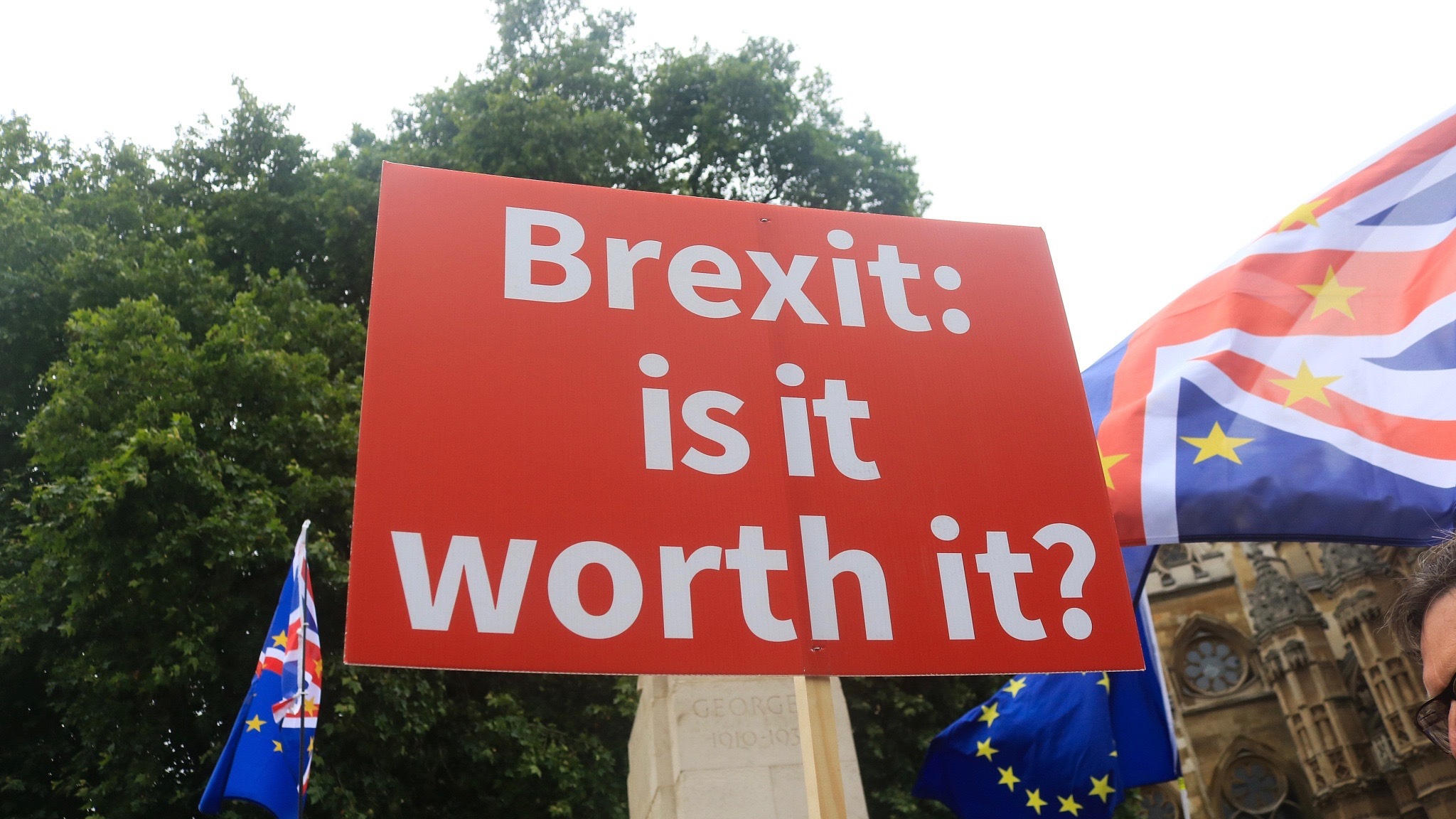 Pro-EU Remain and Stop Brexit protesters outside Parliament as Members of Parliament are set to start voting on amendments to the EU Withdrawal Bill put forward by the House of Lords, June 12, 2018, in London, England. (Photo: VCG)

"Great Britain has lost an empire and has not yet found a role," former US Secretary of State Dean Gooderham Acheson said in a speech at West Point in 1962.

The rhetoric still has relevance for the UK today, a country which is keener than ever to reorient itself in the world after being mired in the Brexit dilemma.

Since the Brexit negotiations commenced on June 19, 2017, political tensions have given rise to economic uncertainty. Paris has eclipsed London as the most attractive European destination for foreign direct investment. The sentiment within the UK is dismal, as each household has seen its annual income shrink by 900 pounds.

Security concerns have also emerged. For instance, the UK and the European Union (EU) have been at odds over whether the former can continue using the Galileo satellite system.

In a March poll by YouGov.com, 45 percent of the UK citizens thought it a wrong decision to leave the EU, slightly higher than that of the previous year. And more voters for Leave in the controversial referendum two years ago have grown grouchy with Brexit, leading to “Bregret,” a mish-mash of "Brexit" and "regret."

Currently, the biggest controversy is whether Brexit will be a hard one or a soft one, namely, whether the UK should leave the EU Customs Union. If it does leave, the value of the pound sterling will further tumble and the market will become increasingly depressed. If not, what’s the significance of Brexit?

Glory gone with the wind

Leave voters, a majority of who are senior citizens were living in a time-space dislocation. They have long sought to restore the former glory of the British Empire, which has been in free fall after World War II. In their minds, the UK will, as always, be capable of maintaining the equilibrium across Europe given its glorious history.

The victory in the WWII cost the country prohibitively, partly presaging the end of an empire. To turn around the declining tendency, former UK prime minister Winston Churchill envisaged in 1948 a "three-ring diplomacy," the first ring being the Commonwealth, the second the English-speaking world and the third a united Europe, according to Wang Yiwei, director of the Institute of International Affairs and also the Center for European Studies under Renmin University of China.

But the leader who salvaged the UK from the brink of annihilation failed to keep the empire together. British dominions and colonies, which were originally scattered, pursued their own national rejuvenation. The UK and the US became estranged day by day.

In a utilitarian move, the UK joined the EU in 1973. It was by virtue of the third ring – the wider Europe – that the UK has managed to top the world's financial market and perch near the top of the liberal world order. But given the massive developments of globalization, the UK still failed to recover its former glory.

For a long time, the proud British clung to a disdain of the European continent. This complex has prompted them to believe that the EU has become a stumbling block that has prevented them from prospering. “Hence they brooked no delay to take off the ‘coat’ and embrace a world of neoliberal globalization,” Wang Yiwei, also a Jean Monnet Chair Professor, told CGTN.

With the slogan of a "Global Britain," the UK embarked on the road to Brexit, actually the second of its kind. Back in June 6, 1975, two years after the UK joined the EU, the British people held a referendum to vote on whether to withdraw from the regional organization. History repeated itself 41 years later.

For decades, the British people have been living in a mirage of returning to the good old days when the sun never set on their super-kingdom.

American political scientist Samuel Huntington was not off the mark when he theorized that different cultures will "re-indigenize" as they come into greater contact with each other. When the economic growth of developed countries falters amid an increasingly global society or there is such a perception among their people, they tend to shun global society and coalesce along civilizational lines.

Such “re-indigenizing” plants the seeds of populism. Brexit and the Americanism trumpeted by US President Donald Trump, alike exemplify the trend away from globalization to embrace inward-looking diplomacy.

“Back in the 1980s, former UK Prime Minister Margaret Thatcher and former US President Ronald Reagan reiterated the concept of neoliberal globalization, which later developed into the Washington Consensus,” Wang Yiwei noted.

According to him, excessive financial liberalization led to industrial hollowing-out and consequently larger wealth gaps and higher unemployment rates. These unaddressed grievances of the people further contributed to the rise of populism.

Robert D. Kaplan, a US politics journalist, said in his “The Return of Marco Polo’s World” that fragmentation is reshaping the world as the West itself is dissipating.

Now some call for another referendum, but doesn’t going back on the previous outcome contravene the credibility of the UK government, and deal a blow to its legitimacy as a political authority? Such flip-flopping would diminish the notion of the “social contract” by which the people have willingly put their trust in the government – a notion most cherished by the West. If the UK goes for a revote, wouldn’t democracy be a joke?