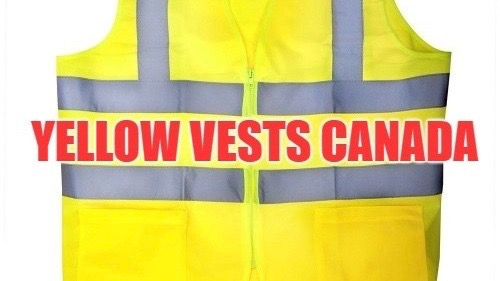 While Paris has yet to recover from the most grievous riot in half a century, the "yellow vest" protests have inched their way across the Atlantic Ocean. Over the past weekend, a variety of cities in Canada including Ottawa, Calgary and Vancouver were snared into the same flames among gatherings of people in fluorescent vests to rally against the Justin Trudeau administration's liberal policies on immigration and climate governance. Protesters say they will again take to the streets this Saturday.

Why are they protesting?

A group of some 750,000 Canadians claim on a Facebook page that they are objecting to "the CARBON TAX and the Treason of our country's politicians who have the audacity to sell OUR country's sovereignty over to the Globalist UN and their Tyrannical policies."

They don't believe a carbon tax hike at the cost of their livelihood can relieve climate change, neither do they agree that the anti-oil pipeline bill will foster a clean environment.

In Alberta, which prospered due to the crude oil boom of Fort McMurray, protesters opposed Bill C-69 promulgated by the Canadian government to prolong reviews into massive energy projects. The bill postponed the pipeline construction, further exacerbating the plight low oil prices that have inflicted the local economy over the past few years.

Moreover, they are decrying Trudeau's generous immigration agenda for allegedly bringing destruction to Canada as a nation. The federal government recently signed a UN migration agreement, also known as the United Nations Global Compact on Safe, Orderly and Regular Migration. The non-legally binding protocol outlines 23 objectives for safe, orderly, efficient and humane migration, from refugees and migrants to skilled workers.

"Canadian borders are down;" "Anybody from criminals, terrorists, killers really and former ISIS members (can come in)," the protesters asserted, adding that they pay taxes to those who don't belong to the country, putting their own job security in jeopardy.

Andrew Scheer, leader of the Conservative Party of Canada, said the accord threatened to "surrender Canada's sovereignty" and "undermine free speech." But migrant supporters denounced the remarks as groundless. Trudeau called it irresponsible to drum up fear over immigration.

Resurgence of populism in the West

The "yellow vest" protests, primarily to oppose a rise in fuel prices, have raged on for at least five weeks in France, with tear gas floating over the Champs-Elysees. The amorphous violence spilled to neighboring Belgium and the Netherlands, where people vented their anger over high living costs and immigration.

The revolt pushed Belgian Prime Minister Charles Michel to announce his resignation on Tuesday, amid the condemnation of right-wing allies claiming that joining the UN migration pact threatens Belgium's sovereignty.

Nonetheless, it's still surprising that the movement, despite in a much smaller scale, has reeled Canada, a sparsely populated country with a reputation for being mild-tempered. Its embrace of immigrants dates back to the mid-1800s when the country adopted a law on immigration, which, however, was racist in accepting only whites.

A turnaround in its migration policy did not occur until the 1961 Immigration Act removed the racial discrimination criteria in the admission process, followed by the introduction of a points system a few years later. The liberal, humanitarian immigration measures helped shape Canada into a multiethnic and multicultural nation.

Since Trudeau assumed office in 2015, he has further oriented Canada as a beacon for freedom. After announcing that Canada would accept 25,000 Syrian refugees, the prime minister greeted them at the airport, handed them winter coats, and called them "new Canadians." Back then, there were few voices of dissent. But now, things are changing.

People tend to believe in the negative rhetoric surrounding immigrants: stealing their jobs, lowering their living standards, and committing crimes. Meanwhile, they have largely overlooked the economic benefits and cultural diversity that immigration brings.

According to a report from Canada's CBC News, Victor Teece – a "yellow vester" in Regina – said the UN migration pact is "destructive to Canada as a nation," adding that Canada's identity is centered around "European, Judeo-Christian values."

The past years have witnessed a surge of populism and a rise of right or far right parties, from "Occupy Wall Street" in the U.S. to Brexit to the inauguration of Italy's populist government to Donald Trump's doctrine of withdrawal. It seems that the Western world has become lost in an identity and globalization labyrinth.

Samuel Huntington, author of "The Clash of Civilizations and the Remaking of World Order," theorized that different cultures will "re-indigenize" the longer they come into contact. Cultural interactions can either breed the diversity of a melting pot or reinforce the in-group identity of a perceived shared heritage.

For Westerners, this heritage largely resides in their Judeo-Christian values and in some cases, the “purity” of the Anglo-Saxon bloodline.

"The unipolarity that defined the Post Cold War is over, the West itself is dissipating, and we are back to classical geography – particularly in Europe," wrote American politics journalist Robert D. Kaplan in his “The Return of Marco Polo's World.”

However, Huntington's theory is not natural law, and the clash of cultures and values can just as easily stir advocates of multiculturalism and globalization. As the protests rage on, will there be greater consideration of those who call for a return to simpler times, or will the tolerance of differences prevail?