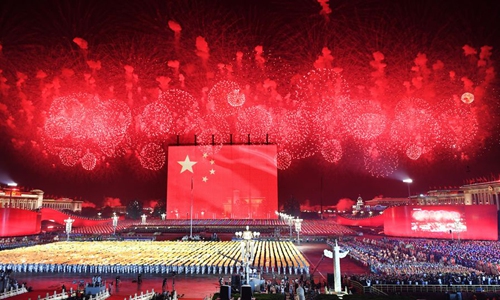 A grand evening gala is staged on Tian'anmen Square to celebrate the 70th anniversary of the founding of the People's Republic of China on October 1. (Photo: Xinhua)

The year 2019 is coming to an end. In this year, China has experienced pressure on multiple fronts. The trade war escalated to a new height. Hong Kong was engulfed by turmoil caused by the now-withdrawn extradition bill. The US and the West intensively attacked China's governance in Xinjiang. Domestically, China's economy was still under downward pressure with controversies emerging on various social issues.

Yet China's social stability has withstood the pressure test in 2019. The trade war didn't crush the will of society. China and the US reached an agreement on a phase one trade deal at the end of the year. More importantly, Chinese society has gained unity under trade war pressure.

Chinese society has generally adapted to the slowing economic growth rate despite various challenges. The improvement in economic growth quality, social fairness and environmental protection has provided support for the gradual economic slowdown. Consumption in China in 2019 has kept its upward momentum, reflecting public confidence.

In 2019, China faced the biggest strategic pressure since reform and opening-up. Profound change in China-US relations has reshaped the external strategic environment for China's development. Internally, China needs to consolidate its development achievements and mobilize to face bigger challenges.

In the past year, the US failed to crush Huawei, China's internet sector continued to advance with new star companies emerging, Daxing International Airport was put into use and the heavy-lift Long March 5 carrier rocket was successfully launched. All this progress has given Chinese people confidence.

China has shown its ample capabilities to withstand multiple pressures. No force can defeat the country. No difficulty can curb the country's development. The possible pressure on China in 2020 will hardly exceed that in 2019. Even if there will be new challenges in the Taiwan Straits, China already has enough strategic power to deal with them.

It is hoped that China can show its strategic tenacity in 2020, making the year a turning point where the country can boost its development momentum based on its accumulated strength after years of continuous structural adjustments. Today's China is more firm on its political path, more united in its system, more efficient economically after squeezing out financial bubbles and more centered on its people.

In 2020, China will build a moderately prosperous society in all respects, ensuring that the rural population living below the current extreme poverty threshold are lifted out of extreme poverty. These tasks should not be carried out under the shadow of deadlines, but should bring driving forces to the entire country's development.

Such a release of power will be accompanied with some conflicts. We need to overcome obstacles that restrict the power from being further released in 2020.

The year 2020 has not yet arrived, but the Chinese people are welcoming it with expectations that it might be better than expected.