BEIJING, Jan. 1 (Xinhua) -- Exactly 40 years ago, Beijing and Washington officially established diplomatic relations, thus ending nearly three decades of isolation, hostility and even confrontation between two big countries with a combined population of over 1 billion, and resetting the course of history and international politics. 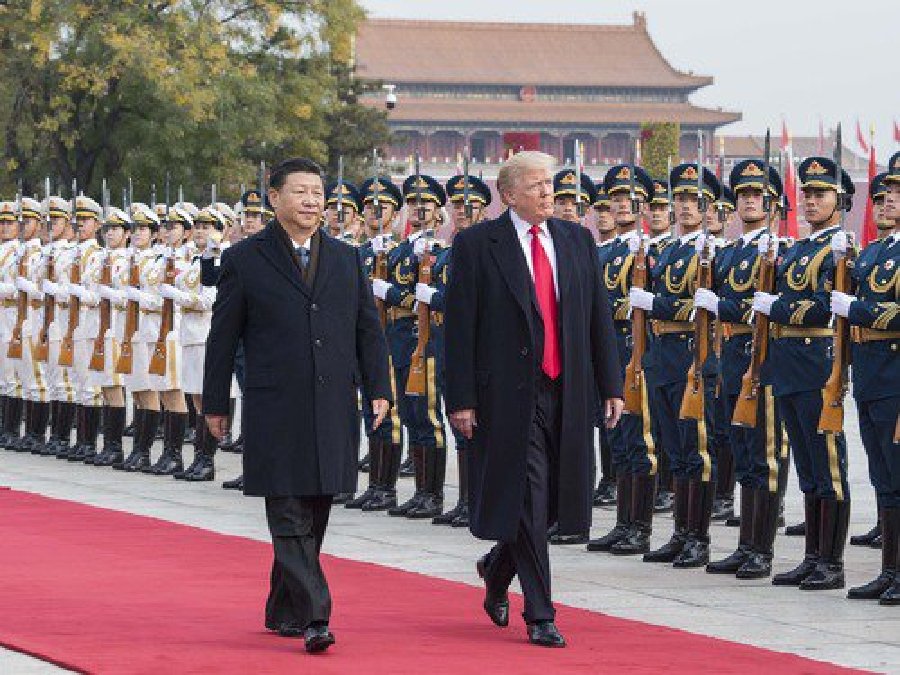 Just like the "Ping-Pong Diplomacy" that marked a thaw in China-US relations, the establishment of diplomatic ties was another wise and resolute decision made by then Chinese and American leaders with great political courage and far-reaching vision. In the past four decades, their successors have followed their footsteps, guiding the China-US relationship through all complexities and difficulties to maintain a generally steady and smooth development.

The progress of China-US ties in the past 40 years is nothing but staggering, far exceeding most people's expectations. Bilateral trade grew from a negligible $2.5 billion in the late 1970s to over $580 billion in 2017, while the stock of two-way investment rose from practically nil to more than $230 billion.

Even more amazing are the fast-paced changes in people-to-people relations. The Chinese, who once regarded having "overseas relations," especially families or friends in the United States, as a political and social taboo, are now fervently sending their children -- some 200,000 to 300,000 a year -- to study in the United States. The Americans have also seen off the so-called "Red Scare" and started to embrace Chinese kung fu, giant pandas and even the learning of the Chinese language as their understanding of the once "mysterious Communist state" deepens.

The Pacific Ocean, which used to serve as a "natural moat" blocking direct transportation between the two countries, is now overflown by more than 300 two-way direct flights each week that carry a total of over 5 million visitors each year.

The 40th anniversary of China-US diplomatic ties comes on the heels of the 40th anniversary of China's reform and opening-up. The tremendous economic success and social progress China has scored over the past 40 years result primarily from the diligence, creativity and dedication of the Chinese people, but also benefit from the support and assistance from the rest of the world, including the United States.

In return, the rapidly developing China has never stopped merging with the wider world and playing its role as a responsible member of the international community. When the global financial crisis broke out in 2008, China, upholding an all-in-the-same-boat spirit, took swift action and joined the others in a concerted effort to contain the crisis and help bring the hard-hit US and world economy back on track.

Forty years on, cooperation, which might just be one of the many options for China and the United States on Day One of their mended relationship, has turned out to be the best and only correct option. China-US collaboration has not only created immense development opportunities and brought substantial benefits for both countries and both peoples, but also helped reshape the world order, accelerate globalization and improve global governance, thus serving as a major driving force of global peace and prosperity.

Without doubt, the past four decades have not been a smooth ride for China-US relations. Even their economic and trade relations, now reputed as the "ballast stone for bilateral ties," have experienced twists and turns, from the tough "textile and apparel quota restrictions" and tedious annual reviews of the "Most Favored Nation" status, to the prolonged talks on China's entry into the World Trade Organization, as well as the ongoing economic and trade frictions. It also seems to be a topic for endless debate in the United States whether China should be seen as a "partner" or a "threat," and whether the United States should adopt a strategy of "engagement" or "containment."

As two major countries with different social systems, development paths and historical and cultural backgrounds, it is natural for China and the United States to have disagreements and encounter problems. But such disagreements and problems did not prevent the two countries from normalizing bilateral relations 40 years ago, nor should they be allowed to derail the sound development of bilateral ties today.

Both being great nations with great peoples, China and the United States need not be afraid of any fair, rational and healthy competition, but must be smart enough to avoid a zero-sum game, which harbors a high risk of dragging both nations back into a lose-lose situation of conflicts and confrontation.

At a time when the world is undergoing unprecedentedly profound changes and is fraught with risks and uncertainties, the global community expects even closer collaboration between the two largest economies, so as to help reinforce mankind's response to numerous common challenges, such as climate change, terrorism, nuclear proliferation, and transnational crimes.

Forty years on, the China-US relationship is once again at a critical point, leaving many on tenterhooks or in a state of speculation. Should the past 40 years be any guide, increasing understanding and win-win cooperation will overcome difficulties and challenges, and cooperation should and will remain at the core of bilateral ties in the long run.

It is all the more comforting and encouraging that both Xi and Trump, in their exchange of congratulatory messages upon the anniversary as well as on multiple other occasions of top-level interaction, vowed to push for more cooperation and further progress of China-US ties.

History has proved that cooperation is the best choice for both sides, Xi said in the message, while Trump said it is his priority to promote cooperative and constructive US-China relations.

From Mar-a-Lago to Beijing and Buenos Aires, meetings and direct communication between the two heads of state, featuring good personal chemistry and rapport at work, have played an irreplaceable role in navigating bilateral ties through uncharted waters. The world has high hopes for them to succeed.