OPINIONS 50 years on, Taiwan pebble did not and will not affect mighty tide of Chinese history

50 years on, Taiwan pebble did not and will not affect mighty tide of Chinese history 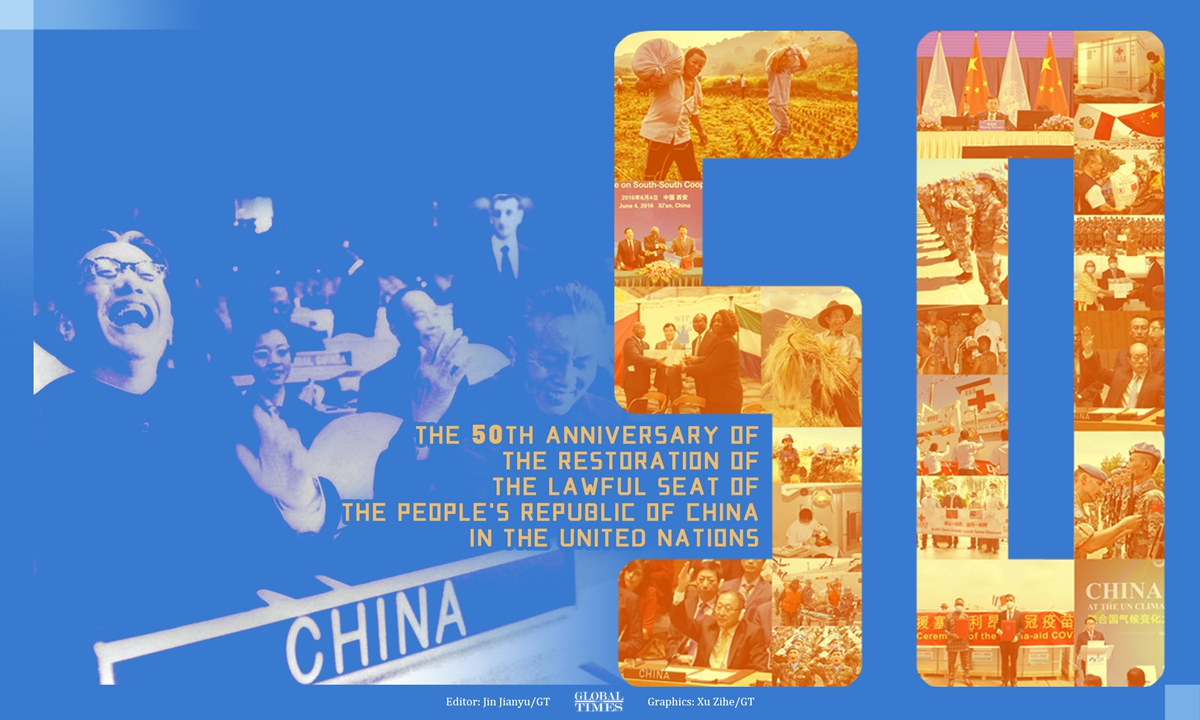 2021 marks the 50th anniversary of the restoration of the lawful seat of the People's Republic of China in the UN. These five decades have witnessed China's practice of multilateralism, full participation in and support for the cause of the UN. Graphic: Jin Jianyu and Xu Zihe/Global Times

October 25, 1971 was an unforgettable day for the Chinese people. It was the day when the UN General Assembly at its 26th session adopted Resolution 2758 with an overwhelming majority to restore all the lawful rights of the People's Republic of China (PRC). It recognized the representatives of its government as the only legitimate representative of China to the UN.

The UN was officially set up on October 24, 1945 after its Charter had been ratified by countries including China, which has since then become one of the five permanent members of the UN Security Council. After the founding of the PRC on October 1, 1949, Beijing started to send telegrams to the UN. These showed that the government of the PRC is the sole legitimate government representing the Chinese people, calling for the restoration of its lawful rights in the UN.

However, due to oppositions by countries like the US, China's seat was illegally occupied by then Taiwan authorities. Until the 1970s when the Soviet Union was taking an upper hand in its struggle with the US, relations between Beijing and Washington began to show positive signs. In 1971, with the support of vast developing countries, the Taiwan authorities were kicked out of the UN.

Accordingly, based on Resolution 2758, the representatives of Chiang Kai-shek were expelled from the place which they unlawfully occupied at the UN and in all the organizations related to it.

Resolution 2758 acknowledged the one-China principle, setting legal references for international organizations, other countries and regions when handling issues related to the Taiwan question. That is to say, there is only one China in the world. Both the mainland and Taiwan belong to one China. China's sovereignty and territorial integrity brook no division. Since then, the Taiwan authorities have not only lost their position in the UN and organizations related to it, but also had no rights to participate in international organizations whose members are sovereign states.

In recent years, secessionists in the island of Taiwan and those pro-Taiwan forces in the US have been attempting to challenge Resolution 2758. Taiwan's external affairs authority clamored that the resolution doesn't mention that Taiwan is part of China, claiming that it doesn't authorize the representatives of the PRC to represent Taiwan people.

"The People's Republic of China has misused resolution 2758 to prevent Taiwan's meaningful participation," said Rick Waters, the US State Department's deputy assistant secretary, adding "Taiwan being blocked for participation in nearly all of the UN activities creates an immense cost, not just for Taiwan, but I think to UN members as well." This is an open challenge to UN resolutions and an irresponsible statement for the peace and stability of cross-Straits relations.

Fifty years ago when China was still weak in national strength, it was able to defeat the US and the Taiwan authorities and successfully restore its lawful rights in the UN. Today, China has considerable power and influence to do this. As the world's second largest economy, China has become an important builder of world peace, largest contributor to global development, staunch defender of the international order and active provider of public goods. China is moving closer to the center of the world stage. It can more readily grasp the goal of the great rejuvenation of the Chinese nation.

It is quite certain that neither the US' plot nor the Taiwan authorities' approach will be anything more than a splash of water. Like a small pebble cast in the ocean, it may have ripples but will never succeed to change the tide of history.

Zhang Hua is an associate research fellow of the Institute of Taiwan Studies, Chinese Academy of Social Sciences. Li Jiao is a graduate student at Army Engineering University of PLA. opinion@globaltimes.com.cn