A billion yuan bet. Who won?

After waiting a year for the release of The Avengers: Endgame, countless Marvel fans finally saw the ending of the infinite war on April 24. Four days later, as Gree released its 2018 annual report, a blockbuster bet came to an end as well. 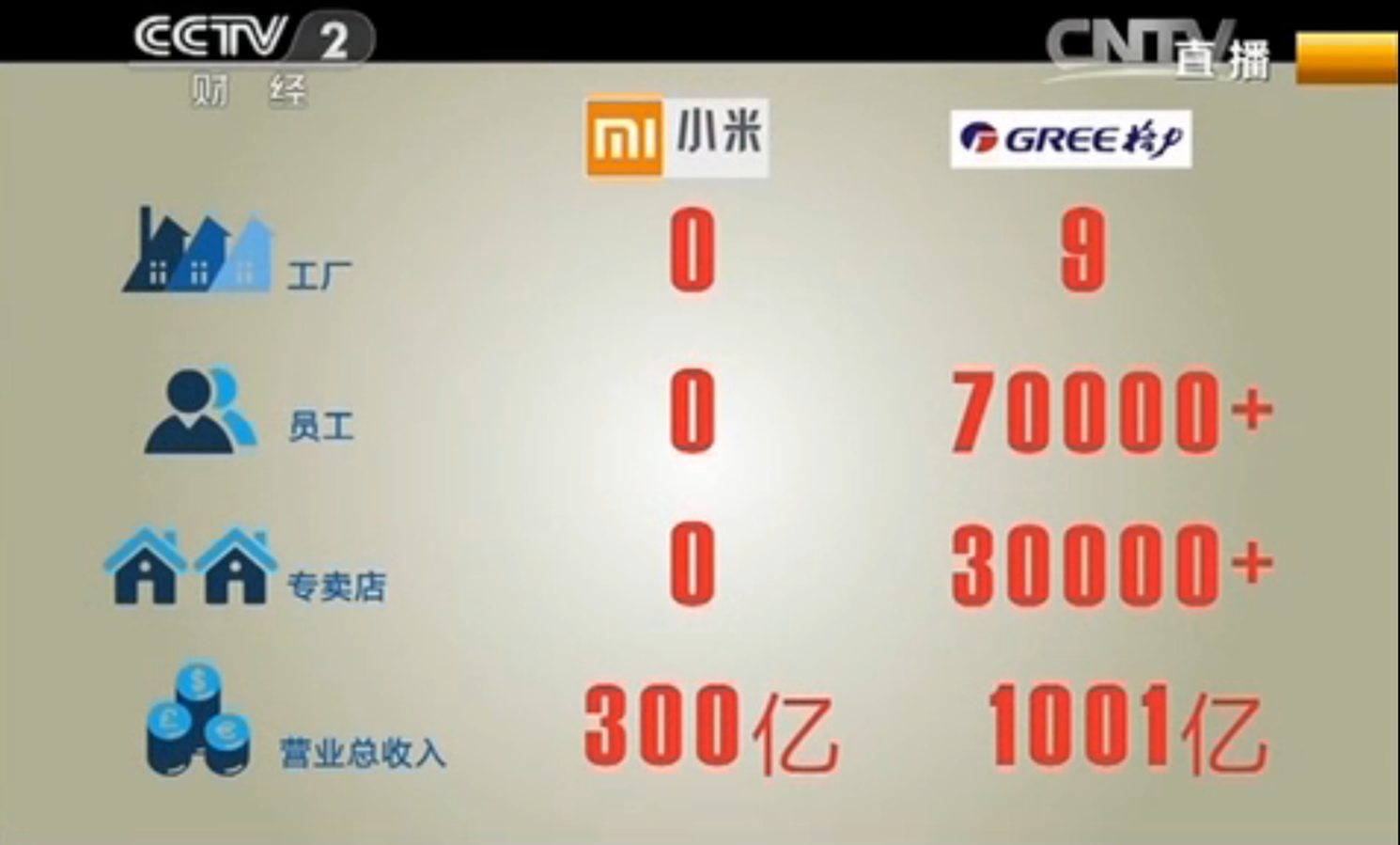 The host asked Lei whether he had the confidence that 23 years later (Gree was 23 years old in 2013), Xiaomi’s revenue could continue to grow with almost zero plants, workers or retail stores.

Lei Jun answered positively. Dong Mingzhu said Xiaomi developed very fast within the first three years, but Lei should think about whether the current model would be able to take Xiaomi further. After a few exchanges and witnessed by the whole country, Lei, a firm supporter of the internet business model, made a bet with Dong, who is a staunch believer in the real economy. 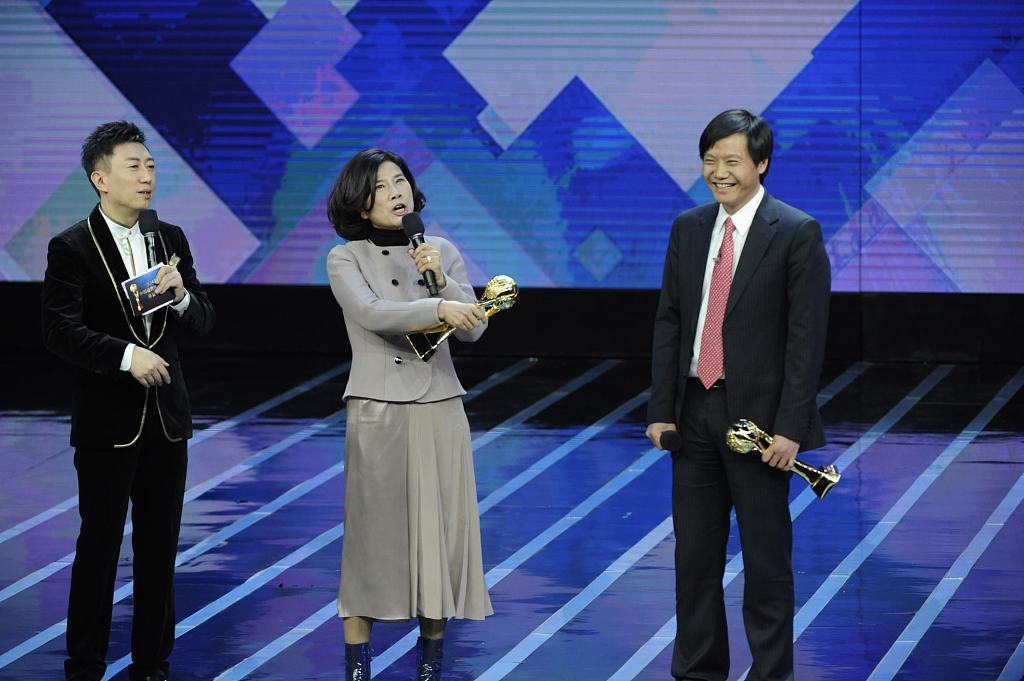 “If Xiaomi sales can exceed Gree’s within five years, Mrs. Dong will give me one yuan,” Lei said. However, Dong responded immediately by saying, “First, I won’t lose and second, one yuan is not much; I bet you one billion yuan!”

Tough battle no one foresaw

Five years later, on March 19, 2019, Xiaomi announced its third financial report. For shareholders, the performance was worthy of attention, because it was the first annual report after Xiaomi's listing. And the report also made this topic hit social media once again since it was related to the dramatic bet.

On March 20 at Xiaomi’s 2018 earnings release, Lei Jun (center) was asked about the results of his five-year, billion yuan bet with Dong Mingzhu. He laughed and said that he was still waiting for Gree’s official financial report and that Dong had not contacted him (Dong denied). (Screenshot)

Nevertheless, it is quite clear that Xiaomi only spent 5 years to increase its revenue from 30 billion to 170 billion and the revenue gap between Xiaomi and Gree is narrowing. From this point of view, even though Dong won this bet, this game was not as easy as she thought. Gree needs a new growth point if Dong wants to stay ahead.

Xiaomi, established in 2010, launched its first smartphoe in 2011 with a price tag of $300 (the average price of a smartphone in 2011 was $600). Then, “amazing products” and “honest prices” allowed Xiaomi to become a super star in a short period of time and Lei won the nickname Lei-bs (Steve Jobs’s counterpart in China). In contrast, the 28-year-old Gree is a classic appliance company with almost 90,000 workers, 14 manufacturing bases and 14 research institutes. It was the world's largest residential air-conditioner manufacturer. 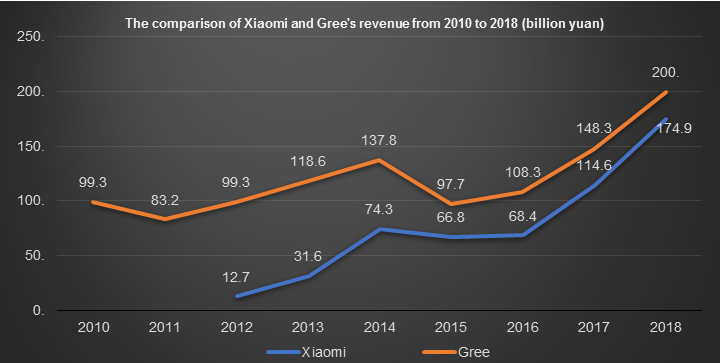 Five years ago on the CCTV stage, when Dong Mingzhu said, "One yuan is not much; I bet you a billion yuan,” she was confident because Gree’s revenue in 2013 had reached 118.6 billion yuan. Yet, Xiaomi's pre-tax sales in 2013 was only 31.6 billion yuan, a year-on-year increase of more than 150 percent. It seemed that both entrepreneurs had reason to be confident.

In the eyes of most people, this is a story of a rising internet star who surpassed a big-time player in traditional home appliances. But no one thought that Xiaomi and Gree would fall into a quagmire at almost the same time.

Because insufficient attention was paid to brick-and-mortar stores and supply chains, Xiaomi began to suffer from a siege by Huawei, OPPO and Vivo in 2015. In 2016, Xiaomi experienced its darkest hour since its establishment. Lei had to change his internet model to be more physically present. In July 2016, he said, “In the future, the focus of Xiaomi's sales channels will shift from online marketing to brick-and-mortar stores.”

Xiaomi’s stumble did not give Gree a chance to widen the gap. In the de-stocking war in the household appliance industry in 2015, Gree registered its worst financial report in the past five years: its annual revenue fell by nearly 30 percent, and fell below 100 billion yuan. Gree felt the pain of relying too heavily on air conditioners.

Even though in 2017 the two companies were back on track, their competitors were also stronger. In addition to Apple and Samsung, Xiaomi had to deal with Huawei, OPPO and Vivo, which have offline advantages. Gree's leading position in the air-conditioning market has remained solid, but its growing ceiling become visible. In 2014, Gree’s revenue reached 137.8 billion, but by 2017 it was still only 148.3 billion. Over three years it only increased by about 10 billion yuan. In the same period, the revenue of the Midea Group, its previous opponent, increased from 138.4 billion to 240.7 billion. Today, Midea's air-conditioning revenues account for only about half of its revenue, while Gree's dependence on air-conditioning is still as high as 78.6 percent.

Regardless, transformation is the only way forward.

Who wins and who loses? 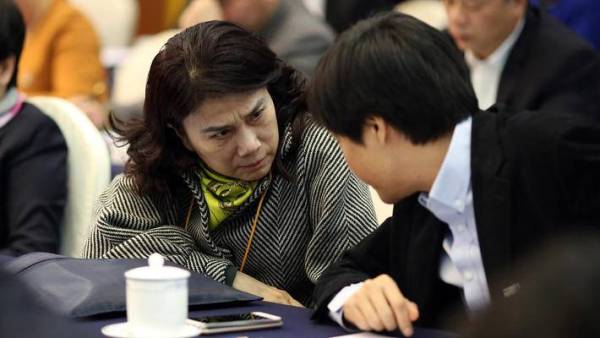 On the afternoon of March 5, 2016, Dong Mingzhu and Lei Jun spoke at the same table at the plenary meeting of the Guangdong delegation of the Fourth Session of the 12th National People's Congress. (File photo: VCG)

Lei and Dong were unaware of the risks facing them. However, Xiaomi and Gree went on completely different expansion curves.

Today’s Xiaomi focuses more on offline sales than in 2013. With the early deployment of the IoT (Internet of Things) business, Xiaomi successfully replaced its performance growth with a new engine, and IoT gradually took over some of the growth momentum from the smartphone business. In 2018, Xiaomi went public and Lei said in its prospectus, “Xiaomi is an internet company with smartphones and smart hardware connected by an IoT platform at its core.”

Meanwhile, Lei has adopted "AI+IoT" as his slogan since the second half of 2018. On November 28, at the Xiaomi AI+loT Developers Conference, he described AI+IoT as the core strategy for Xiaomi over the next 10 years. According to the latest data released by Xiaomi, the current Xiaomi IoT platform supports nearly 2,000 devices, and the number of smart device connections was 132 million. It has topped the world in consumer IoT devices. 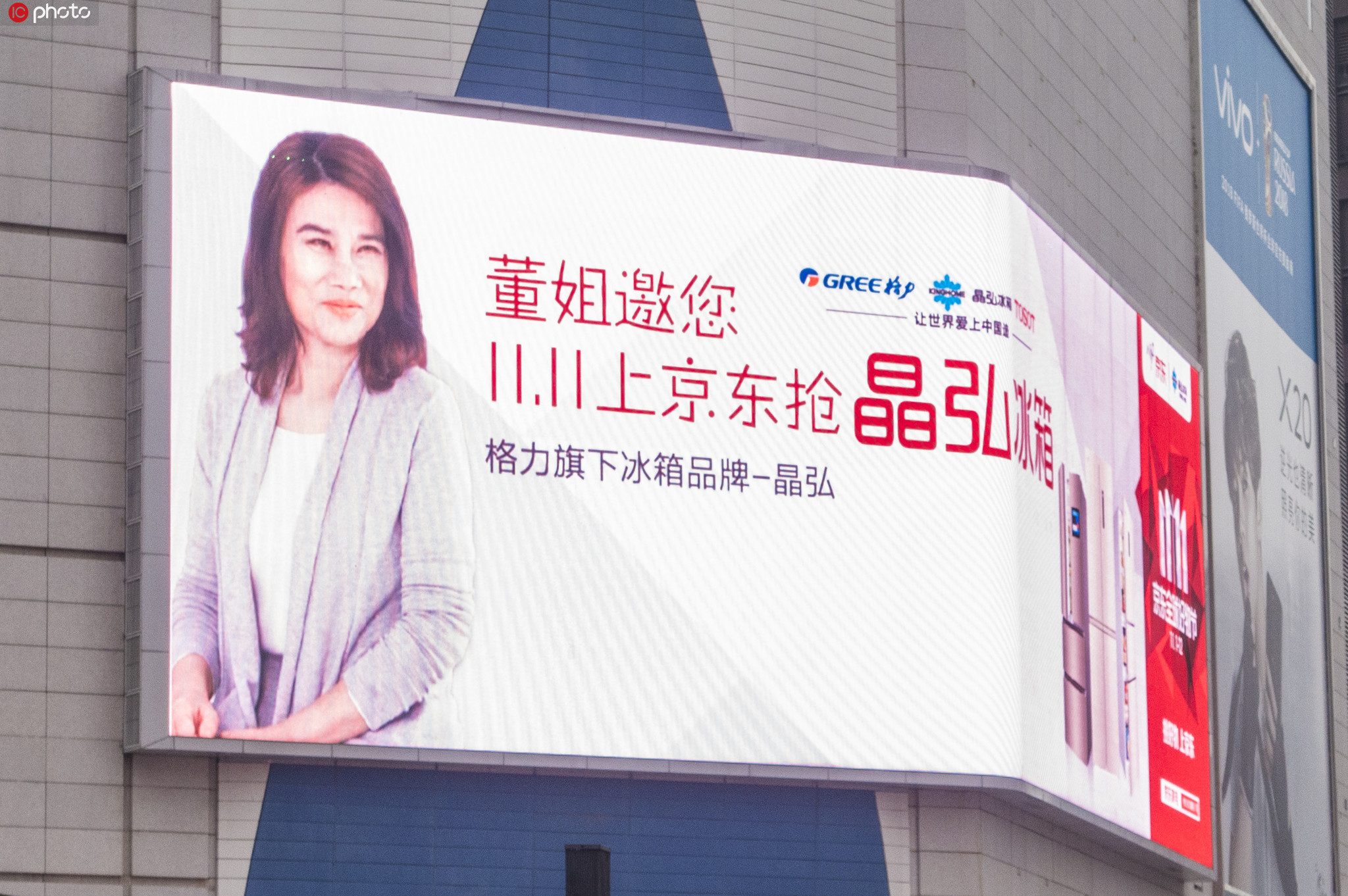 “The cost of a celebrity endorsement is over ten million yuan, and I would rather spend the money saved on production costs.” In March 2014, Dong succeeded Jackie Chan as Gree's spokesperson.  This photo shows a Gree’s outdoor advertisement for an e-commerce platform. (File photo: IC)

To deal with the single market problem, Dong put forward a diversified operational strategy and thought more about the internet. However, Gree has not found a new growth point. In its 2018 annual report, appliances other than air conditioners and smart equipment accounted for no more than 4 percent of Gree's total revenue. Smart equipment revenue declined by 64.9 percent year-on-year. From consumers sneering at Gree's smartphones to the company’s failure to acquire a new energy electric vehicles company, Dong’s ambitions were not materializing.

On March 8, Gree and Alibaba signed a memorandum of strategic cooperation, saying they will carry out comprehensive cooperation on IoT, new product innovation, enterprise digitization and other fields. Gree will also cooperate with TmallGenie (an AI assistant produced by Alibaba) to connect all products to the IoT. It plans to sell a million sets of intelligent air-conditioners in Tmall in 2019. Meanwhile, Gree's new products will be launched simultaneously in Tmall, and Gree will cooperate with Tmall to customize C2B products. 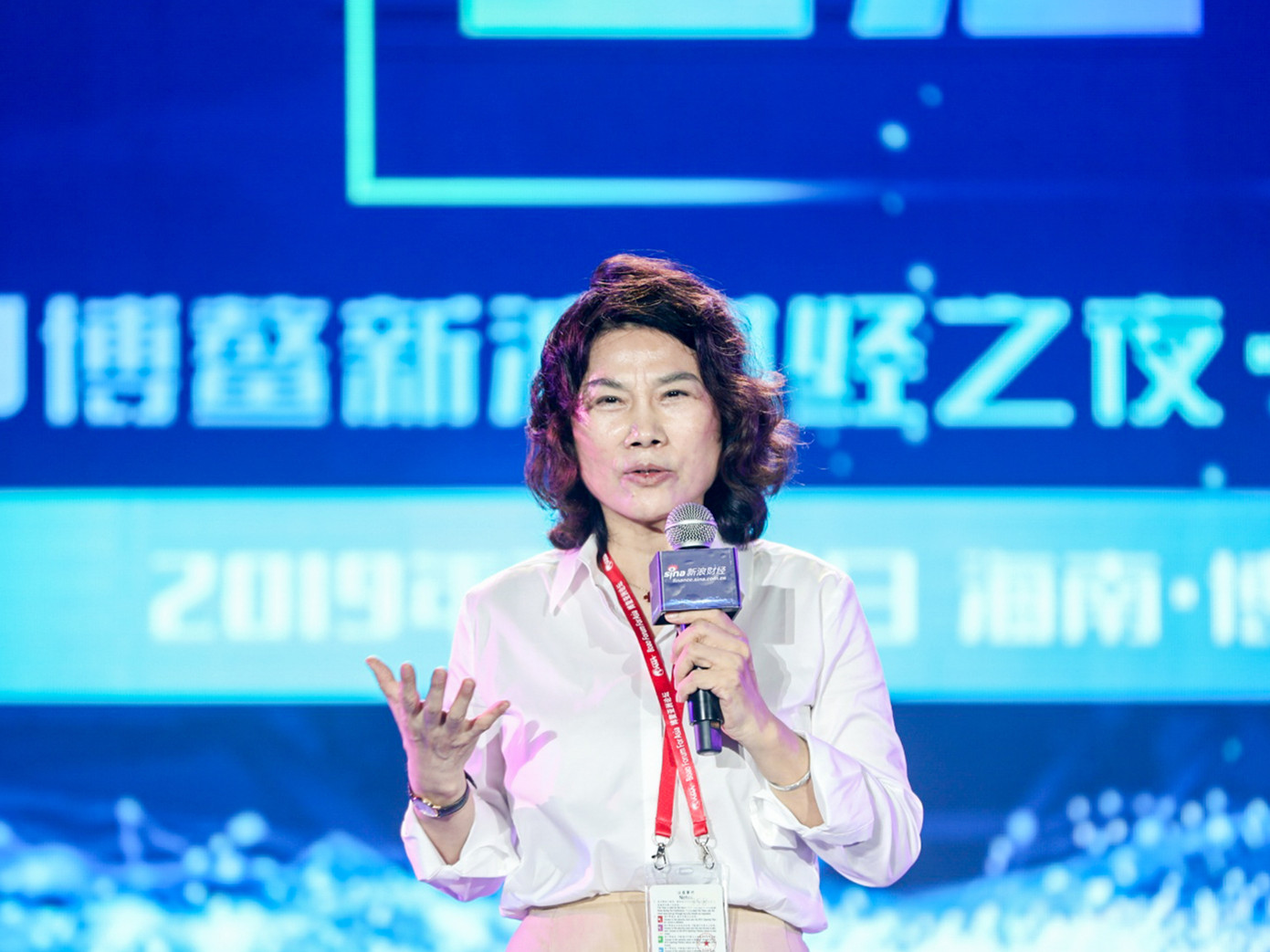 Dong Mingzhu responded to a question about the "billion yuan bet" during a sharing session in Baoao. She said, “We did not gamble for the sake of gambling but over a concept. What is the gap between the internet company and traditional manufacturing? Who can have the last laugh!” She also said “I did not ask Lei Jun for the money” the day before. (File photo: Sina.com.cn)

It seems Lei Jun lost the bet but Xiaomi’s future is a little bit clearer than Gree's. However, from the perspective of net profit, Xiaomi still has a long way to go. Compared to Gree, which had a profit of 26.2 billion yuan, Xiaomi’s was only 8.6 billion yuan. Xiaomi's shares remain below its IPO price. On the contrary, Gree shares hit new highs several times this year.

The Avengers can have an “endgame”. But for entrepreneurs, the game is never over once it begins. Regardless of whether they will make another bet in the next five years, people will still watch them and wait for a new answer.