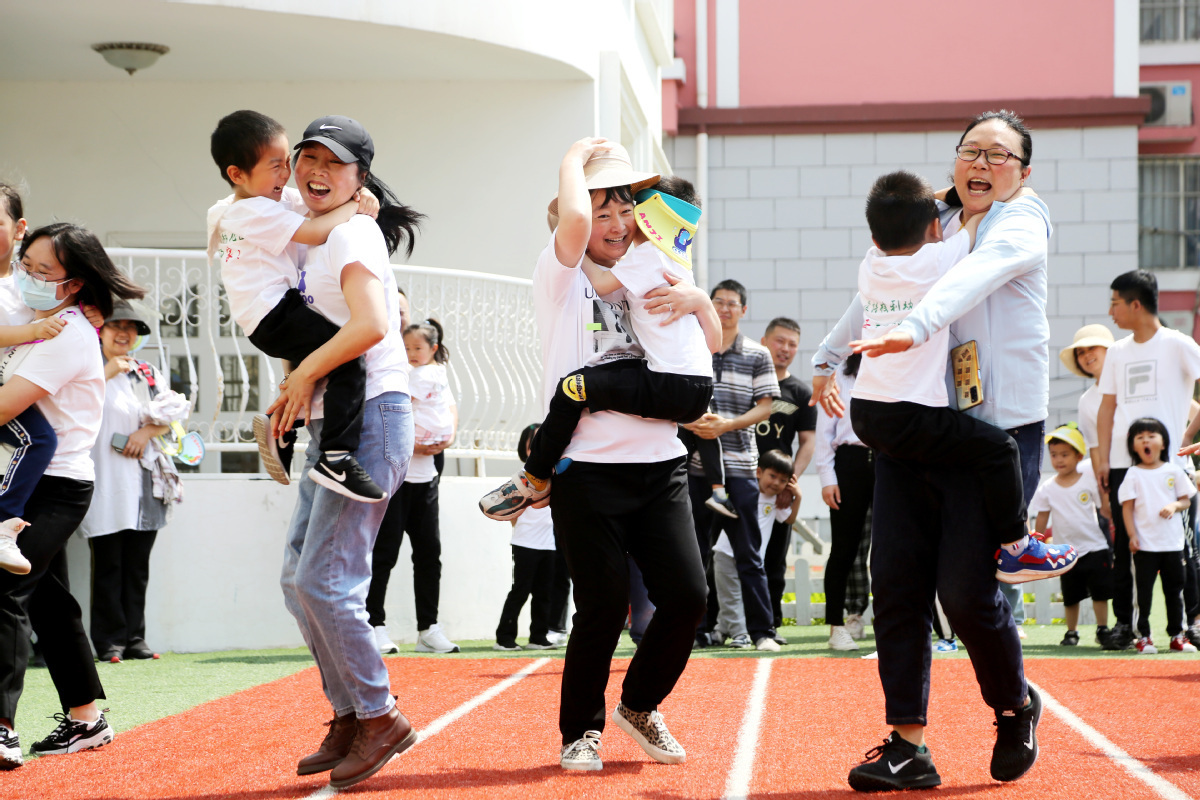 Children and their parents participate in games and activities at a kindergarten in Lianyungang, Jiangsu province, on Sunday. The event was held to mark International Children's Day, which falls on Tuesday. (Photo: China Daily)

China further relaxed the family planning policy on Monday, allowing all couples to have three children in order to deal with the challenge of population aging and improve the country's demographic structure. Announcing the decision one day before International Children's Day, which is observed on June 1 every year, the top leadership also pledged to beef up support for families.

The move also suggests the country's leadership may take more measures to raise the fertility rate in a bid to offset the effects of the rising aging population, especially because China's birthrate is much below the replacement level fertility of 2.1.

According to a population growth theory, countries should strive to achieve a dynamic equilibrium between the total population and the demographic structure.

It is essential to keep the TFR between 2.1 and 2.3 to sustain population levels. Hence, the decision to allow all couples to have three children is a breakthrough in the population policy, as it gives couples more choices in planning their family size.

In an ideal situation, couples should have the choice to decide the number of children they want to have, and the three-child policy, to a large extent, will allow them to do so.

Ideally, like in other countries, couples in China should also have two children each, but the actual number is 1.5. Given the high cost of raising a child, the birthrate could increase only if the government introduces more preferential policies for couples which would ease their parental burden.

Theoretically, the three-child policy should help increase the number of new births, similar to what happened after the universal two-child policy was announced in 2016. And if that increase is above the sub-replacement fertility level－that is, a TFR which, if sustained, leads to each new generation being less populous than the previous one－it can partly offset the impacts of the aging society.

Yet the three-child policy may not increase fertility rates as much as expected because, apart from being deterred by the rising costs of raising a child, many Chinese couples don't want to have a second child, with some not wanting any children at all.

After helping increase new births by an additional 2 million in 2016 and 1 million in 2017, the two-child policy lost its effectiveness, as the fertility rate began declining since 2018. In fact, according to the seventh national census released in May, the number of newborns in 2020 was only 12 million, down 5 million from three years ago.

This shows that easing the family planning policy alone will not increase fertility rates. To improve the demographic structure, therefore, the authorities need to address the root causes of the low fertility rate. For example, in addition to the high cost of education, the physical and mental exhaustion that parents suffer raising children also deters many couples from having more than one child. Not to mention many women are reluctant to give birth because that could mean sacrificing their career prospects.

The new policy may allow all couples to have three children, but the decision to actually do so depends on the couples.

Also, despite the experience of the developed world showing subsidies and preferential policies play a limited role in couples' decision to have more children, it is better to implement supporting measures with the three-child policy than not do anything at all in an attempt to increase fertility rates.

The significance of the three-child policy doesn't lie in its role in increasing new births, but in giving couples a bigger say in planning their families.

The author is a professor at the Institute of Population Research, Peking University.