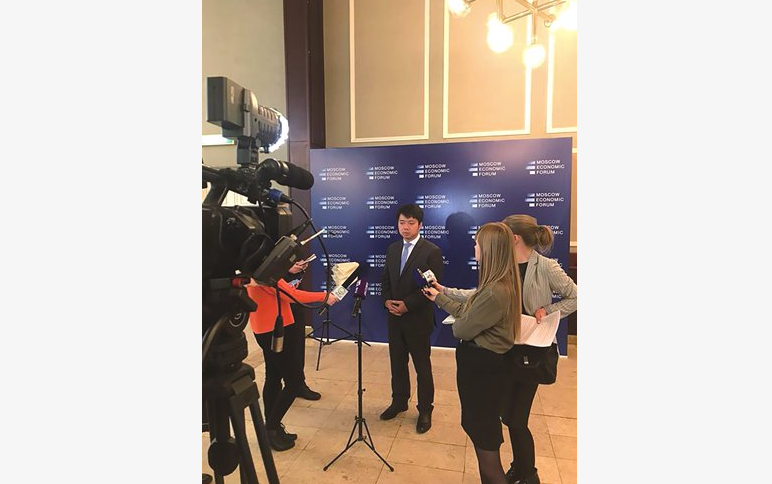 Viewed from the perspective of the law of historical evolution, both China and Russia are at their strongest since the end of the Cold War. The two countries are faced with six near-identical historical missions: attain national rejuvenation, safeguard sovereignty and integrity, promote economic transformation, assume international responsibility, safeguard world peace and promote global development. The question of their common rise is an important topic in Sino-Russian relations in the new era, concerning also the future of the world.

West underestimates China, RussiaDoubts about the reality of China and Russia's rise abound in European and US media. Despite a brief dip at the end of the 20th century, Russia has traversed several halcyon periods in history, such as the era of Peter the Great, the era of Ekaterina and the Soviet era. Since becoming president in 2000, Vladimir Putin has always made it a ruling goal to realize rejuvenation of the Russian nation. In 2017, Russia's GDP and foreign exchange reserves were more than eight and 36 times the figures in 1999, respectively.Russian society has remained essentially stable for the past 18 years, unperturbed by major financial or political crises, ethnic conflicts or mass shootings. Russia's world-leading military and diplomatic influence have located it at the center of almost all major global events. Its influence was enhanced by the 2014 Sochi Olympics and 2018 FIFA World Cup. However, while European and US media might trumpet Russia's impending downfall, China is convinced that its evident development over the past 18 years has set the country on a course of national rejuvenation.Crucially, and more so than either Europe or the US, China respects Russia as a natural power. The world's largest country by land mass, Russia abounds with natural resources, including forests, natural gas, fresh water, coal and iron. Owing to this superiority, Russia has become a natural power. More specifically, many Chinese still profess a nostalgic attachment to the Soviet "Big Brother," and have been grateful for Russian assistance since World War II.Media and public opinion in Europe and the US have a curious habit of misjudging China, with the "China threat" and "China collapse" theories periodic favorites. What they seem to forget or discount is the fact that China, a natural power in its own right, has the world's largest population, second-largest economy and third-largest land mass. After four decades of reform and opening-up, China has become the world's largest trade country, e-commerce country, consumer market and a most promising global power.If Europe and the US truly believed in China and Russia's rise, and that the two are irreversibly set on the path of national rejuvenation, their lack of understanding and respect should decrease substantially.Positive forces for world progressThe Western realist tradition in international relations deems it impossible for two rising powers to live together peaceably. Yet Sino-Russian relations have proven the patent falsity of such nay-saying, becoming the model of global great power relations.Although it has not always been smooth sailing during the Cold War, relations between China and Russia have warmed rapidly since Putin's presidency. The signature on the Comprehensive Strategic Partnership Agreement in 2014 marked a new phase in high-level strategic mutual trust between China and Russia, opening the way to cooperation in many fields.On major global issues, the two countries have displayed close strategic trust and cooperation, maintaining communication and a united stand in the Korean Peninsula and Syrian crises. In global governance, China and Russia have worked together to promote regional cooperation and global governance by leveraging such platforms as the Shanghai Cooperation Organization, BRICS and the G20. Mutual support has also been evinced in major events concerning the two countries. Chinese President Xi Jinping personally attended the 2014 Sochi Winter Olympic Games that were boycotted by the West; joint military exercises held in the sensitive water of the South China and Baltic Seas in 2017 are all expressions of mutual support. On the economic front, China has been Russia's largest trading partner for eight consecutive years.The leaders of both countries have always maintained close personal relations, with Xi and Putin meeting no less than 20 times over the past five years. Foreign Minister Wang Yi noted during the Two Sessions that "Sino-Russian relations can only get better." Historically, few big powers rising simultaneously have shown such a heightened state of strategic mutual trust and global cooperation. Moreover, China and Russia's global responsibility deserves the West's attention. As permanent members of the United Nations Security Council, the two countries have been and remain committed to maintaining world peace and stability. Both China and Russia are signatories to the Non-Proliferation Treaty, Chemical Weapons Convention, Biological Weapons Convention and Comprehensive Nuclear-Test-Ban Treaty. They have also actively and consistently called upon the international community to participate in global denuclearization.The 21st century has been ravaged by such negative and adverse events as the 9/11 attacks, the wars in Afghanistan and Iraq, the global financial crisis, terrorism in the form of IS, refugees, as well as anti-globalization and anti-free trade sentiment. Far from being instigators or causes of these major events, China and Russia are key forces for safeguarding positive world development. The two countries advocate maintenance of the post-World War II international order by supporting globalization, the fight against climate change, reforming the international system, combating terrorism and opposing populism. China and Russia, both in the process of rejuvenation, are positive and stable forces for world progress.

Global problems call for global reformChina and Russia's development benefits not only from deep cooperation in a stable and peaceful international environment, but is also inextricably tied to internal reform and foreign cooperation. China and Russia should join forces and continue acting as agents for global peace and stability, win-win cooperation and evolutionary transformation.First, China and Russia should continue to maintain world peace in the face of war, separatism, terrorism, as well as the threat of trade, financial and information wars. At present, the Trump government is provoking a trade war, systematically undermining international institutions through various withdrawals. It is becoming a factor of global uncertainty, and the world should come together to guard against it. In the same vein, a strong Russia and China contribute to world peace. As global natural powers, the two countries bear the mission of national rejuvenation. In March 2018, China completed a new round of political transition. It is accelerating its commitment to national reunification and support of the hard-won détente and stability on the Korean Peninsula. In this regard, the world should better understand and support China's efforts.Second, the world should strengthen strategic interfacing and promote the next round of national development through comprehensive cooperation. The considerable current "development deficit" should be cured by deepening cooperation instead of blaming others, as some Western media and leaders have done. Five years ago, China pushed forward the next round of economic globalization by launching the Belt and Road Initiative (BRI), which saw the signing of cooperation agreements with more than 80 countries and international organizations. During the Belt and Road Forum for International Cooperation in May 2017, China and Russia engaged in cooperation on connecting the BRI and Eurasian Economic Union, with the "Silk Road on Ice" being a major component. On December 8, production began on the first line of the joint Sino-Russian Yamal LNG program, representing a major achievement in connecting cooperation. China welcomes increased European and US involvement in this initiative. Launched by the US, the trade war is most inimical to international cooperation and an important factor affecting globalization. China is not its sole victim, and the international community should work together to deal with the threat.Third, reform should become a universal world value. Global problems can only be solved by global reform. 2018 marks the 40th anniversary of reform and opening-up in China. China owes much of its achievements to large-scale, effective reform and opening-up to the outside world. China's current deepening of reform also provides opportunities for promoting the structural transformation of its economy, freeing up space for economic development. Since coming to power, Putin also initiated wide-ranging reform in areas such as politics, the economy and the military. Internal reform is, therefore, a means of overcoming resistance to economic development and strengthening the inner driver for national development.Transformation of the current system of global governance coheres with the general trend of historical development. China plays an active role in this historical process, advancing positive reform of the international community. China's Asian Infrastructure Investment Bank and the BRI are important measures for filling the gap in international public goods, reducing the development deficit and promoting global reform. In recent years, China and Russia have played pivotal roles in promoting reform of the old and unfair world order. The BRICS bank established by the two countries supplies fresh ideas for promoting world financial reform. It goes without saying that reform needs more than simply overthrowing the existing structure and building anew. It must also account for current developments.In sum, the common rise of China and Russia is the rejuvenation of peace and cooperation. Reform is an important guarantor of peace and promoter of cooperation. Both countries are committed to promoting shared rejuvenation, a theme that accords with the national development priorities of many countries and coheres with their long-term interests. Yet one would be wrong to think of rejuvenation as a zero-sum game. Rather, it is a process of cooperation. Only joint reform can promote common rejuvenation.