OPINIONS A dark dungeon under 'shining city upon a hill'

A dark dungeon under 'shining city upon a hill'

When America's founding fathers decided to take up arms against their British lords and seek independence, their ideal was to build a whole new nation free from oppression and persecution. 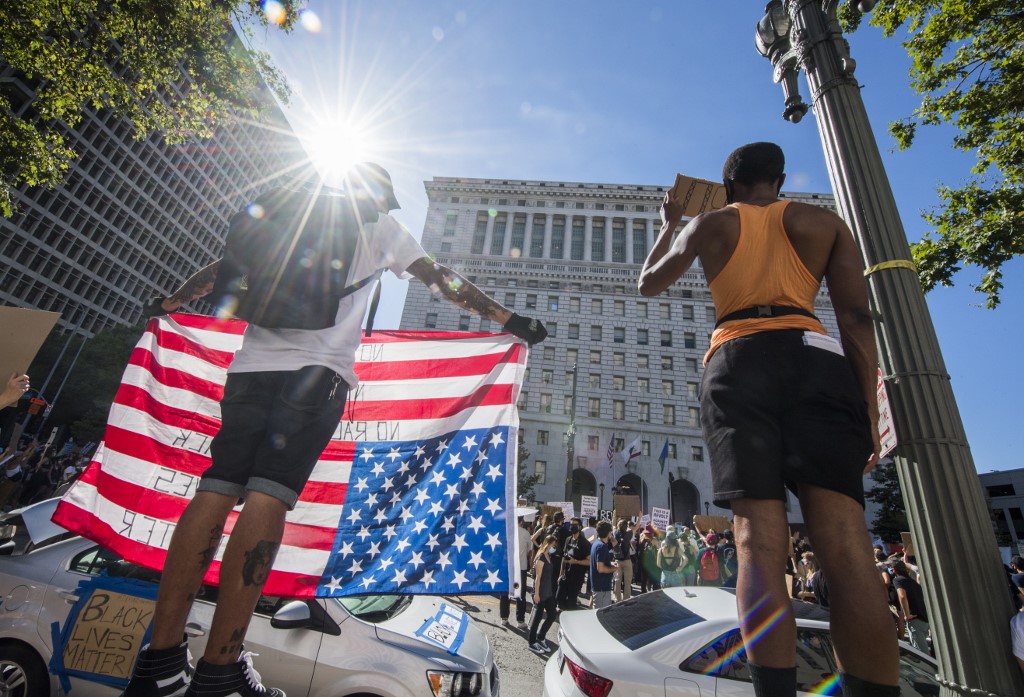 Supporters of Black Lives Matter, wave a US flag during a protest outside the Hall of Justice as they demonstrate against the death of George Floyd, in Los Angeles, California on June 10, 2020. (File photo by AFP)

After so many years, however, the ideal is far from being turned into reality. The tragic death of George Floyd at the hands of a white police officer last month in the US city of Minneapolis has struck as a reminder that beneath the so-called "shining city upon a hill," there is a dark dungeon where the demon of racial discrimination is imprisoning and persecuting America's people of color.

Racial problems have been deeply embedded in the genes of the United States. In the early days of the country, slavery was implicitly permitted in the original Constitution although the Declaration of Independence states "all men are created equal."

Given the progress made throughout the centuries in promoting the basic human rights of the blacks and other minority groups, the specter of racial discrimination continues to haunt the country.

In a recent livestreaming discussion of police reform over the death of Floyd, former US President Barack Obama admitted that racial inequality and oppression are still deeply rooted in America's social life.

According to a 2019 study by Pew Research Center, a US nonpartisan fact tank, a majority of adults say blacks are treated less fairly than whites in encounters with police and by the criminal justice system. And racial discrimination and limited access to quality education and high-paying jobs are considered as major reasons why black people in the United States are having a harder time than white people getting ahead.

The ongoing coronavirus pandemic has only made the lives of the Black Americans worse and aggravated the racial tensions.

Recent data compiled by the non-partisan APM Research Lab show that African Americans are dying at a rate of 50.3 per 100,000 people, compared with 20.7 for white people during the deadly pandemic.

Charles M. Blow, a New York Times opinion columnist, warned recently in an opinion piece that "We may be waiting for a racial time bomb to explode with this disease."

Yet it seems that there is no clear and viable path to defusing that ticking bomb, which is now threatening to tear apart the "shining city upon a hill," the almost biblical icon of the hypocritical "American exceptionalism."

As the racial pathogen and the novel coronavirus keep plaguing the United States, the social fabric of the country today seems falling further apart.

The yawning wealth gap between the whites and non-whites persists; politics have become immensely polarized; the elbow room for political consensuses over major issues like universal health care and other entitlements seems only to exist in theory; and the cultural diversity, which Americans used to celebrate as a source of their vitality, has become a force that pits one group of Americans against another.

Facing this increasingly fractured society, politicians of both political parties in Washington seem to have been both powerless and reluctant to solve the long-standing racial problems over the years.

What is worse is that some in the current White House, notably US Secretary of State Mike Pompeo, even try to take advantage of the explosive racial conflicts for political gains, and pass the buck to their domestic political opponents, and even foreign governments.

Thomas Friedman, an American political commentator, recently cautioned in the New York Times that the United States is "edging toward a cultural civil war."

In its Civil War, the United States was lucky to have Abraham Lincoln, who was determined to heal the nation's wounds "with malice toward none, with charity for all" when guns were laid down. However, at the current moment as America's racial problems fester, one can only realistically expect that the dark dungeon is going to be further fortified and much more crowded.