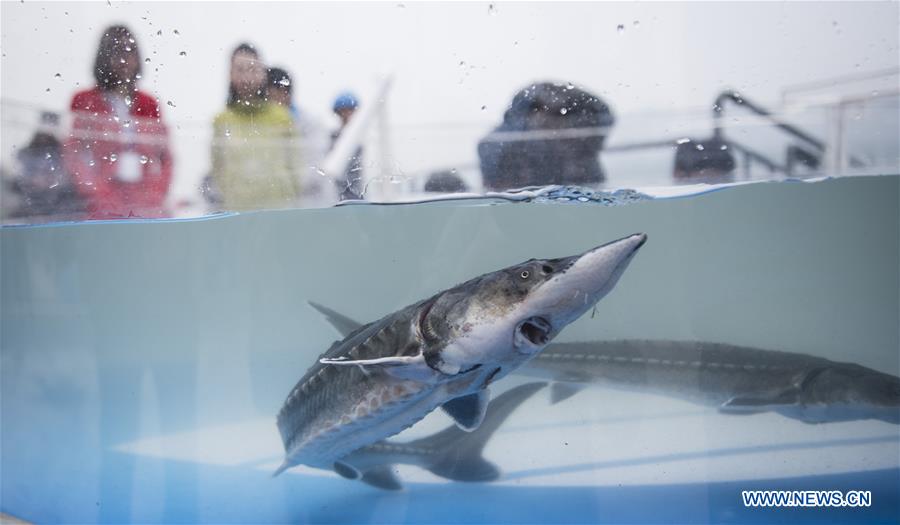 Photo taken on April 13, 2019 shows Chinese sturgeons about to be released to the Yangtze River in Yichang, central China's Hubei Province. Altogether 700 captive-bred Chinese sturgeons were released Saturday into the Yangtze River. This is the 61st release by the Chinese Sturgeon Research Institute of China Three Gorges Corp., which has introduced about 6 million sturgeons to the wild since the 1980s. Believed to have lived at the same time as dinosaurs, the Chinese sturgeon has existed for more than 140 million years. The fish is under top national protection. (Photo: Xinhua)

In 2015, an official survey found 1,864 giant pandas in the wild. In comparison, there are about 100 Chinese sturgeons that swim back to the Yangtze River to spawn every year.

It is hoped the release of the 700 Chinese sturgeons into the wild will help inject new vitality into the species that has a history of at least 140 million years. The fish include both young and adult sturgeons to enrich the species' population using different age groups. And to boost the survival rate of the species in the wild and enhance genetic diversity, more male sturgeons have been released to adjust the gender imbalance.

However, such moves have proved ineffective in the past as there are many more things that need to be done in order to protect the endangered species.

Adult Chinese sturgeons live in the sea, but the females swim about 3,000 kilometers up the Yangtze River every year in order to lay their eggs. The building of dams means the sturgeon's annual migration has been severely shortened. In 1981 when the Gezhouba Dam began operating in the upper reaches of the Yangtze River. The dam shortened the sturgeon's annual migration by 1,175 kms and reportedly caused the reproductive rate to drop by more than 75 percent. Other dams have been built since then, yet none with a channel that would allow passage for the fish. While it is necessary to exploit the hydropower and other water resources of the Yangtze River, it is also necessary to leave a means for the fish to migrate.

Another problem with the dams is they have changed the water temperature of the river, as the reservoirs behind the dams soak up heat from the sun which is then discharged downstream. Sturgeons are cold water fish and the warmer water messes up their reproductive cycle. To help maintain a steady water temperature, dam managers could selectively release water from the reservoir to try and maintain a stable temperature downstream.

Another threat to Chinese sturgeons is, of course, the insatiable human appetite. For a long time, the adult females were sought after for their caviar and sturgeon meat was popular. It might be hard to imagine that people could eat a species that is so scarce it is on the brink of extinction, but even today when you search on baidu.com, questions like "How to cook a Chinese sturgeon" and "Are Chinese sturgeons delicious" will automatically follow. Such information should be forbidden, so as to avoid encouraging the demand for the fish.

And it should go without saying that another necessary measure is preventing any polluting of the river. So there is a lot more that needs to be done besides releasing the 700 Chinese sturgeons into the wild if the species is to survive.