OPINIONS A long winding way for peace on Korean Peninsula

A long winding way for peace on Korean Peninsula

Resolving the Korean Peninsula issue is like trekking through a long tunnel. A faint pinpoint of light has emerged, yet there is still a long way to go. 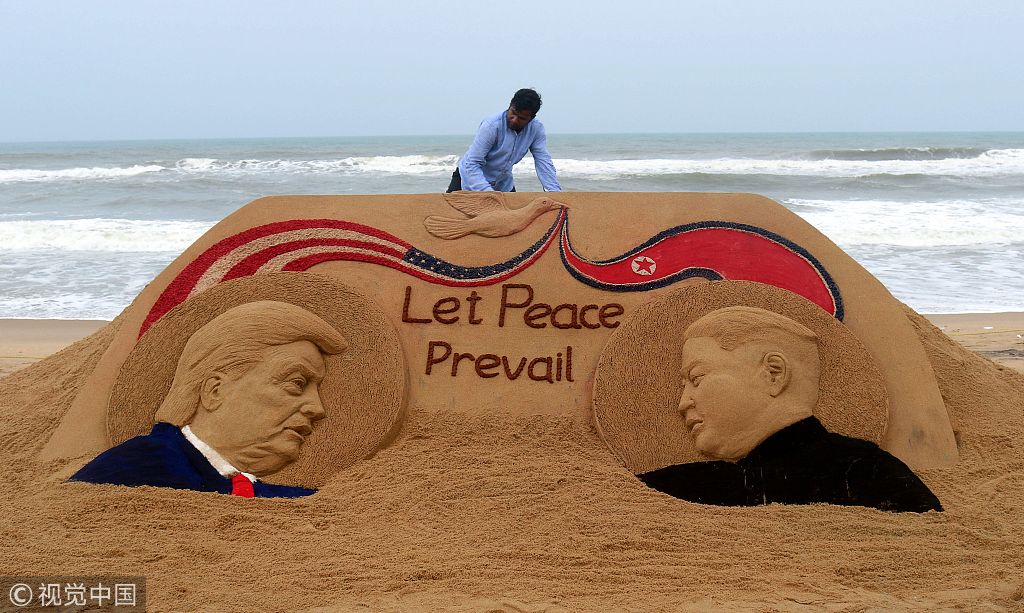 Indian artist Sudarshan Pattnaik, 65, finishes a sand sculpture depicting US President Donald Trump and North Korean leader Kim Jong Un at Puri beach, some 65 km away from Bhubaneswar on June 11, 2018, ahead of the US-North Korea summit. Kim Jong Un and Donald Trump will meet on June 12 for an unprecedented summit in an attempt to address the last festering legacy of the Cold War, with the US president calling it a "one time shot" at peace. (Photo: VCG)

"There is no longer a nuclear threat from North Korea," US President Donald Trump tweeted earlier this month, yet on Friday, he declared that Pyongyang still poses an "extraordinary threat" to the US, and left Washington's economic sanctions on North Korea unchanged. Apparently, the Korean peninsula issue, caused by the leftover long-term remnants of hostility from the Cold War, can hardly be cleared up overnight.

Optimistic prospects for a resolution, similar to the Singapore summit between Trump and North Korean leader Kim Jong-un, have happened before in history. In 1994, Pyongyang and Washington signed an agreed framework in Geneva, in which North Korea accepted to freeze its nuclear program in exchange for fuel oil and the construction of light-water reactors provided by the US.

The deal, which was quite close to denuclearization, was implemented smoothly at the beginning. North Korea shut down its reactor at Yongbyon and stopped construction of two other reactors. Yet once Washington believed the country no longer had nuclear capability, it was reluctant to continue providing resources to Pyongyang. Due to existing US bipartisan opposition to the agreement and reports that North Korea had secretly maintained a program to enrich uranium, Washington stopped its aid and Pyongyang withdrew from the Nuclear Nonproliferation Treaty.

Similar ups and downs were repeated during the following decades of George W. Bush and Barack Obama's presidencies.

They proved that trust takes a long time to build, yet only an instant to be destroyed. Deep distrust between the West, Washington and Pyongyang still exist, with many reports and articles criticizing the North Korean government for its "tyranny" and "appalling human rights." Some people in the US still insist that Pyongyang needs a government change, which makes North Korea vigilant.

Whether and how the US will lift North Korea sanctions is in the hands of the US. When the White House ponders the question, do the interests that tension on the peninsula has brought it factor heavily on its decision?

More importantly, when the crisis on the peninsula is resolved, will the US withdraw its forces from South Korea and Japan? Where is the US-Japan-South Korea trilateral military alliance heading?

The alliance was established during the Cold War, but it is not aimed solely at North Korea. It is the pretext of US military presence in the Asia-Pacific region though such presence is directed against multiple rivals.

All these questions indicate that resolving the Korean Peninsula issue will be a complicated and long journey, and one that China must do its part to guide to completion. Over the years, Beijing has become a reliable consultant by promoting the Six-Party Talks, dual-track approach, etc. Its role and wisdom in resolving the crisis will be further needed in the future. Especially now, China must work to prevent the US-North Korea denuclearization framework deal from being torn up like the 1994 agreement.