A milestone in peninsula peace process 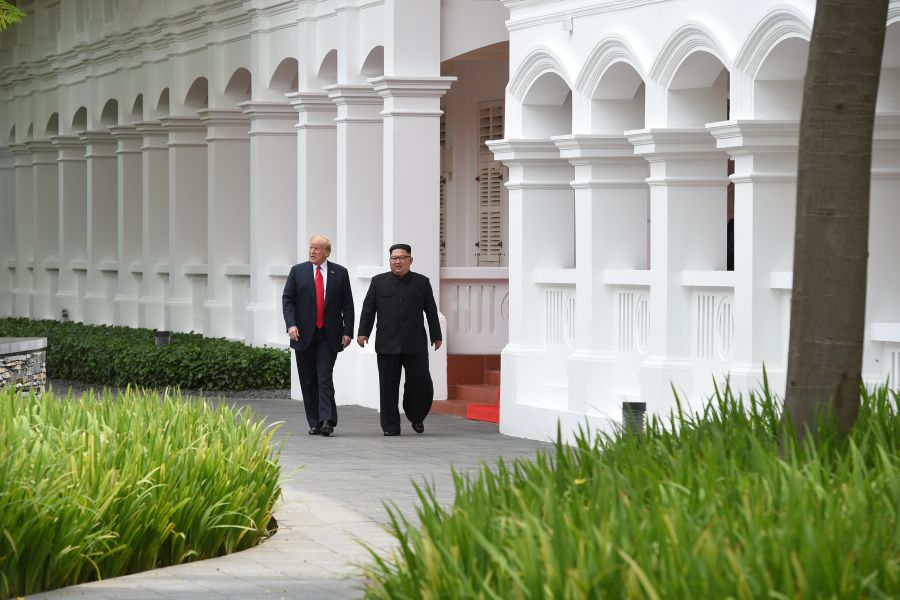 US President Donald Trump walks with the DPRK's top leader Kim Jong-un at the Capella hotel on Sentosa island in Singapore on Tuesday. (Photo: Agencies)

Editor's note: The Democratic People's Republic of Korea leader Kim Jong-un and US President Donald Trump held a path-breaking meeting, the first between the incumbent leaders of the two countries, in Singapore on Tuesday, and signed a joint statement on the denuclearization of the Korean Peninsula and peace process. Three experts share their views on the historic summit with China Daily's Pan Yixuan. Excerpts follow:

A silver lining in the peace process

Xie Guijuan, a professor of international politics at Yanbian University

A normal US-DPRK relationship is the base on which Pyongyang and Washington can build mutual trust, in order to reach a consensus on the concrete actions to be taken for the denuclearization of the Korean Peninsula.

The joint statement issued by the United States and the DPRK to end hostilities and provocative actions has raised hopes for permanent peace after several setbacks in the peninsula peace process.

At the Third Plenary Meeting of the 7th Central Committee of the Workers' Party of Korea on April 20, Kim Jong-un announced the DPRK's focus was now on economic development, for which it requires peace on the peninsula and communication with the international community. And since its tough stance in the past could not resolve the DPRK nuclear issue, Washington might consider changing its hostile policy toward Pyongyang to reach a final solution.

Although Trump pulled the US out of the Iran nuclear deal, he has shown determination to address the peninsula nuclear issue. As such, Trump should revisit the Joint Statement issued by the Six-Party Talks on Sept 19, 2005, that advocated mutual respect between the two countries and gradual normalization of US-DPRK relations.

Besides, there were signs that the US and the DPRK had reached agreements on crucial issues before the Kim-Trump summit. Rodong Sinmun, the official newspaper of the DPRK, reported on June 11 that Kim would exchange views with Trump on "establishing new DPRK-US relations", and "building a permanent and durable peace-keeping mechanism on the Korean Peninsula".

The two countries' joint statement for peace reflects their sincerity. Pyongyang has committed to complete denuclearization and Washington, in response, has agreed to halt joint military exercises with the Republic of Korea and improve bilateral relations with Pyongyang. Much time and efforts are needed to realize permanent peace on the peninsula, and the two countries should continue respecting each other's principal demands－the US' demand for denuclearization and the DPRK's demand for security－and negotiate a road map to improve relations and restore permanent peace on the peninsula.

The Trump-Kim meeting is a milestone in the peninsula peace process. Judging by the joint statement on complete denuclearization and new US-DPRK relations, the summit bore great fruits.

The "comprehensive, in-depth, and sincere exchange of opinions" changed the hostile tone of US-DPRK relations, and showed that Trump and Kim are determined to peacefully resolve the disputes.

What's more, the two countries vowed to make sincere efforts to continue the talks, saying high-level officials would later meet to devise a detailed plan for the implementation of the agreement.

But Pyongyang and Washington accomplished only part of their goals. The DPRK may not completely denuclearize "very soon", as the US expects because it considers its nuclear program an important bargaining chip, and the US will not lift sanctions against the DPRK now because it believes it was because of the strict sanctions that Kim agreed to the summit.

Still, the summit is a landmark in the peninsula peace process, and the world hopes the two countries will advance together on the peace road.

Wang Sheng, a researcher at the Co-Innovation Center for Korean Peninsula Studies and professor of International Politics at Jilin University

The results of the US-DPRK summit were better than expected. The joint statement has raised the prospects for peace on the peninsula.

The improvement in US-DPRK relations and Washington's security guarantee met Pyongyang's demand. And the DPRK agreed to complete denuclearization, meeting the US' principal demand. The US-DPRK agreement will ease the tensions on the peninsula and promote development in Northeast Asia.

Trump even invited Kim to visit the US when they signed the joint statement, and at his news conference, he said more talks would be held between the US and the DPRK. Trump and Kim, in fact, expect bilateral communication to continue. And if they continue talking, more detailed agreements, permanent peace, and complete denuclearization of the peninsula will be gradually achieved.

The US-DPRK summit is a good beginning for the peace process, and if the two countries hold more fruitful talks, more countries will join the peace process because the Korean Peninsula issue is not only complicated but also of great concern to many other countries. Ultimately, a multilateral mechanism and joint efforts of all parties concerned will be needed to establish permanent peace in the region.

And China, which has always advocated peaceful resolution to the peninsula issue, will support the US and the DPRK to build mutual trust, reach more consensuses and make substantial progress in denuclearization and the peace process. As Foreign Minister Wang Yi said, China will continue to play a constructive role in bringing peace to the peninsula.