OPINIONS A tale of two COVIDs

A tale of two COVIDs 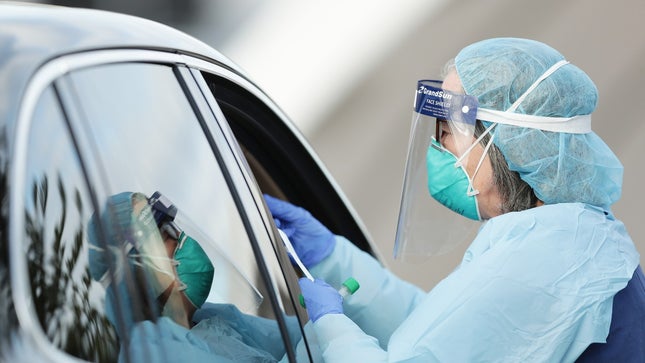 The beginning of this COVID-19 story is not in Wuhan. In July 2019, I traveled on a Chinese cruise ship departing and returning to Tianjin. Passengers came from all over China. I returned to Australia with what I thought was a dose of the flu. It felt like a seasonal flu but it quickly came to be characterized by a deep, dry, persistent cough that was simply physically exhausting, partly because it continued all through the night. A colleague who traveled with me on the same cruise was unaffected.

OK, you have heard this story before, but not so fast. Note that was July 2019.

My local doctor treated this as a case of the flu and prescribed the usual symptomatic solutions, including a prescription-strength cough suppressant. It didn't make any difference.

Only some of my family picked up a very minor dose of my flu. None of them experienced the persistent painful coughing or shortness of breath. My flu remained a unique medical event in my community.

A few weeks later, I returned to Singapore for work, and what I still thought of as an unusually persistent case of the flu, seemed to get worse. The cough became substantially worse and persisted all night. I developed a fever and some interesting hallucinations. The next day, too exhausted to get out of bed, I cancelled all my appointments and stayed in the hotel room. I hoped the fever had broken the flu.

Not so, at least in terms of the never-ending cough and shortness of breath. Upon my return to Australia, I saw the doctor again. He prescribed very strong antibiotics to stop any potential for broader infection.

The relentless coughing finally stopped some 12 weeks after my initial infection, although some symptoms continue to this day, including shortness of breath, unreasonable tiredness and some muscle aches that will not go away. What is now described as "brain fog," I treated as a result of sleep deprivation due to endless coughing. I lumped the persistent mild headaches into the same category and gobbled more Panadol in a few months than I had consumed in the previous two decades.

Why should he do any different? Apart from the persistent dry, deep-seated cough, my symptoms were pretty much those of a seasonal flu combined with exhaustion due to lack of sleep and a busy international travel schedule. Like any local doctor, he did not have the authority to cry "pandemic" even if he suspected it was something other than the flu.

A friend on a Pacific cruise filled with Europeans in October 2019 was hospitalized in Australia on her return with symptoms consistent with the severe "proto-COVID-19" flu. No alarm was raised by medical authorities.

During a bitter December winter when some patients began to present in Wuhan with an unusually severe flu, it was initially treated in the same way as it was by my doctor. In those early days, there was no indication that this was anything other than a severe seasonal flu which was not particularly infectious in a population of 11 million. We now know the virus was mutating, just as it later did in India and Brazil. In Wuhan, local doctors reported up the health chain of responsibility and when this was recognized as a new and highly infectious virus, the authorities acted quickly with Wuhan and later, national lockdowns.

With the benefit of hindsight, it's easy to say they should have acted sooner, but doctors on the ground, just like my doctor in Australia, initially had no reason to think they were dealing with anything other than a severe version of a seasonal flu.

U.S. President Joe Biden and others have now turned the focus on COVID-19 escaping from a lab rather than animal-to-human crossover. He continues to commit the fundamental error of logic. Although COVID-19 was first identified in Wuhan, it does not mean that it is where it originated.

It's my story, and the stories of others like me, that make Biden's investigation misdirected. He would be far better advised to direct time and funding to the World Health Organization's scientific investigation teams to enable them to identify the early global sources and growth of COVID-19.